Joseph Rainey: First African American to Serve in the U.S. House of Representatives 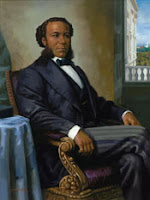 Born on June 21, 1832 into slavery, Joseph Hayne Rainey was the first African American to serve in the U.S. House of Representatives. He was also the longest-serving African American to hold the office during the Reconstruction period.
Joseph’s father was a barber who was allowed to work independently provided he shared some of his profits with his owner. Eventually, he saved enough money to purchase his family’s freedom sometime in the early 1840s. In 1846, he moved the family to Charleston where he obtained a job as a barber at the prestigious Mills House Hotel. Joseph and his brother Edward received minimal formal education, instead learning their father’s trade.
In 1859, Joseph traveled to Philadelphia where he met and married his wife,

Susan, a woman of French and African descent from the West Indies. Nothing is known about the trip or why he didn’t remain in Pennsylvania. Instead, Joseph and his wife returned to Georgetown, South Carolina where he was conscripted into the Confederate Army in 1861. Records indicated he initially dug trenches, then later worked as a cook and steward aboard a blockade runner. Perhaps this is how he managed to escape with his wife to Bermuda in 1862.
The self-governed British colony had abolished slavery in 1834, so the Raineys set up a barber shop and a dress shop that thrived in the healthy economy. After learning the war had ended with a Union victory, they returned to Charleston in 1866, then later to Georgetown.
As a wealthy man, Joseph’s stature in the community increased and he soon became involved in politics, specifically the Republican party. A state constitutional convention was called in 1868, and he went to Charleston to represent Georgetown. The following year he attended a state labor commission and served as a census taker. By the late 1860s he worked as an agent for the state land commission and was a brigadier general in the state militia. He won a seat in the state senate in 1870 and became chairman of the finance committee.

Two weeks later Representative Benjamin F. Whittemore resigned, having been charged with selling appointments to U.S. military academies, and Joseph was nominated to fill the rest of Whittemore’s term. He won the full term with sixty-three percent of the vote and was sworn in on December 12, 1870, thus becoming the first African American to serve in the U.S. House of Representatives. He did well for his constituents and won re-election three times, serving until March 3, 1879.
In 1861, Joseph started a brokerage and banking business, but the firm didn’t succeed and ceased operations five years later. He then managed a coal mining operation and wood yard before his health began to decline. He moved back to Georgetown where he passed away on August 1, 1887, leaving his wife and three sons.
________________________

Linda Shenton Matchett writes about ordinary people who did extraordinary things in days gone by. A volunteer docent and archivist for the Wright Museum of WWII, Linda is also a trustee for her local public library. She is a native of Baltimore, Maryland and was born a stone’s throw from Fort McHenry. Linda has lived in historic places all her life, and is now located in central New Hampshire where her favorite activities include exploring historic sites and immersing herself in the imaginary worlds created by other authors. Learn more about Linda and her books at http://www.LindaShentonMatchett.com.
Legacy of Love (Keepers of the Light, 10)

Escaping Boston to avoid a marriage of convenience aimed at garnering society’s respect for her family name in the shadow of her father’s war profiteering, Meg Underwood settles in Spruce Hill, Oregon. Despite leaving behind the comforts of wealth, she’s happy. Then the handsome Pinkerton agent, Reuben Jessop, arrives with news that she’s inherited her aunt’s significant estate, and she must return home to claim the bequest. Meg refuses to make the trip. Unwilling to fail at his mission, Reuben gives her until Christmas to prove why she should remain in Spruce Hill and give up the opportunity to become a woman of means. When he seems to want more than friendship, she wonders if her new-found wealth is the basis of his attraction.
Purchase/KU Link: https://amzn.to/3nMgxqK
Posted by Linda Matchett at 12:30 AM