I can’t remember a time when I didn’t have my Christmas stocking. My Great-Grandma Zola (GG, on my mom’s side), crocheted it for me before I can remember. I always had this stocking growing up.

Each year, my mom—er—I mean Santa—filled it with the same kinds of things.
~A candy cane of some sort stuck out of the top—some times a regular one, some times one of those big, thick, straight ones that were about a foot long and as big around as a closet rod or one of those plastic tube canes filled with another kind of candy like M&Ms.
~Other candy—often Almond Roca. Mmmm!
~A small gift or two.
~A variety of shell-dwelling nuts.
~And deep down in the toe an orange! Always an orange.

My siblings and I immediately dumped the nuts back into the nut bowl on the table and unwrapped the gifts while eating the candy.

But where did this tradition of Christmas stockings come from?

I found two different origins of this tradition.

The first is probably the most well known as being associated with Saint Nicholas. Nicolas was a nobleman born March 15, 270 AD and died December 6, 343 AD. He became a Christian bishop in Myra in ancient Greece. He used his wealth to help the poor. He heard about a merchant who had lost his fortune. He had three daughters, and because he had no money for dowries for them, they wouldn’t be able to marry and would likely have to become prostitutes. Wanting to help, Nicholas went under the cover of night and threw three bags of gold in through the window, one for each daughter as a dowry. Legend says one or more of them landed in one of the girls’ stocking. 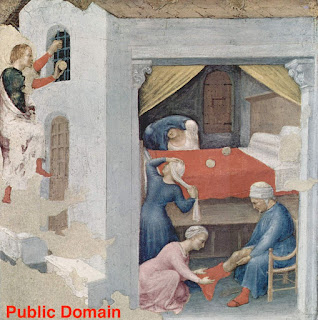 Another source is a Dutch legend. A Netherlands folklore tells of a man called Sinterklaas and his assistant Zwarte Piet (Black Pete) who would annually dock in different towns. After disembarking, they traveled around on a white steed and a mule. Children impatiently waited for them and would put hay and carrots in their wooden shoes for the animals. Sinterklaas, Zwarte Piete, the horse, and the mule would enjoy the treats. Sinterklaas would reward the children’s kindness and devotion by leaving small gifts, like candy, miniature toys, ornaments, and nuts in shells. When Dutch immigrants settled in America, they shared this tradition with their neighbors. Sinterklaas eventually became Santa Claus, and stockings replaced the wooden shoes. 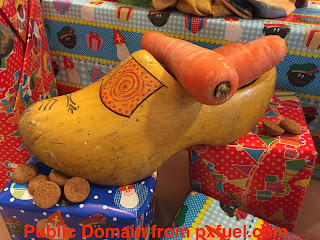 My guess is that our current tradition is a morph and evolution of these two.

Does your family do stockings?

THIMBLES AND THREADS: 4 Love Stories Are Quilted Into Broken Lives 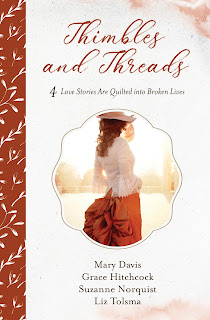 Enjoy four historical romances that celebrate the arts of sewing and quilting. When four women put needle and thread to fabric, will their talents lead to love? #thimblesandthreadscollection
Click HERE to order yours today.
FREE Preview
“Bygones” by Mary Davis (1st Place 2020 Selah Awards winner)
Texas, 1884
Drawn to the new orphan boy in town, Tilly Rockford soon became the unfortunate victim of a lot of Orion Dunbar’s mischievous deeds in school. Can Tilly figure out how to truly forgive the one who made her childhood unbearable? Now she doesn’t even know she holds his heart. Can this deviant orphan-train boy turned man make up for the misdeeds of his youth and win Tilly’s heart before another man steals her away?

Other stories in this collection:
“The Bridal Shop” by Grace Hitchcock,

and “Binding Up Wounds” by Liz Tolsma

MARY DAVIS s a bestselling, award-winning novelist of over two dozen titles in both historical and contemporary themes. Her 2018 titles include; “Holly and Ivy” in A Bouquet of Brides Collection, Courting Her Amish Heart, The Widow’s Plight, Courting Her Secret Heart , “Zola’s Cross-Country Adventure” in The MISSAdventure Brides Collection , and Courting Her Prodigal Heart . 2019 titles include The Daughter's Predicament and “Bygones” in Thimbles and Threads. She is a member of ACFW and active in critique groups.
Mary lives in the Pacific Northwest with her husband of over thirty-five years and two cats. She has three adult children and two incredibly adorable grandchildren. Find her online at: