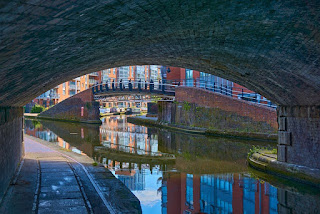 When people think of cities built on canals, Birmingham, England is not the first place that comes to mind. Rather with its 118 islands separated by twenty-six miles of canals and linked by over 400 bridges, Venice, Italy is the most well-known. However, intriguingly, Birmingham has more than thirty-five miles of canals with the city.
Canals are called artificial waterways if they are used for carrying vessels to transport goods and people, and aqueducts if they carry water supply. In most cases, the engineered works have a series of dams and locks that create reservoirs of low speed current flow. A canal is also known as a navigation when it parallels a river and shares part of its waters and drainage basin.
The first canal built in Birmingham was constructed between 1768 and 1772 from the edge of Birmingham at Newhall Wharf to meet the Staffordshire and Worcestershire Canal at Aldersley. A second canal followed in 1784. As the network of canals expanded, the companies building them merged in 1794 to become Birmingham Canal Navigations. At its working peak, BCN contained over 160 miles of canals. The BCN is built on three main levels, each with its own reservoir linked by locks at various locations on the network.
For nearly 170 years the canal system bustled with activity. During the Industrial

Revolution, the canals were used to transport coal from the Duke of Bridgewater’s mines in Manchester, iron, and other heavy goods, playing a crucial role in the development of Birmingham and the Black Country. Toward the end of the 19th century the tonnage of goods carried is reported to reached eight and half metric tons. Known as the “first manufacturing town in the world,” Birmingham was referred to as the “City of a Thousand Trades” after achieving city status in 1889.
However, before that the city became home to Cadbury’s first production facility on Bull Street in 1824. It is thought that Roald Dahl’s Charlie and the Chocolate Factory was inspired by his visit to the facility. Two decades later, the city was the location of the first official tennis matches (long before Wimbledon). J.R.R. Tolkein lived in Birmingham during his early life, and many scholars agree that the areas of King’s Heath and Sarehole probably inspired his hobbits’ homes.

Eventually railways and roads took over the long distance transportation of freight, and use of the canals decreased. By 1980, all commercial traffic had stopped, and the canals fell into disrepair. Over the years many were restored and as a result housing, shops, restaurants, and bars now line the sides of these historic waterways.
Have you ever traveled on a canal?
_______________

Linda Shenton Matchett writes about ordinary people who did extraordinary things in days gone by. A volunteer docent and archivist for the Wright Museum of WWII, Linda is also a trustee for her local public library. She is a native of Baltimore, Maryland and was born a stone’s throw from Fort McHenry. Linda has lived in historic places all her life, and is now located in central New Hampshire where her favorite activities include exploring historic sites and immersing herself in the imaginary worlds created by other authors. To learn more about Linda and her books visit http://www.LindaShentonMatchett.com

Legacy of Love (Keepers of the Light, 10) Escaping Boston to avoid a marriage of convenience aimed at garnering society’s respect for her family name in the shadow of her father’s war profiteering, Meg Underwood settles in Spruce Hill, Oregon. Despite leaving behind the comforts of wealth, she’s happy. Then the handsome Pinkerton agent, Reuben Jessop, arrives with news that she’s inherited her aunt’s significant estate, and she must return home to claim the bequest. Meg refuses to make the trip. Unwilling to fail at his mission, Reuben gives her until Christmas to prove why she should remain in Spruce Hill and give up the opportunity to become a woman of means. When he seems to want more than friendship, she wonders if her new-found wealth is the basis of his attraction.
Purchase Link: http://www.amazon.com/dp/B08LBWJMXR
Posted by Linda Matchett at 12:30 AM