(All photos are mine.) 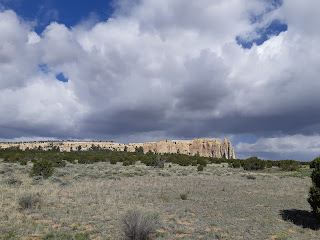 A while back, I think in 2017, my Navajo mentor and his wife took me and my Partner in Crime on a day trip around South East New Mexico. One stop was a place called El Morro. We only had a short time to scope the place out and regretted that we couldn't stay and explore.

Now, if you haven't heard of El Morro, here's the Reader's Digest version...

El Morro is situated on a pre-historic Zuni-Acoma trade route in South East New Mexico, and has been a rest stop and watering hole for thousands of years. In 1605, Spanish explorers came upon the sandstone bluffs, and the literal oasis in the high desert. They found not only abundant water, but ancient petroglyphs, and an ancient village atop the cliffs. From that point on, travelers left their names, dates, and often some indication of what brought them this far into what was then tribal lands uncharted by non-Indigenous invaders or explorers. 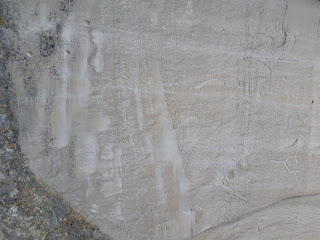 Fast forward to a trip in May 2019, for which we planned and researched down to the mornings, afternoons, and evenings. So after a fabulous visit to White Sands, and a drive across Southern New Mexico which involved a high-speed police chase with some drug-smugglers (no, they were not after us) we made it to El Morro and our accommodations (that's another story...oh my, a second floor in a cabin should actually be more than a bed with a foot of headroom).

After breakfast at a nearby diner (like, twenty feet away) we packed up our snacks, water, hats and backpacks and headed back into the past.

Since El Morro is in the high desert, it was already at an altitude of 7,296 feet, so let's just say we started the hike really slow.

Us, and the snake. But we were fine. 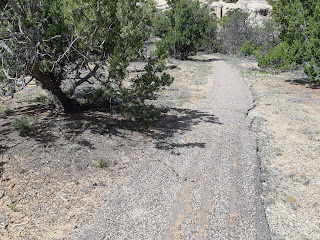 It's an utterly gorgeous and not too difficult trek up to the top, and we only had to use the defibrillator a few times each. 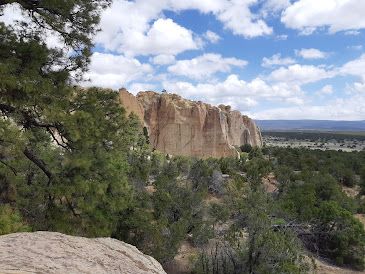 But the reward for the hike, in unbelievable winds that knocked us off our feet more than once, was seeing the stunning ruins of the 875 room Ancestral Puebloan village. 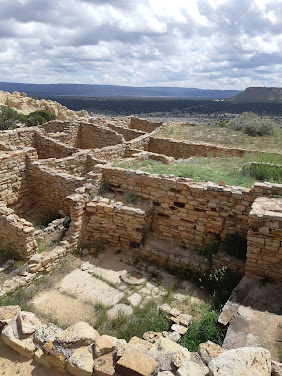 I must confess, the hike down was a wee bit easier on the lungs and legs, but even that part of the trek left us breathless.

We even encountered a class of elementary school kids who took waving to a whole new level. 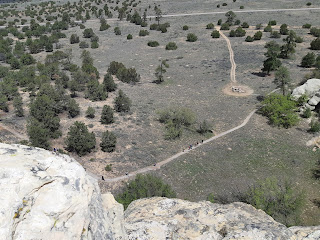 It was a fabulous day, and utterly humbling to go back almost 800 years in time to visit the home of people for whom history has very little record.

It amazed me to be near someone's home, built by hand, and to know they'd have seen the same view we saw when we climbed up to the footstep of heaven. 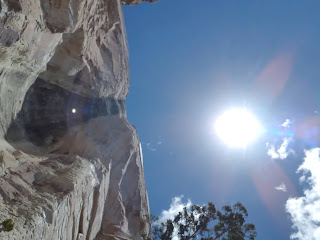