The Bible in America

I’ve lost count of how many Bibles we have in my household. Between my husband, college-aged son, and I, we must have over twenty copies of God’s Word in various forms and translations. I don’t say this lightly, because I know there are many places in the world today where the Bible is banned and people risk their lives to smuggle in and distribute God’s Word to hungry Christians, places where owning a copy of the Good Book could mean imprisonment or death. So, in that light, I feel very blessed to live in a time and place where I’ve been able to so easily purchase copies without ever fearing for my life or freedom—and I pray for those around the world who don’t have such free access to the greatest love letter of all time.

But have you stopped to consider that once upon a time in America, Bibles weren’t all that freely available? In fact, there was a time in our nation’s history where it was illegal to print the Bible in the English language on our shores. Yes, you read that correctly. I said illegal. During the Colonial period, it was against the law for anyone other than the Royal Printer to produce copies of the Holy Scriptures in English. Dating back to 1589, all copies of the Bible had to come from the printing press of Christopher Barker or, later, his son, Richard. For about forty years, these two were the only ones who could print an English-language Bible in all of Britain or her colonies. In 1629, Oxford and Cambridge Universities were given royal licenses to print the Word, and in 1633, a printer in Ireland was added to that very short list of authorized providers of English-language Bibles.

As Christians flocked to North America in search of religious freedom, they had to bring copies of the Holy Scriptures with them—printed by one of these approved sources—or they would have to request for one to be shipped “across the pond”. There was no running down to Olde Walmarte and picking up a cheap New Testament or perusing the Bible section at Ye Corner Bookshoppe to peruse the latest version in the “common man’s language.” There was one version—the King James Authorized Version—and it came from one of four sources, all far outside the colonies.

So imagine what happened when those colonies declared their independence from England. The access to the supply of God’s Word was suddenly cut off. And no one was printing English-language versions here in the new, fledgling country because it had been illegal to do so up to that point. This threw a wrench into the work of not only churches and the clergy being able to study God’s Word, but also courts of law who turned to the Bible for guidance in their judgments…and even schools, who used the Bible to teach their students on various subject matters. This was a crisis no one expected. By 1777, three members of the clergy in Pennsylvania realized that Bibles were growing scarce in this new country, and they petitioned the Continental Congress to do something about it.

A committee was formed, the issue was discussed, and a stopgap measure of importing 20,000 copies of the Bible from other countries was thrown out. Problem solved, right? Not so fast. On the same day this measure was discussed, George Washington lost the Battle of Brandywine and the British came marching southward from Canada. Fearing for their safety, the Continental Congress vacated Philadelphia before ever voting on the solution to the Bible shortage. They eventually landed in York, Pennsylvania, even as General William Howe captured and occupied the new nation’s capital of Philadelphia. So the matter of the Bibles was lost in the turmoil. 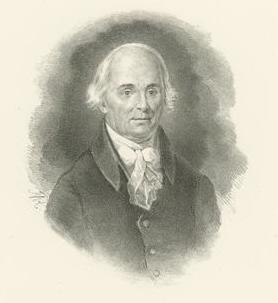 The topic wasn’t revisited for another three years. In 1780, a Pennsylvania delegate, James McLene, again brought a petition before the Congress, requesting they do something about the shortage of Bibles. Robert Aitken, a Scottish immigrant who printed the journals of the Continental Congress, informed that body that he was working on a translation of the Holy Scriptures that could be used for printing once he’d completed the task. He finished it in September of 1872—a full five years after the dilemma of the Bible shortage was first brought before the Continental Congress.

At the Congress’s request, the two chaplains of the Congress reviewed the work of Mr. Aitken and found it to be a sound translation. So on September 12, 1782, the Continental Congress approved the printing of this very first English-translation Bible in America—the only one that has ever received congressional approval in the history of this nation. It became known as “The Bible of the Revolution” or the Aitken Bible. 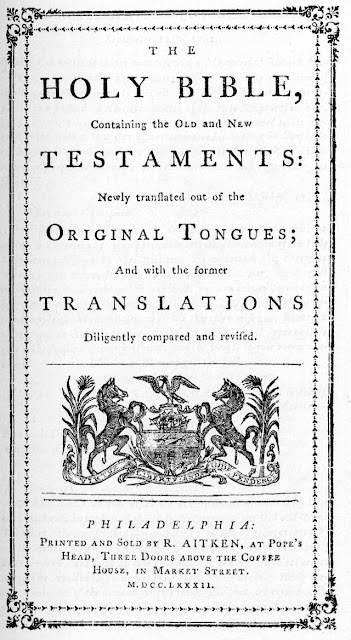 Few copies of this Bible remain today. In the 1940s, it was found that less than 30 copies existed in museums and around 20 were held in private collections around the world. Should you wish to see an original Bible of the Revolution, one is on display in the Museum of the Bible in Washington D.C.

It’s Your Turn: Do you own more than one copy of the Bible? Do you have a favorite translation, and if so, what is it? Have you ever been to a Bible museum, and where? 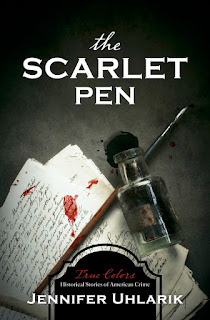 Step into True Colors — a series of Historical Stories of Romance and True American Crime
Enjoy a tale of true but forgotten history of an 19th Century serial killer whose silver-tongued ways almost trap a young woman into a nightmarish marriage. In 1876, Emma Draycott is charmed into a quick engagement with childhood friend Stephen Dee Richards after reconnecting with him at a church event in Mount Pleasant, Ohio. But within the week, Stephen leaves to “make his fame and fortune.” The heartbroken Emma gives him a special pen to write to her, and he does with tales of grand adventures. Secret Service agent Clay Timmons arrives in Mount Pleasant to track purchases made with fake currency. Every trail leads back to Stephen—and therefore, Emma. Can he convince the naïve woman she is engaged to a charlatan who is being linked a string of deaths in Nebraska?