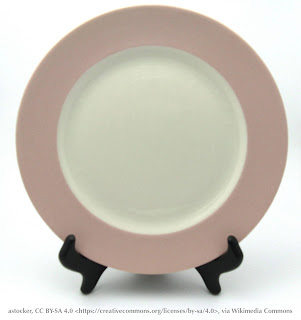 Have you ever looked down at your plate and wondered from whence it came?

This simple invention is one of the best. We have dinner plates, bread plates, butter plates, and dessert plates.

People didn’t always eat off of such vessels. So when did this practice start? What were they made of? What did the first plates look like?

The earliest plates were those made by nature; a large leaf, a shell, a hunk of wood, most anything which could hold food. These early plates were communal dishes everyone ate from.

Early individual plates were known as trenchers and were made of two-three inch slices of bread that had been set out to dry for four days or so. The hardened bread made out of coarse flour would be piled with the food offerings for that meal and people ate it with their hands. The “plate” (hunk of bread) wasn’t eaten, but rather it was given to the dogs or the poor. The juices and such that had soaked into the bread had actually turned it into a semi-nourishing and filling meal. 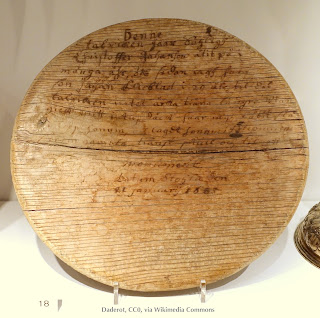 These trenchers worked well until the invention of the fork near the end of the Middle Ages (mid-1400s-ish). As people stabbed at their food with this new utensil, the dry bread got punctured and the juices seeped through too quickly. This was solved by putting the bread on a wooden base.

Eventually the bread trencher was discarded altogether, leaving the diner to eat off the wooden base. An indentation was carved in the wood to contain juices from the food. These wooden trenchers were sold in sets of twelve and painted with flower designs. 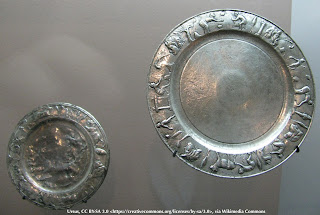 The wealthy didn’t like eating off of wood, so more expensive materials were used like silver, gold, and pewter. Dishes and flatware made of these precious metals were a sort of savings account. During hard times they could be sold or melted down. Even kings melted down their plates when they needed to raise funds in a hurry finance wars.

The trouble with pewter was it contained lead back in the day. With particularly acidic foods like tomatoes, the lead would leach out giving the diner lead poisoning. For a long time, people believed it was the tomatoes which were poisonous.

The poorer people eating off their wooden trenchers weren’t any better off. Wood can harbor bacteria on the best of days, and the custom was to not even wash them from one meal to the next. Between the bacteria from unhygienic practices and worms from the wood, people developed mouth sores. 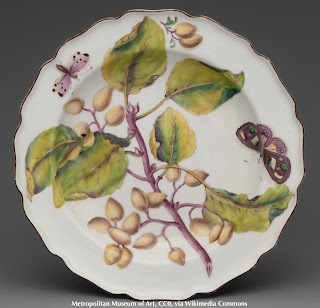 Eventually, Europeans desired to set their tables with delicate porcelain china. Soon decorated china became coveted across Europe. By the 1850s, middle class people could afford china. For a bride in the 1860s, choosing a china pattern was a rite of passage. 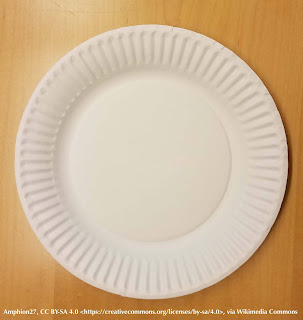 Today, in addition to most of the previous materials, we have plates made out of clay, glass, plastic, and paper. Speaking of paper plates, in the early 1900s, Martin Keyes noticed workmen eating off of pieces of veneer, which gave him the idea to mold paper pulp into pie-plate shapes. He patented his idea and opened a small factory in 1904. With the 1906 earthquake in San Francisco, the market for disposable plates exploded. The company continues to make disposable plates which include the Chinet brand that so many of us have used.