The evolution of eye glasses

As in previous posts, I’ll be sharing something else from my husband’s antique collection. There are three pair of eyeglasses stored in an antique glass bookcase. Each has a history.

First, I’d like to share a bit of the history of eyeglasses. An article in Wikipedia mentioned Emperor Nero used an emerald as a visual aid. An ancient book, Ptolmy’s Optic, circa 1012, describes the use of convex lenses to magnify images. This was at the same time the reading stone became popular.

Throughout the 11th and 12th centuries, various people experimented with lenses used for distance reading. Around the second half of the 13th century, the first eyeglasses were developed.

Dominican friar Giordana Pisa (c. 1255-1311) mentioned glasses in his writings, “It is not yet twenty years since there was found the art of making eyeglasses, which make for good vision…And it is so short a time that this new art, never before extant, was discovered…I saw the one who first discovered and practiced it and I talked to him.” 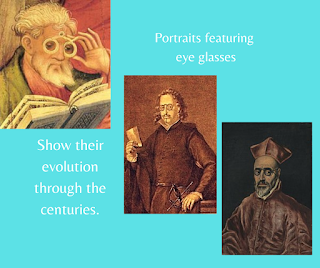 Without doing extensive research, we can trace the use of eyewear through the ages in various portraits. The subjects either wearing glasses or holding them. These early glasses corrected only farsightedness and presbyopia (poor eyesight due to aging).

By the 1600s lenses were being developed for nearsightedness. Benjamin Franklin is credited with creating the first bifocals. And in 1825, British astronomer George Airy designed lenses for correcting astigmatism.

The first frames for eyeglasses were very primitive. The rivet spectacles were two magnifying glasses riveted together by the handles so that they could grip the nose. As eyeglasses became more available, users either held them in place with their hand or by exerting pressure on the nose, pince-nez. 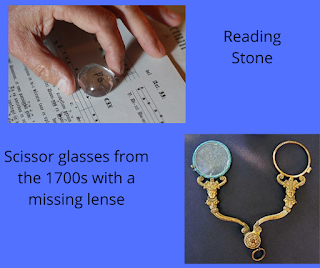 Another way to secure glasses was with a ribbon passed over the wearer's head and secured with a hat.

In the 1700s a variety of glasses had attached handles such as the scissors. These could be folded and carried in your pocket.

Eyeglasses until the mid- 20th century were referred to as medical devices. Theodore Roosevelt often wore glasses in photographs. Over time, the stigma of eyeglasses being unattractive changed as various celebrities wore them, such as Buddy Holly, John Lennon and John Denver. Character actors wore glasses to represent intelligence and superheros such as Superman and Wonder Woman used them as their alter-ego disguise.

Marketing and redefining glasses as eye wear transformed them into a fashion statement.

Now let’s take a look at the three pairs of glasses from my husband’s ancestors. The pince- nez glasses were worn by one of my husband’s great-grandmothers, circa 1900.

The second pair belonged to his great-great-aunt. Note they are six-sided and bifocals. The earpieces are simple wires that are bent to wrap around the ears to fit comfortably on the face. The glasses’ case was stamped “the Haley’s eye infirmary of Centralia, Illinois.” I find calling the eye doctor’s office an infirmary less appealing than the optometrist. 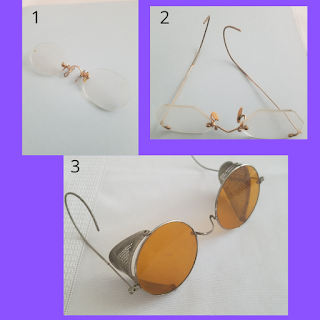 The third pair are safety glasses. My husband’s great aunts called them threshing glasses. The tinted lenses protect from bright sunlight while the screening on the sides kept debris out of their wearer’s eyes. The first patent for safety glasses was in 1880, filed by African-American Powell Johnson. He designed them for firefighters and those who worked with blast furnaces. There is no picture of the design available. But they were tinted like the safety glasses pictured to protect the eyes from the bright light.

Families kept old glasses and passed them on to other family member who might need them. Today, eye glass wearers donate their old glasses to the Lion’s Club or other organizations who send them to third world countries to be used by those unable to afford to purchase glasses.

Do any of you save old eyeglasses? Do you have any antique glasses at your house? 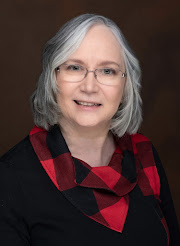 Cindy Ervin Huff is a multi-published writer. She has been featured in many periodicals over the last thirty years. Her historical romance Secrets & Charades won the Editor Choice, Maxwell Award and Serious Writer Medal. Her contemporary romance, New Duet placed second in the 2019 Serious Writer Awards and a finalist in the 2019 Selah Awards. Cindy is a member of ACFW, Mentor for Word Weavers. founding member of the Aurora, Illinois, chapter of Word Weavers and Christian Writers’ Guild alumni. She loves to encourage new writers on their journey. Cindy and her husband make their home in Aurora, Illinois. 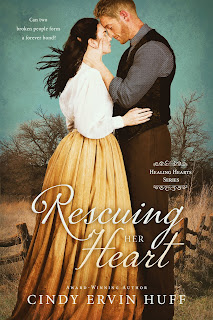 As her husband's evil deeds and abuse haunt a mail-order bride from the grave, can she learn to trust again and open her heart to true love?

On visitation rounds as a lay preacher, the last thing rancher Jed Holt expects is to be shot at from the barn next to a burned-down homestead. But the soot-covered woman hiding inside needs protecting, and Jed is the man to do it whether she likes it or not.

Jed has his own nightmares from a POW camp and understands Delilah better than she knows. Can two broken people form a forever bond?  Preorder paperback  Releases July 6, 2021.

Posted by Jubileewriter at 8:00 AM