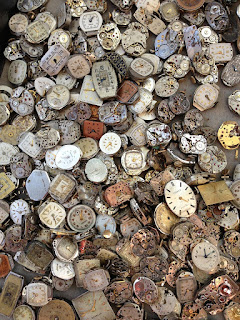 Did you know the first wristwatch was actually made by Abraham-Louis Breguet for the Queen of Naples in 1810. More than 50 years later, in 1868, Countess Koscowicz of Hungary had a bracelet watch made by the Swiss watch manufacturer, Patek Philippe? Amazing.

I wear a wristwatch, and we can choose from a simple, high-tech, or expensive watch from many designers. I choose the Citizen where I don't need a battery, and it's powered by light. It's not that expensive, and I can depend on it.

1571 - Queen Elizabeth I receives a working "wristwatch" from her life-long friend and possible beau, Robert Dudley. 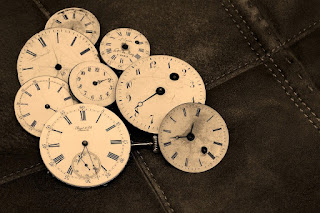 In the later 1500's, balance and the spiral spring were created, which made the construction of precise watches possible. The coil spring replaced the long pendulum that was used in the past and thus created the foundations for a small wristwatches.

In 1673 Christiaan Huygens created a watch with spiral spring and balance, which was already relatively small and portable.

1680 – As watches became more accurate (losing about 10 minutes per day), this allowed a minute hand to be added to the dial.

1780 – Abraham Louis Perrelet invents the first self-winding movement, utilizing the oscillating motion of a weight inside the watch.

1782 - Marie A1868 – Patek Philippe manufactures the first wrist watch (wound with a key). Patek Philippe were responsible for developing the perpetual calendar, the split-second hand, the chronograph and having minute repeaters in watches. These watches were a form of jewelry for women.

1880 – Kaiser Wilhelm I (of Germany) ordered 2000 wristwatches be made for German naval officers.

1786 - Bregue begins to manufacture his "perpetuelles" in more than single digit numbers.

And now there are many watches for sale in stores, on line, and at festivals and fairs! I hope you've enjoyed learning about wristwatches today. Thank you for joining me! 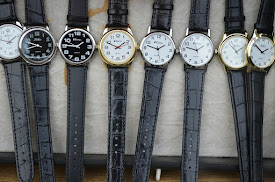 DO YOU WEAR A WRISTWATCH? 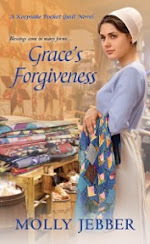 
Posted by mollyjebber@yahoo.com at 12:30 AM