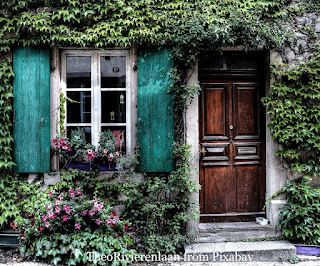 Do you think much about doors? What is a door? A door is many things…
...an entry
…an exit
…welcoming
…protection
…a transition point
…a portal
…a connection between two worlds

We couldn’t imagine our personal dwelling place without a door. From whence did they come?

Early doors were made out of whatever was available locally, generally wood or stone. Later, some doors were made-of or overlaid with bronze and other materials.

Ancient stone doors had pivot posts at the top and bottom which fit into sockets for them to swing open and closed. My back hurts just thinking about opening that heavy door.

In the 1st century AD, Greek scholar Heron of Alexandria created the first recorded automatic door. The Chinese developed the first foot-sensor-activated door around 604-618 AD for Emperor Yang of Sui for his royal library. And here I thought automatic doors were a relatively new invention.

During medieval times of the 12th and 13th centuries, the symbol on a door was significant. It could denote prestige, status, and wealth. Doors and the architecture surrounding them became more and more elaborate. 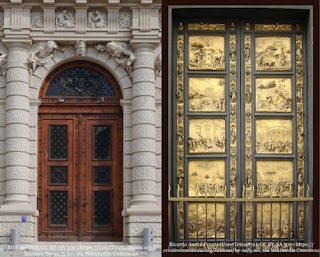 Once at a person’s door, how does one announce oneself? Door knockers were a favorite and, like doors, could tell a visitor a little something about who dwelt beyond the barrier. For instance, a lion door knocker indicated that a Christian resided within. 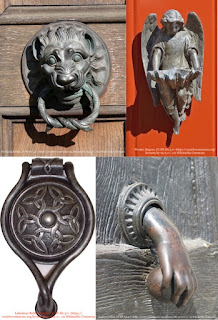 Customs changed, both over the centuries and depending on your station. As they say, when in Rome . . . In Ancient Rome, knocking was done with the foot. In the middle ages, one would knock with a single hand, or some preferred a more subtle approach and simply coughed to announce their arrival. In 16th century Cologne, important people brought along a servant to knock for them. And in 18th century Versailles, knocking was out and scratching with the fingernails was in. That’s just creepy. 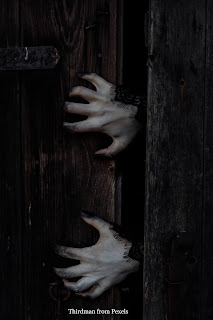 An indispensable part of the door is the knob. History is a little unclear about when doorknobs came on the scene, but they weren’t as we have today. Knobs that have a fitted socket and a mechanism which allows them to turn didn’t pop up until the late 1880s. This surprised me. I thought turning knobs would have been around much longer. 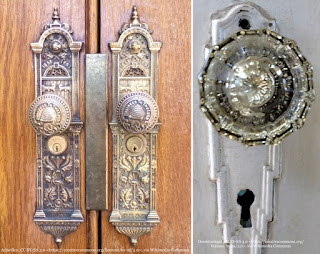 For some, a simple door would never do. The more unique, ornate, and bigger, the better. For three years, William K. and Alva Vanderbilt were working on a secret project that had many curious. The eight-foot-high fence protecting their secret came down on August 19, 1892 to welcome society’s elite to their Marble House in Newport, Rhode Island. The most impressive marvel of engineering was the pair of sixteen-foot-high and twenty-five-feet-wide steel and glass doors. Each weighed more than a ton! The knobs on such doors must have been equally impressive. They weren’t, and they were. They weren’t impressive because there were no knobs. At all. The impressive part was that footmen in maroon uniforms stood behind each door to open and close them so the wealthy wouldn’t have to exert themselves. 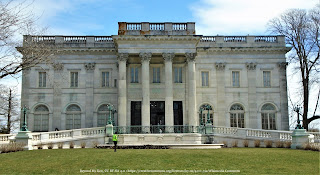 Though I’m all for people opening and holding doors for others, I prefer doors I can operate myself if I so choose.

Without doors, architecture would be little more than a box with no way in.

Much of this information came from an awesome book titled The Elements of a Home: Curious Histories Behind Everyday Household Objects, from Pillows to Forks by Amy Azzarito

Will Geneviève open her heart to a love she never imagined? Her sole purpose in coming to Kamola is to stop her brother from digging up the past. When a fancy French lady steps off the train and into Deputy Montana’s arms, his modest existence might not be enough anymore. Mystery surrounds Aunt Henny, aunt to all but related to no one. A nemesis from her past arrives, and she must decide to flee again or risk going to jail. When secrets come out, will the lives of Geneviève, Montana, and Aunt Henny ever be the same?

MARY DAVIS s a bestselling, award-winning novelist of over two dozen titles in both historical and contemporary themes. Her 2018 titles include; "Holly and Ivy" in A Bouquet of Brides Collection, Courting Her Amish Heart, The Widow’s Plight, Courting Her Secret Heart , “Zola’s Cross-Country Adventure” in The MISSAdventure Brides Collection , and Courting Her Prodigal Heart . 2019 titles include The Daughter's Predicament and "Bygones" in Thimbles and Threads. She is a member of ACFW and active in critique groups.
Mary lives in the Pacific Northwest with her husband of over thirty-five years and her geriatric Norwegian Forest cat. She has three adult children and three incredibly adorable grandchildren. Find her online at: