Today is our sixth visit to a European canal city, located in Stockholm, Sweden. If you’d like to explore Annecy, France in last month’s post click: https://www.hhhistory.com/2021/05/canal-city-annecy-france.html.
Located on the Scandinavian Peninsula of northern Europe between Norway and Finland, Sweden has a total area of about 173,732 square miles (slightly larger than the state of California. The country lies just south of the 60th parallel, and as a result, experiences a wide variation of the length of its days. During the height of summer, Sweden sees more than eighteen hours of daylight versus only six hours in late December. With an average of over 1800 hours of sunshine, Stockholm receives more sunshine than Paris, London, and several other major European cities.
Stockholm is the capital of Sweden, stretching across fourteen islands where Lake Mälaren flows into the Baltic Sea. Nearly sixty bridges cross the waterways in this “Venice of the North.” The 37-mile- long island chain of the Stockholm archipelago lies in a north-to-south direction of the east coast of the city.
The area has been settled since around the 6th millennium BC. Evidence suggests that when the

temperatures dropped during the Ice Age the inhabitants moved south, then migrated back several thousand years later after the grounds thawed and the climate became tolerable. Vikings built the city in approximately 1000 AD after creating trade routes.
By 1252, the city was officially known as Stockholm, the first part of the word stock meaning "log" in Swedish, although some scholars feel the word may be connected to an old German word meaning fortification. Holm means islet. At this time the mines were an important site in the iron trade. According to the Eric Chronicles, the oldest surviving Swedish chronicles written by an unknown author(s), Stockholm was founded by Birger Jarl to protect the country from sea invasions.
From 1610 to 1680, Stockholm’s population multiplied sixfold, and the city became the official capital of the empire in 1634. Thanks to a set of trading rules, Stockholm held a monopoly over trade between foreign merchants and other Swedish and Scandinavian territories. The Tre Kronor castle, used by King Gustav Vasa after he freed Sweden from the Kalmar Union, burned in 1697 and was replaced by the Stockholm Palace – construction of which did not finish until 1760! 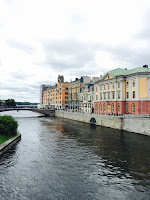 Throughout Sweden’s history, walls were created in Stockholm to defend the city from attacks, but in 1625 the Stora Vådelden (“large wildfire”) destroyed the southwestern section of Stadsholmen, an island in the center of the city. This led to the beginning of the demolition of the walls. Thirty-six percent of the population died in a plague during 1710, followed by the Great Northern War that halted economic growth. Fortunately, new industries emerged, and several scientific institutions were established during the second half of the 19th century bringing an influx of people.
Today, Stockholm is one of the fastest-growing regions in Europe, with the population expected to exceed 1.5 million by 2024. Follow the link to take a virtual tour of the Royal Canal: https://www.youtube.com/watch?v=oEz6jLVYz-o.
____________________

Linda Shenton Matchett writes about ordinary people who did extraordinary things in days gone by. A volunteer docent and archivist for the Wright Museum of WWII, Linda is currently working with the curator to create her very first exhibit, Shaped by Conflict. She is a native of Baltimore, Maryland and was born a stone’s throw from Fort McHenry. Linda has lived in historic places all her life, and is now located in central New Hampshire where her favorite activities include exploring historic sites and immersing herself in the imaginary worlds created by other authors. Learn more about Linda and her books at http://LindaShentonMatchett.com
Gold Rush Bride Hannah:

A brand-new widow, she’s doesn’t need another man in her life. He’s not looking for a wife. But when danger thrusts them together, will they change their minds...and hearts?
Hannah Lauman’s husband has been murdered, but rather than grief, she feels...relief. She decides to remain in Georgia to work their gold claim, but a series of incidents makes it clear someone wants her gone...dead or alive. Is a chance at being a woman of means and independence worth risking her life?
Jess Vogel never breaks a promise, so when he receives a letter from a former platoon mate about being in danger, he drops everything to help his old friend. Unfortunately, he arrives just in time for the funeral. Can he convince the man’s widow he’s there for her protection not for her money?
Gold Rush Bride: Hannah is the first book in the exciting new series Gold Rush Brides. Steeped in romance, intrigue, and history, the story will keep you turning pages long into the night.
Purchase Link: https://amzn.to/3omveSW
Posted by Linda Matchett at 12:30 AM