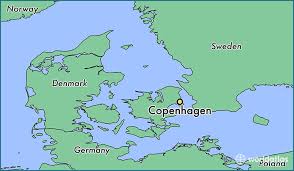 I hope you’ve enjoyed our virtual visits to the beautiful and historical canal cities of Europe and Scandinavia. If you missed last month’s trip to Stockholm, click here. Today, we’re going to travel nearly seven hundred miles south of Stockholm and cross the ocean onto Denmark’s coastal islands of Zealand and Amager to the city of Copenhagen.
Home to an 18th century rococo district, the royal family’s Amalieborg Palace, Christiansborg Palace, and the Renaissance-era Rosenborg Castle, Copenhagen was originally a Viking fishing village established in the 10th century because of its natural harbor and excellent herring stocks. The original designation in Old Norse (from which the Danish language descends) was Kaupmannahǫfn and means merchants’ harbor.
As the town became more successful, it was regularly 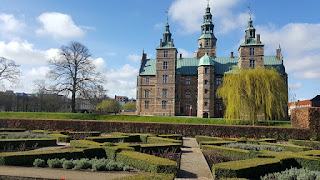 attacked by the Hanseatic League, a commercial and defensive confederation of merchant guilds and market towns in Northwestern and Central Europe. In 1368, Copenhagen was invaded during the Danish-Hanseatic War. Nearly three decades later, the Kalmar Union was established between Denmark, Norway, and Sweden in 1397, which joined the three kingdoms under a single monarch. In 1416, the city became the capital of Denmark (and de facto capital of the Union) after Eric of Pomerania moved his seat to Copenhagen Castle.
During Christian IV’s sixty-year reign from 1588 to 1648, Copenhagen grew dramatically. In 1670, seeing that the limited dockside space in the main harbor was hampering trade ships from loading and unloading, Christian IV’s grandson, King Christian V, ordered a new canal to be dug. Needless to say, there was no heavy equipment or tools for the job, so the digging was done by Swedish prisoners of war captured during the Dano-Swedish War of 1658. A gateway from the old inner city to the sea, Nyhavn, as it was named, means new harbor and is pronounced noo-hown. The canal served as a working maritime port for over three hundred years. 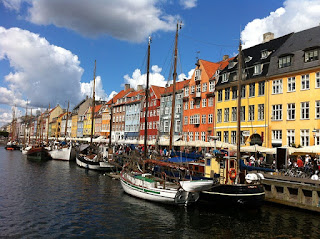 One website described the canal as “unequivocally pretty, its higgledy piggledy houses hugging each other tightly in a spectrum of chalky hues, from blush pink through jade greens and inky blue.” Legend has it that in the early days, city fathers and locals reserved one side of the canal for the less-reputable businesses and the other for respectable people and trade. Interestingly, even today, the southern side filled with lavish mansions is called the Shady Side, whereas the northern side that features colorful bars and restaurants is referred to as the Sunny Side.
Birthplace and home to royalty, celebrities, and other famous individuals, Copenhagen’s most well-known resident is possibly Hans Christian Andersen who lived in three of the Nyhavn houses numbers 20, 67, and 18, the last of which currently houses an Andersen-themed souvenir shop.
________________________

Linda Shenton Matchett writes about ordinary people who did extraordinary things in days gone by. A volunteer docent and archivist for the Wright Museum of WWII, Linda is currently working with the curator to create her very first exhibit, Shaped by Conflict. She is a native of Baltimore, Maryland and was born a stone’s throw from Fort McHenry. Linda has lived in historic places all her life, and is now located in central New Hampshire where her favorite activities include exploring historic sites and immersing herself in the imaginary worlds created by other authors. Learn more about Linda and her books at http://www.LindaShentonMatchett.com.
Gold Rush Bride Caroline 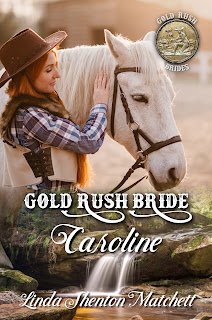 She thinks he's high-handed and out for her gold. He thinks she's difficult and money-hungry. Will they discover that love is the true treasure?
Scarred in a childhood accident, Caroline Vogel has yet to find a man willing to marry her, so she heads to the Pike’s Peak gold fields to pan enough ore to become a woman of means. When she and the handsome assistant trail boss hit it off, she begins to hope her future may not be spent alone. Then she catches wind of dark secrets from the man’s past, and she’s not sure what or who to believe.
Orphaned as a teenager, Oliver Llewellyn stole to survive, then used his skills for the army during the war. Nowadays, he applies his knowledge to catch dangerous thieves for the Pinkerton Agency, so guarding a young woman during a wagon train journey should be easy. But he didn’t count on the fact she’d angered a man bent on revenge. He also didn’t count on losing his heart.
Gold Rush Bride Caroline is part of the exciting multi-author Gold Rush Brides series set in 19th century America.
Purchase Link: https://amzn.to/3wKeZ5e
Posted by Linda Matchett at 12:30 AM