Last month, I talked about the history of Alcatraz Island and the famous prison located there. This month I wanted to talk about some of the famous escape attempts from the island prison deemed inescapable. During the twenty-nine years the prison belonged to the Department of Corrections, there were fourteen documented escape attempts. Many of those ended in the death of the inmate and a few included the death of guards. These men were desperate to be away from this prison and willing to risk all for freedom.

Theodore Cole and Ralph Roe both had a history of violent crimes and a history of escapes from other prisons. They were both incarcerated at the state prison in McAlester, Oklahoma, where more difficult prisoners were sent. Cole and Roe were acquainted in McAlester and were transported to Alcatraz together. They ended up with similar numbers at Alcatraz, which put them in close proximity to one another.

The final piece that led to their escape had to do with their work. They worked in different jobs but often in the same shop. In the two years prior to their escape they studied everything from the guard’s routines to the layout of everything in and around the prison. 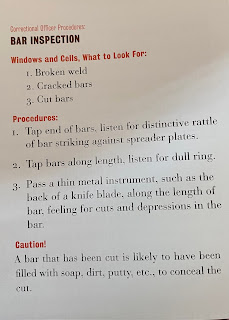 They used a stolen hacksaw blade to cut through the bars in the shop window. This took a long time, working bit by bit. The bars on the windows were checked often, but they noted which windows missed inspection the most. Then they u
sed grease or shoe polish to cover up where they’d been sawing. Only a very close inspection would have revealed their work.

On December 16th, a day of heavy fog, after eating lunch and returning to their shop, the men waited until the guard went to the other shop area. Then they removed the bars and broke out three windows. They slid through, a task that wasn’t easy for Roe who was larger than Cole. They used a wrench to break the padlock on the gate near the cliff. They slid down to the water and it is believed they used pieces of rubber from the shop to do so.

One of the inmates later wrote in his memoirs that he saw Roe struggling against the undertow, but then lost him in the fog. The Coast Guard and FBI were called in. Thus began a huge manhunt, but Cole and Roe were never found. There were numerous reports of them being sighted at various places but nothing was every proved. They are believed drowned and carried out to sea under the newly completed Golden Gate Bridge, but their bodies were never found.

In what was referred to as the cleverest escape, John Giles, made a unique attempt to get off Alcatraz island. Giles was sent to Alcatraz for an escape from a penitentiary in Salem, OR. While in prison in Salem, Giles wrote pulp stories for magazines and edited the prison magazine. When asked why he escaped when he was considered a model prisoner, he said, “I wrote fiction for magazine and the sources of my literary creation dimmed. I felt the need for new scenes and new faces….” He was free for seven months when he joined in a robbery of a mail train. Because of his former escape, he was sent to Alcatraz.

Giles was a quiet man who did his duties without complaint. Because of his frail

physique, he was assigned the task of sweeping the dock, unloading military laundry, and tending the flowers. Little did the officials know how intelligent and patient Giles could be. For ten years, Giles secreted bits of army uniforms, passes, furlough papers, maps, and other items he found in the dirty laundry. By the end of the ten years, he was able to put together a complete uniform including dog tags.

On July 31st, Giles reported as usual, but when the boat docked with soldiers and there was some confusion on the dock, he slipped away and removed his prison garb which had covered his stolen uniform. He then slipped on the boat and was there with a pen and pad of paper pretending to be a soldier.

The boat was almost back to its point of origin when Giles was reported missing. The sirens went off and the warden sent a message to the boat with the soldiers to check for the missing prisoner. The soldiers were lined up and Giles was found and returned to Alcatraz. He was put in solitary confinement and spent the next three years in D block, the worst place on Alcatraz.

He had stolen over forty items from the laundry. When interviewed by the FBI after his escape he refused to tell them anything. He didn’t want to hinder anyone else who might try to escape the same way. In an interview in 1967, when Giles was 77, he said, “…A man with a long time, he’s got only one thought—he wants to escape…You don’t want to die in prison…That’s all you think about….”

I wanted to do more escape stories because they are so fascinating, but this is getting too long. Maybe I will share a couple more stories next month. Let me know in the comments if you would like to hear more. Thank you for reading. As always, I love to hear from my readers.