And They Call the Thing Rodeo 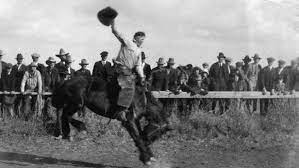 At least that’s how Garth Brooks describes it and I guess I’d have to agree. Do you enjoy rodeo? Ever wonder how it got started? As one of my favorite sports (next to my alma mater football) I’ve always been interested in its beginnings. Let’s delve into it and see what we can find out.

You may be surprised to learn that rodeo is a little more complex than boots, cowboy hats and fancy belt buckles. Rodeo is actually a unique of blend of cultures and traditions with its roots in Spanish origin. Modern day rodeo in our country dates back to the cattle industry of the American West, but it was greatly influenced by Spanish conquistadors in the 1700s.

Today’s rodeo developed many of its practices from Spanish ranchers and their Mexican ranch hands, or vaqueros. The word “rodeo” itself is derived from the Spanish word “rodear” meaning “roundup,” in reference to the roundup of cattle. As pioneers from the East interacted with the Spanish, Mexican, Californian, and Texan cowboys, they took on many of the vaqueros’ styles and traditions of ranch life.

The blending of Anglo and Spanish-Mexican cultures led to the birth of the American cowboy era in the 1800s. Breaking horses to ride and catching cattle for branding, doctoring, and sale required roping and riding skills on the frontier ranches. In the 1820s and ’30s ranch-versus-ranch contests began to spring up with cowboys and vaqueros testing their skills against each other.

It wasn’t until after the Civil War, however, that the cowboy era truly began, as ranchers from the Southwest organized cattle drives to deliver cattle to trains where they would be transported East. At the end of a drive, cowboys would hold informal competitions against each other to see which group had the best skills in riding and roping. These events soon became competitions on for public display at race tracks, fairgrounds, and festivals.

Some folks believe the first official rodeo was held in 1869 in Deer Trail, Colorado, when two groups of cowboys from neighboring ranches met to settle an argument over who was best at performing everyday cowboy tasks, including breaking wild horses, which is today’s saddle bronc riding event. Over the years, a culmination of skills and techniques from Spanish-speaking cowboys, vaqueros, and cowboys from the East combined to bring us today’s modern rodeo.

Many others claim to be the first rodeo in the U.S., including Cheyenne, Wyoming, in 1872; Winfield, Kansas, in 1882; and Pecos, Texas, in 1883. Still, these early contests were primarily simple displays of riding and roping skills and not the organized events now standard in today’s rodeo industry.

From the 1880s through the 1920s, frontier days, stampedes, and cowboy contests were the most popular names of what we now call the rodeo. Buffalo Bill Cody
and his Fourth of July Wild West show in North Platte, Nebraska, in 1882 was the first competition to offer prize money, with Prescott, Arizona, claiming to hold the “first formalized rodeo” on July 4, 1888. From there, Cheyenne Frontier Days in 1897, the Pendleton Round-Up in 1910, and the Calgary Stampede in 1912 followed as popular rodeo venues.

Initially, rodeo was a fairly nondiscriminatory sport, often including Hispanic, African American, Native American, and female contestants in an era when race and gender discrimination were commonplace. Women competed in many events at mixed-gender rodeos well into the 1930s. During this time, ladies often competed against men and won in a variety of rodeo events, including bronc riding and steer roping, as well as trick and fancy roping and riding.

One of the more well-known female competitors was Phoebe Ann Moses Butler. Butler grew up in a poor family in Ohio, where she took up hunting to provide for her family after her father died. From those marksman skills developed as a hunter, she earned the nickname “Little Sure Shot” and joined Buffalo Bill Cody’s Wild West Show as Annie Oakley in 1885.

2.The Rodeo Association of America was formed by rodeo organizers, and not the cowboys themselves, to standardize rules, establish a point system, monitor judges, and establish fair prize money. In large part because of McCarroll’s death, the RAA was organized as an all-male entity.

Women realized it would be up to them to get back into the mainstream of the sport and in 1948, the Girl’s Rodeo Association, now the Women’s Professional Rodeo Association (WPRA), was started by a group of Texas ranch women. The WPRA was highly successful in restoring cowgirl contests to PRCA rodeos. Barrel racing was the most popular WPRA contest, and it spread rapidly throughout the country. It is now the only women’s event standard at PRCA rodeos and often ranks second only to bull riding in popularity.

Rand Stafford isn't looking for true love. He'd ridden that trail leaving behind a shattered heart. He only needs a wife to help him care for his orphan nieces.
Fleeing her former employer, a newspaper advertisement reads like the perfect refuge to Carly Blair. Escaping the city to hide herself on a cattle ranch in Kansas is her best shot for freedom. But its sanctuary comes with a price—a husband. While marrying a man she doesn't know or love means sacrificing her dreams, it's better than being caught by the law. Or is it?