The History of Jigsaw Puzzles

John Spilsbury, a British engraver and mapmaker, is credited with inventing the first jigsaw puzzle in 1767 when he pasted a map onto wood and cut it into small pieces to be used as an educational toy. To this day, of course, “dissected maps” continue to be a wonderful way for children and adults to learn their geography.

In the early 1900’s, puzzles for adults emerged and became both a craze and an addiction. Pieces were cut exactly on the color lines, making them more challenging. And because the pieces did not interlock, an evening’s work could be wiped out with one false move or jostle. Nor did they have a guide picture on the box, so you may not be sure what the subject of your masterpiece looked like until the last pieces were in place. Those early wooden puzzles were expensive to make, too, which meant they were purchased only by high society folk at up to five dollars for a 500-piece puzzle (about one tenth of the monthly salary of an average worker).

Well-known game makers, the Parker Brothers, introduced puzzles that locked together and that each had unique “figure pieces” included, where an individual piece might be shaped like an animal or other recognizable object. This added so much appeal that in 1909, Parker Brothers stopped making games and devoted their factory to puzzle production that year.

The Great Depression of the 1930’s brought with it even more reasons to buy and sell jigsaw puzzles. By this time, the less expensive cardboard puzzles had emerged. They offered an affordable means of entertainment and escape from difficult times. It gave the struggling unemployed something at which to succeed. Folks could rent puzzles from libraries or drugstores for pennies a day. If purchased, they could be passed around a community until every family had assembled it. Puzzles were also given out free with the purchase of various products. The picture, of course, would be of the product itself, doubling as advertising for the company. 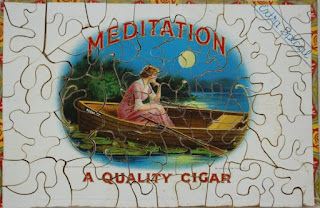 Other businesses jumped on the bandwagon and began producing weekly puzzles that people would rush out to buy every Wednesday, much like a newspaper, hoping to be the first to solve that week’s jigsaw. 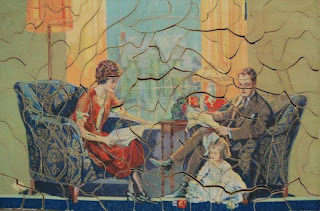 Once colored photography became common, jigsaw puzzles displayed more photos than artwork. With the advent of television, puzzles quickly declined in popularity. But even today, as jigsaws continue to grow in sophistication with unique challenges like 3D or double-sided, many remain devoted to the hobby.

For more, you might enjoy The Jigsaw Puzzle: Piecing Together a History by Anne D. Williams.

Ray Matthews dreamed of being an artist, but never of selling his work to a jigsaw puzzle maker—especially the portrait of his sweetheart, Sarah. When compelled to break his oath, Ray speaks a prophecy over the puzzle—that no one will be able to finish it before he and the love of his life are reunited. During the next 80 years, the puzzle passes through four different households. Though all are profoundly affected by Ray’s girl at the wishing well, none are aware of the connection between them—until one decision unleashes a peculiar chain of events.

Ironically, Terrie Todd is not a fan of jigsaw puzzles. But her love for

seemingly unrelated stories that all converge in the end—and an unfinished puzzle that sat on her dining table for a year—inspired her to introduce a jigsaw puzzle that is practically the main character in her upcoming split-time novel, The Last Piece. She’s also the award-winning author of The Silver Suitcase, Maggie’s War, Bleak Landing, and the recently released Rose Among Thornes. Terrie is represented by Mary DeMuth of Books & Such Literary Agency. She lives with her husband, Jon, in Portage la Prairie, Manitoba, Canada where they raised their three children and where her novels are set. They are grandparents to five boys.