Last month I wrote about some of the escape attempts from Alcatraz. Several of you wanted to hear more, so I’m doing two more of the most interesting attempted escapes from Alcatraz prison.

On April 13, 1943, four men made a daring escape from Alcatraz at 10:00 am--an escape that was well planned, but there are always unexpected hindrances. 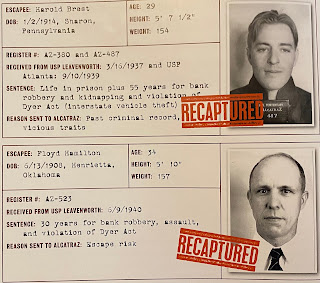 Hamilton came up with the plan which took the four men several months to prepare. Two of them stole pieces of guard uniforms from the laundry which they
concealed in fuel canisters and hid among other canisters. They planned to use these canisters as floatation devices in the bay. The others worked to saw through the bars of a window in the mat room, covering up their work with grease and paint. When they were ready they waited for a fog-enshrouded day.

On April 13th, the four prisoners brandished homemade knives and took one of the guards captive. They tied and gagged him. When his superior officer came looking for him, they did the same to him. Then the men stripped to their underwear and covered their bodies in grease to help protect against the chill of the water. They removed the bars and took some of the canisters but not enough since they were hard to get through the window. They slid thirty feet down a cliff face to the water.

The Captain worked his gag loose and yelled for help but the noise of the machinery was too loud. The first guard slid close and the captain was able to blow his whistle, which alerted the other guards. One of the tower guards saw the men going into the water and opened fire. Guards hurried to bring the prison boat around and found Brest hanging on to Boarman. Brest had been shot in the arm, but Boarman was shot in the head. Brest released Boarman, who sank below the waves. Hunter, injured in the slide to the water, hid in a cave and was found by the guards as they circled the island.

They thought Hamilton had been shot and drowned but he’d gotten away. He returned and hid in the same cave where they found Hunter. After dark, Hamilton tried to swim across the bay but the water was too cold. He stayed hidden in the cave for three days before he scaled the cliff face and climbed back in the prison through the very window they’d used for their escape. The same captain they had tied up revisited the scene and found a bruised and shivering Hamilton curled up next to the radiator.

Later on, Hamilton embraced Christianity. He ended up serving as vice-president for International Prison Ministry and in his later years he started an organization called ConAid. He was given a full pardon by Lyndon Johnson.

On June 11, 1962, one of the most brilliant escapes happened. Once again, four men worked together to make the plan and figure out the details.

Frank Morris (35) was known for his escape attempts at every prison where he’d been incarcerated. Brothers, John (32) and Clarence (31) Anglin, grew up swimming in the cold waters of Lake Michigan and were also known for their prison escapes, one of which included hiding John among loaves of bread in a truck. Allen West (35), hot tempered and arrogant, was again a noted prison escape artist. The four met in a federal prison in Atlanta before they were incarcerated at Alcatraz. 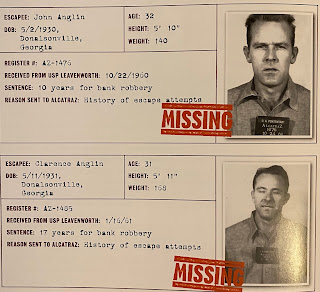 West discovered a chink in the Alcatraz armor almost by accident. The ventilator cap at the top of the cell house had not been cemented shut. The four men planned to enlarge the air vents in their cells and exit into a service corridor behind the cells. Then they would find a drain pipe to climb to the top, exit through the ventilator, slide down a pipe to the ground, and paddle to freedom on a cobbled together raft.

Once again, it took months of planning and gathering the extensive materials needed. They had to slowly chip away at the air vents in their cells, hiding the evidence, and being quiet to escape notice. Sometimes they played music to cover up the sounds of digging. Every night for four hours and through several months the four of them worked to dig their way out and prepare their escape supplies.

West finagled a job in the top tier of the building, cleaning and painting the space above the cells. Saying he wanted to prevent debris from getting in the cells, he convinced the guards to let him hang blankets around the workspace. The four men, secreted behind the blankets, furthered their plans. They fashioned a raft from some fifty rubber raincoats they’d stolen and using a design found in a popular mechanics magazine. They also made paddles and life preservers.

The prisoners were allowed to have musical instruments in their cells, so West ordered a concertina which they planned to use to inflate the raft. Finally, after seven months they had the materials they needed and had broken through the ventilator’s fastening. The escape route was complete.

During this time of preparation, the men stole materials to make dummy heads. They found flesh-colored paint, and stole hair clippings from the barber shop. In the dark and from outside the cell these heads were very convincing.

After lights out on June 11th, they deemed the time had come for the escape. They retrieved the heads and put them in their beds with the blankets make to look like a body. They collected everything they’d prepared and headed for the ventilator. West had a problem getting out of his cell. He had cemented a fake grill over the air vent and couldn’t get it out. By the time he reached the ventilator above, the others were gone.

On the morning of June 12th, the guards did their usual rounds. Prisoners were expected to be standing at their cell door but Morris was still asleep, the Anglins were also still sleeping. The guards entered the cell to rouse them and discovered the fake heads. They were very shocked when the prisoner’s heads rolled off the bed onto the floor.

The alarm went out and more than 500 FBI and soldiers descended on the island, searching the grounds and the waters in the area. Over the course of the next weeks they found several clues: a receipt with one of the prisoners names on it, black polyethylene with knots tied in it, a makeshift lifejacket covered in bloodstains, and planks lashed together with a rope. A month after the escape a Norwegian freighter spotted a body floating twenty miles from the Golden Gate bridge but didn’t report it for three months. The body is suspected to be one of the inmates but there was no proof.

Only West was recaptured since he hadn’t been able to escape with the others. He was questioned extensively and gave great detail about their plans and escape process. Morris and the Anglin brothers were never found. The manhunt lasted for years until in 1979 they were officially marked as missing and presumed drowned. By this time the prison had been closed for sixteen years.

This event shocked and terrified the country as people speculated what happened to the three inmates. Clint Eastwood played the role of Morris in, Escape from Alcatraz, a 1979 movie of this escape. The escape has also been featured on Mythbusters and  America’s Most Wanted. The truth of what really happened may never be known.

I am fascinated by the ingenuity of these men and their determination to toil for so long in an attempt at freedom. Braving the cold waters of the bay with the threat of being shot had to be terrifying. Yet they persisted. If you are interested in reading more, I highly recommend Alcatraz Escape Files. The accounts are very detailed but easy to read.

Nancy J Farrier is an award-winning author who lives in Southern Arizona in the Sonoran Desert. She loves the Southwest with its interesting historical past. When Nancy isn’t writing, she loves to read, do needlecraft, play with her cats, and spend time with her family. You can read more about Nancy and her books on her website: nancyjfarrier.com.
Posted by Nancy J Farrier at 4:00 AM