In 1942, two independent female flying organizations were created, the WFTD (Women’s Flying Training Detachment) by pilot Jacqueline Cochran and the WAFS (Women’s Auxiliary Ferry Squadron) by pilot Nancy Harkness Love. These two organizations combined August 5, 1943 to form the WASP (Women Airforce Service Pilots) led by Jackie Cochran.
More than 25,000 women applied to the WASP. Only 1,830 were accepted into the program, with 1,074 of these skilled female pilots completing the training with 560 hours of ground school and 210 hours of flight training. Many of these women came from wealthy backgrounds as they could afford the expensive instructions to earn their pilot’s license well before applying.
These patriotic brave ladies became the first women to fly American military aircraft, taking off from 126 airbases across the U.S. to relocate combat aircraft. They flew 80% of the ferrying missions. They flew just about every type of U.S. military aircraft used by the military during WWII. WASPs delivered over 12,000 aircraft and freed around 900 male pilots for combat duty. They flew over sixty million miles.
Though WASPs were stationed stateside away from the combat, thirty-eight died due to accidents in the line of duty, and one disappeared while on a ferrying mission. Her fate is still unknown. 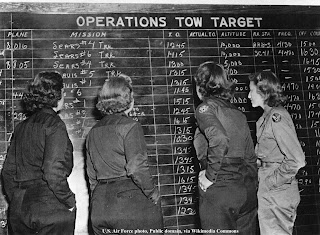 Besides ferrying airplanes from factories to bases where the male pilots were stationed for training and to be deployed, WASPs also tested aircraft, trained male pilots, were airplane mechanics, transported cargo, and towed targets for live anti-aircraft artillery practice.
Jackie Cochran insisted upon her female pilots having their own uniform. General Hap Arnold said, “They should be BLUE.” The Quartermaster Corps offered 40,000 yards of drab olive wool fabric. To which Cochran responded, “My girls will never wear that!” Instead of outright rejecting the material and risk not having WASP specific uniforms, Cochran along with the designer made up two uniform samples; one in the lackluster olive and the other in a ‘classy’ Santiago blue wool gabardine, which closely resembles the current Air Force Blue color. The green one worn by a Quartermaster Corps clerk and the blue one by a gorgeous French model were paraded in from of the two decision making generals. Surprisingly, they chose the blue one. LOL! Cochran was a smart cookie and knew how to get her way even if men made the decision.
Though the WASP worked for the Army, they were still civilians. They were paid less than the men who did the same job and didn't receive any benefits. They had to pay for their own travel and uniforms.

Fifinella was the WASP mascot. The logo was created by the Walt Disney Company. 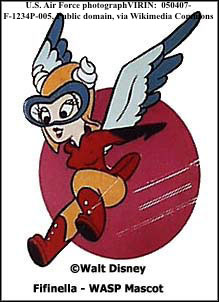 The WASP arrangement with the Army was terminated in December 20, 1944 when returning male pilots took over the ferrying duties. Finally in 1977, the WASP members were granted veteran status. 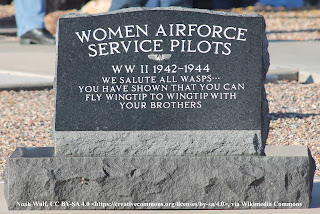 Though an individual WASP wouldn’t perform all these duties but specialize in one, I chose to have my WASP heroine in my upcoming WWII release Mrs. Witherspoon Goes to War do many of the jobs so I could spotlight several of the WASP assignments.

MARY DAVIS, bestselling, award-winning novelist, has over thirty titles in both historical and contemporary themes. Her latest release is THE DÉBUTANTE'S SECRET (Quilting Circle Book 4) THE DAMSEL’S INTENT (The Quilting Circle Book 3) is a Selah Award Winner. Some of her other recent titles include; The Widow’s Plight, The Daughter's Predicament, “Zola’s Cross-Country Adventure” in The MISSAdventure Brides Collection , Prodigal Daughters Amish series, "Holly and Ivy" in A Bouquet of Brides Collection, and "Bygones" in Thimbles and Threads. She's a member of ACFW and active in critique groups.
Mary lives in the Pacific Northwest with her husband of thirty-seven years and one cat. She has three adult children and three incredibly adorable grandchildren.