A Sailor and His Ditty Box 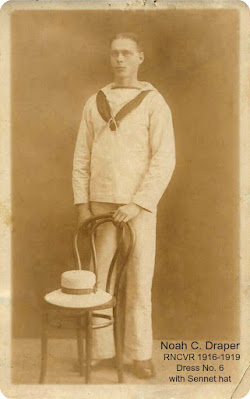 In honour of Remembrance Day on November 11th, I'm sharing the story of my husband's grandfather, Noah Clement Draper, a man who couldn't swim, but still joined WW1 as a sailor in the Royal Navy Canadian Volunteer Reserve.

Noah's story has been passed down in a series of letters he sent to his wife and family starting in November 1916 when he signed up, until March 1919 when he finally came home. Reading about his experience on ship gives a unique account of the Great War not often shown in images and film of those horrendous days.

A ditty box was included with Noah's kit. A ditty box is a lockable wooden container where a sailor kept his most treasured items like photographs, money, letters, writing instruments, etc. Anything that mattered to him during those long trips at sea were locked inside...his life in a box...and a lifeline to those he loved. Losing a ditty box was devastating. Although we don't know if Noah painted or embellished his ditty box as some others had done, we know what it held on the day it was stolen.

On Sept 9th, 1917 while serving aboard the HMS Bacchante, Noah wrote "Well I had a bit of hard luck on Friday. Had my ditty box stolen, and all my valuables my bible, watch and chain, pocket book (but no money) pen, a razor and all my photos and about 50 other things, oh yes my date book along with the rest. I do not expect to see any of it again, in all it would be worth $50."

Due to his letters being censored, Noah couldn't give his location, however back on March 28th, 1917, he had sent his mother this postcard from Rochester, England saying that he had no need for winter clothes at present. 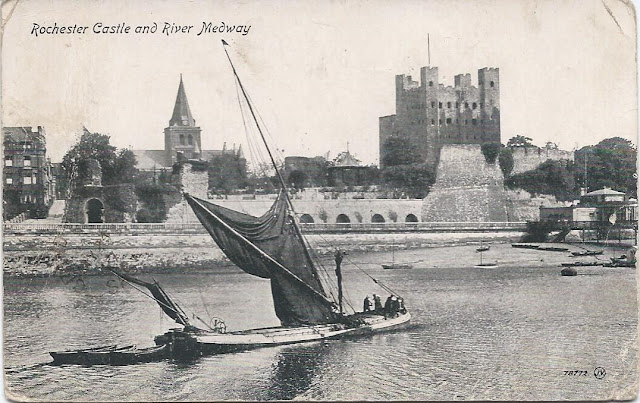 Noah was taken off strength at the Chatham Barracks, Rochester, and assigned to the HMS Bacchante on February 15, 1917. According to the Royal Navy Log Books of the World War 1 Era, the Bacchante served as the flagship of the 9th Cruiser Squadron based out of Sierra Leone, under the West Africa Command, from April 1917 until 1919. Indeed, he didn't need any winter clothes in the tropics.

Noah's next letter mentioning the ditty box is dated Sept 14, 1917. "Well Ethel my pen went with the watch ect. so am using a pencil but I guess it will do for a while..."

The date is ripped off his next letter (possibly due to censorship), but his location still shows the Bacchante, and since his service record shows he was in transit aboard the Monea from Oct 21st to Nov 6th, this letter must have been dated prior to Oct 20th when he wrote, "Well I put in a request to see the captain and expect to go up before him tomorrow to see if I can not get compensation for my ditty box and service contents which amounts to about 14 shilling or $3.50. Not much compared to the value, but I guess I will be lucky if I get that."

Nov 9th, 1917, Noah writes from the HMS Swiftsure that he arrived back in the old country (England) yesterday morning after spending 11 days on leave in Scotland. He wrote that he had had kit inspection that day and had to buy a pair of boots and a ditty box.

His next letter with mention of the ditty box is written on stationery from the Royal Sailors' Rest in Devonport, England where he is stationed at the HMS Vivid, Devonport Barracks. He wrote, "Well Ethel I got a chit from the Post office on the Swiftsure last Sunday to call for a parcel and went over and got my ditty box. It had been found on the stoker mess deck but of course it had been broken open and every thing taken that was any good to the thief who stole it. They took my watch and chain, my bible pen pocket book and a lot of other things, all my post cards and snapshots but left the big photos, a pipe bottle of ink and a ball of yarn, ha ha, but I had bought another box so now I have 2 to look after, but I was glad to get the photos back anyway. So you see that is something to be thankful for, eh."

Noah was stationed in Devonport from Dec 1st to 19th. His letters are filled with thoughts of what he lost in his ditty box as well as wishing he was home. He starts a lot of sentences with suppose...as in, suppose mother is doing this now, or suppose the kids are big now. His time at Devonport is a waiting game filled with menial tasks, drill, and guard duty.

In his Dec 18th letter, he wrote, "Say I had some silk handkerchiefs from Sierra Leone but guess they went in my ditty box. ha ha."

On Dec 20th, 1917, Noah was assigned to HMS Courageous. His December 29th, 1917 letter starts with, "Well Ethel I am on the good old boat..." He doesn't mention his ditty box again, but tells Ethel, "I wish I could describe the ship to you but ==== that is all I can tell you about her, but I do not think I will be seasick when we go to sea. Ha Ha."

Although it's difficult to tell from the images, the Bacchante was a 472 ft cruiser, while the Courageous was a 786 ft battlecruiser. Noah took several photographs while on the Courageous including those of its single aircraft.

Noah served on the Courageous until February 1919. He returned to Canada on March 25, 1919 where he was greeted by his family and finally had a chance to meet the son who had been born several months after his departure. We are thankful for the legacy of the letters, postcards, and photographs which Grandma Ethel saved over the years and which we share on the Author Memories blog.

We will remember those who served in the military conflicts in the name of Peace and Freedom, those who came home, and those who were lost and only remain in the minds, memories and memorabilia of those who will never forget. 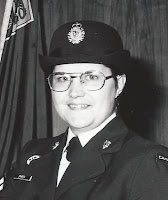 Anita Mae Draper served a 20-year term working on air bases in the communication trade of the Canadian Armed Forces before retiring to the open skies of the prairies. She uses her experience and love of history to pepper her stories of yesteryear's romance with realism as well as faith. Anita Mae Draper's published stories appear in Barbour Publishing, WhiteFire Publishing, and Guideposts Books. Readers can enrich their story experience with visual references by checking out Anita's Pinterest boards. All links available on her website at www.anitamaedraper.com
Posted by Anita Mae Draper at 2:30 AM