Mark Twain and a visit to his home in Hartford Conneticut 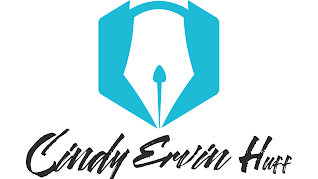 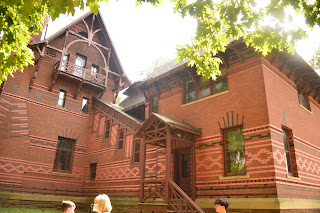 Mark Twain’s home in Hartford, Connecticut, was on our road trip tour back in June. My husband did an impression of Mark Twain in high school using the recordings of Hal Holbrook’s performances back in the day. Mark Twain State Bank even hired him in Missouri for a branch office grand opening. So fun!

Needless to say, the two of us have read much of what the man wrote. He is an interesting character. 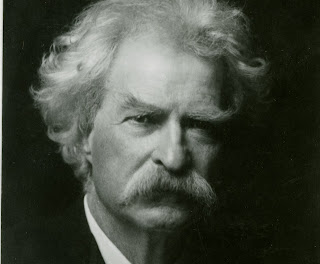 Samuel Langhorn Clemens was the sixth of seven children. He was born two months premature on November 30, 1835 in Florida, Missouri. He was a frail and sickly child until the age of seven. His father, John Marshall, was a self-educated lawyer and moved his family to Hannibal, Missouri, where he became the justice-of-the peace. When Samuel was 11, his father died of pneumonia at 49. At 12 in 1848, Samuel became a full-time apprentice at a newspaper. In 1851, he became a typesetter for a newspaper owned by his brother Orion. He wrote a handful of satirical articles for his brother’s paper. Pretty impressive for a poorly educated teen. In 1853, 17-year-old, restless Samuel traveled around visiting various places such as New York and Philadelphia working as a printer.

In 1857, he apprenticed as a steamboat pilot on the Mississippi River. He even got his younger brother Henry a job with him on the steamboat, Pennsylvania. That same year, the boiler exploded and among those who died was 19-year-old Henry. Despite this tragedy, Samuel went on to get his steamboat pilot’s license. He worked as a pilot until the start of the Civil War in 1861, when all commercial traffic on the Mississippi River was stopped. While a pilot, his friend Charles Langdon showed him a photograph of his sister Olivia. Samuel began corresponding with her. Her family was not impressed with him. They were from old money and until he made a success as a writer, they remained doubtful. Samuel and Olivia married in 1870

In 1861, 25- year-old Samuel joined the Marion Rangers, a pro-confederate militia. Clemens didn’t have any strong convictions about going to war, probably joining the militia out of loyalty to his Southern roots. After only two weeks, the poorly trained Marion Rangers disbanded when they heard a Union force lead by U.S. Grant was heading their way.

Samuel headed west to join Orion in Nevada territory. His attempt at silver mining proving unsuccessful, he took a job as a reporter with a newspaper in Virginia City, Nevada in 1862. There, for the first time, he tried the pen name Mark Twain ( a term used on steamboats to measure water levels. Mark Twain was a safe depth for the steamboat.) He had tried other pen names: W. Epaminondas Adratus Blab and Thomas Jefferson Snodgrass before resting on Mark Twain.

He traveled to San Francisco for a while, plying his trade as a reporter. Then joined friends at their mining cabin. While at a bar, he heard a man tell a story about a jumping frog contest. When he returned to San Francisco, he found a letter from a friend who wanted to include a story from Mark in a collection he was publishing. But by the time he’d finished Jim Smiley and the Jumping Frog, the friend’s book had been published. The publisher sent the story to the Saturday Press in New York. The story was so well-received it was reprinted across the US. Later the title was changed to The Celebrated Jumping Frog of Calaveras County.
He and Olivia had four children. His son Langston died as a toddler. Mark became quite wealthy and built the home we toured in Hartford, Connecticut. The home had been refurbished to resemble the original structure. We were not allowed to take interior pictures, but the tour guides were very knowledgeable. Many of his stories were written in his office there.

Mark was always looking for investments. But he often invested in the outlandish and neglected the sound ones. He turned down Alexander Graham Bell’s telephone idea. But invested heavily in an automatic typesetting machine that failed miserably. His debts piled up. He moved his family to Europe, where it was cheaper to live. He hoped the change of scenery would restore his wife’s health.

A popular speaker, Mark paid off his debts in a short time and regained his wealth. Their daughter Clara stayed behind in Connecticut, and to the heartbreak of the couple, she died of Scarlet Fever while they were in Europe. They sold the home, never to return to it.

The Clemens then lost another of their daughters, leaving only Jean surviving. Then his beloved Olivia passed in 1904 after 34 years of marriage. He passed away on April 21st, 1910. Mark Twain wrote “I came in, in 1835, on the tail of Haley’s Comet and it is coming again, and I expect to go out with it.” He died of a heart attack the day after it was visible in the sky in 1910.
He was very bitter toward God after he lost his wife, who was very religious. He wrote Letters from Earth. In his last will and testament, he requested it not be published until his last descendants died, fearing the content would cause his family grief. It was published in 1963. It was a satire on religion and man’s ideas of heaven. We have read it, and by the time debuted on the market, society was very accepting of his humorous interpretation of man’s ideas of religion and heaven.

For a man from humble beginnings, his many quotes have left a lasting mark on the world today.

Have you read any of Mark Twain’s books or short-stories?

My latest release, Angelina’s Resolve, is set in Kansas after the Civil War, and although Mark Twain doesn’t make a cameo appearance in my book, he would have enjoyed meeting Angelina. He was a rare breed at the time for his support of women’s suffrage.

Architect Angelina DuBois is determined to prove her worth in a male-dominated profession by building a town run by women, where everyone is equal, and temperance is in the by-laws. Contractor Edward Pritchard must guard his heart as he works with the beautiful, strong-willed yet naïve Angelina. He appreciates her ability as an architect, but she frustrates him at every turn with her leadership style. When the project is completed, will it open doors for more work or make him a laughingstock? Can two strong-will people appreciate their differences and embrace their attraction as they work to build the town?


Cindy Ervin Huff is an Award-winning author of Historical and Contemporary Romance. She loves infusing hope into her stories of broken people. She’s addicted to reading and chocolate. Her idea of a vacation is visiting historical sites and an ideal date with her hubby of almost fifty years would be an evening at the theater.

Visit her at www.cindyervinhuff.com and sign up for her newsletter.