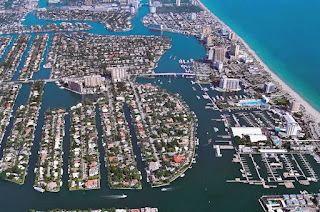 Have you been enjoying our virtual visits to the beautiful and historical canal cities of the world? If you missed last month’s trip to Gold Coast, Australia, click here (https://www.hhhistory.com/2021/09/canal-city-gold-coast-australia.html). Today, we’re going to fly over nine thousand miles across the Pacific Ocean to finish our tour of canal cities in Fort Lauderdale, Florida.
Although designated Venice of America because of its more than 300 miles of inland waterways dotted with gorgeous homes, massive yachts, and pristine landscaping, the city’s history goes back more than 4,000 years with the arrival of the first natives and later with the Tequesta Indians who inhabited the area for more than a thousand years.
Through a series of wars and treaties, the area changed control among Spain, England, the United States, and the Confederate States of America during the late 1700s and early 1800s. During the Seminole Wars, four different forts were built on the land and named for Major William Lauderdale. One of Andrew Jackson’s inner circle, Lauderdale played an integral role during the conflict before dying in 1837.
The fort was abandoned in 1842 after the end of the war, and the area would see very little population

growth until fifty years later when savvy businessman Frank Stranahan set up a ferry service across the New River and managed the mail route for the region. The arrival of the railroad three years later brought organized development, and the city was incorporated in 1911.
A land boom in the early 1920s brought a major influx of people, but the 1926 Miami Hurricane followed by the 1928 Okeechobee Hurricane created extensive damage, instilling the perception that Florida was not the paradise promoted by developers. The Great Depression further decimated the area.
As with the rest of the United States, Fort Lauderdale saw growth during WWII when the city became a major US Navy base and added a Coast Guard base in nearby Port Everglades. After the war ended, service members returned to the area, creating a population explosion that dwarfed the 1920s boom. 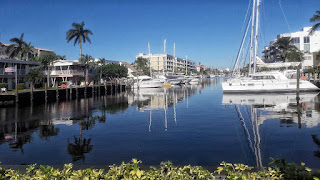 The city went through a major make-over in 1988, when the local government built the signature beachfront promenade. Upscale restaurants, boutiques, and hotels mingle with museums and cultural events. Numerous luxurious waterfront homes line New River, earning the sobriquet Millionaire’s Row. In addition, many residents live aboard their yachts in one of more than one hundred marinas, a far cry from the rustic fort for which the city is named.
_____________________

Linda Shenton Matchett writes about ordinary people who did extraordinary things in days gone by. A volunteer docent and archivist for the Wright Museum of WWII, Linda is a former trustee for her local public library. She is a native of Baltimore, Maryland and was born a stone’s throw from Fort McHenry. Linda has lived in historic places all her life, and is now located in central New Hampshire where her favorite activities include exploring historic sites and immersing herself in the imaginary worlds created by other authors. Learn more about Linda and her books at http://www.LindaShentonMatchett.com.

A Doctor in the House: They’re supposed to be allies, but mutual distrust puts this pair on opposite sides. Emma O’Sullivan is one of the first female doctors to enlist after President Franklin Roosevelt signs the order allowing women in the Army and Navy medical corps. Within weeks, Emma is assigned to England to set up a convalescent hospital, and she leaves behind everything that is familiar. When the handsome widower of the requisitioned property claims she’s incompetent and tries to get her transferred, she must prove to her superiors she’s more than capable. But she’s soon drawn to the good-looking, grieving owner. Will she have to choose between her job and her heart?
Purchase link: https://amzn.to/2YvPuZo
Posted by Linda Matchett at 12:30 AM