Time to Fry Up (or Shoot Up) Corn Dodgers

I started this post by thinking I would research an awful thing called “hardtack”
that was familiar to sailors and soldiers. I eventually discovered there wasn’t much good to say about the stuff often referred to with such delicious sounding names as “shipbiscuit”, "tooth dullers," "sheet iron" or "molar breakers" digestible leather," or "ammo reserves.". In case you’re interested though, you can make hardtack with three simple ingredients, flour, salt and water. Roll it into squares and bake it until every trace of moisture is gone, then let it dry some more until it gets even harder. Sounds yummy, huh? None for me, thanks.

So I left the hardtack post behind for now. The rabbit trail I went down from there took me to a thing called a corn dodger, which I found much more interesting (and palatable!) These are an item frequently baked and eaten by the American pioneers in their westward migration or by cowboys on cattle drives. The corn dodger was apparently a little tastier despite the fact that it didn’t last as long.

Many stories exist about corn dodgers and it’s hard to say which are true for sure. Some probably are factual like Abraham Lincoln was raised on these little oval cornmeal cakes and George Washington Carver took them to school in a lunch pail for the midday meal. One that is definitely fiction but still my favorite is that Rooster Cogburn (John Wayne) used them for target practice in the movie ‘True Grit.’ 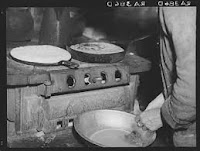 Remember the scene where Rooster offered Mattie Ross a corn dodger from his pocket as they sat on a dark hilltop? Mattie refused the corn dodger because she couldn’t see well enough to check and “some of ‘em got blood on ‘em.” Unless I missed that part, we never learn why Rooster’s corn dodgers were bloody, but I digress.

The first corn dodgers date back to the early 1800s and were made from a mixture of cornmeal, pork fat, salt and boiling water commonly referred to as “hot water cornmeal.”   Basically, these ingredients were usually available and perhaps, all the food to be had on a wagon train. What else would you make out of corn meal and pork fat over a campfire? 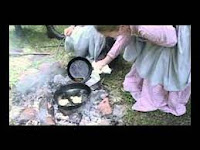 The coarse dough was shaped into individual size oblong loaves and baked. Corn dodgers were referred to with different names and variations to the cooking method depending on the use and area of the country. Some were pan fried in oil (corn pone), 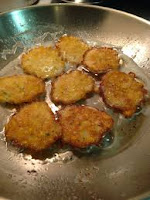 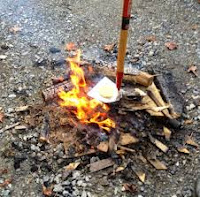 Most 19th century recipes yielded corn dodgers that were dense, gritty and hard as a brick. This only served to make them last longer. Besides, you could use them for target practice right?

Corn dodgers are still eaten today and a staple in some parts of the country. The recipe has been improved, however. Start by replacing the appetizing ingredient of pork fat with butter or oil. (Whew, that’s a relief!) then add a little sugar to bring out the cornmeal’s sweet side. Replace some of the water with buttermilk for better flavor then add some baking soda and baking powder to lighten up the dodgers. An egg gives it a nice creamy interior instead of the old-fashioned coarse texture. I even found a recipe for you to try if you’re interested, no campfire required.

1/2 teaspoon salt
2 cups water
1 cup buttermilk
1 tablespoon unsalted butter
2 teaspoons baking powder
1 egg
Tap water
Heat oven to 450. Brush 1 TB of oil on a rimmed baking sheet. Whisk the cornmeal, sugar, baking soda and salt in a medium bowl. Combine the water, buttermilk and butter in a large saucepan. Whisk the cornmeal mixture into the liquid. Cook the mixture over medium-high heat, whisking constantly, until the water is absorbed and the mixture is very thick, about 6 minutes. Remove from heat and cool until warm, about 10 minutes. Whisk the baking powder and egg in a small bowl, then stir into the cornmeal mixture. Fill a medium bowl with tap water. Scoop out a generous 2 tablespoons of the mixture and, using wet hands, form into a 4-by-11/2-inch loaf shape. Place on the prepared baking sheet and repeat with the remaining mixture, spacing the dodgers about 1/2-inch apart. Brush with the remaining TB oil. Bake until deep brown on the bottom and golden brown on top, rotating the pan halfway through baking, 25 to 30 minutes. Transfer the corn dodgers to a rack to cool slightly. Serve warm (Keep leftovers in the refrigerator, not your pocket!)

Have you ever eaten a corn dodger? What are they called in your area? I’d love to see your comments about them.

Scribbling in notebooks has been a habit of Cindy Regnier since she was old enough to hold a pencil. she writes stories of historical Kansas, especially the Flint Hills area Cindy is married to her husband of 39 years, has two grown sons, a son residing in heaven, and two beautiful daughters-in-law. A graduate of Kansas State University with majors in Agriculture and Business, Cindy works for her local school district as clerk of the board of education and is active in her church and community. Her experiences with the Flint Hills setting, love for history, farming and animals, along with her interest in genealogical research give her the background and passion to write heart-fluttering historical romance.