About ten years ago, my husband and I visited the MaHaffie Stage Stop when I was doing research for a series I wanted to write a series set in Kansas. Little did I know then that my trip to MaHaffe's would inspire me to write a three-book trade fiction series. Years later, I penned a novella called Julia, which is set on the Santa Fe Trail where MaHaffe's is located near Olathe, Kansas. (Julia, is currently on sale for 99 cents.)  Now, I'm writing another novella, Laney, with the same setting. 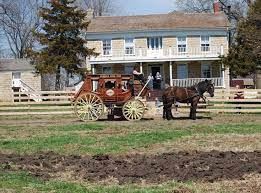 Mahaffie Stage Stop and Farm
James B. and Lucinda Mahaffie purchased the farm in 1857. In 1858, the Mahaffies used oxen to move the wood frame home from the downtown lot they purchased in November of 1857 to their new holdings, about a mile outside of Olathe. The family lived in that home until the new stone house that still stands was finished late in 1865. The Mahaffie farm was one of the most prosperous in Johnson County in the 1860s and early 1870s. The farm is located on the “Westport Route” of the Santa Fe Trail, which also carried travelers leaving Westport, Missouri and crossing what is now the Kansas City metro region for the Oregon and California Trails as well as the Santa Fe Trail.
The Barlow, Sanderson, and Company Stagecoach Line contracted with the Mahaffie family to provide one of the stops needed for their coaches carrying passengers and, in some cases, mail between Fort Scott and Fort Leavenworth, and from Independence, Missouri all the way to Santa Fe, New Mexico.

It is believed the Mahaffies started serving meals to travelers from their first home as early as 1858. By 1864, coaches began using the farm as a stop. Late in 1865 and until about 1870, coach passengers and other hungry travelers took their meals in the basement of the “new” stone farmhouse, designed to serve as a kitchen and dining hall.

In 1867, Lucinda, her daughters, and hired helpers might have served as many as 50 to 100 meals a day. While coach passengers ate, incoming teams of horses were switched for fresh animals. Follow in the footsteps of these same passengers and travelers when you visit!

What can you see there? The Heritage House Museum gives you some of the history of Mahaffie's, and you can tour the historic farmhouse, barn, ice house, cellar, smokehouse, blacksmith, and more.  Check out www.mahaffie.org 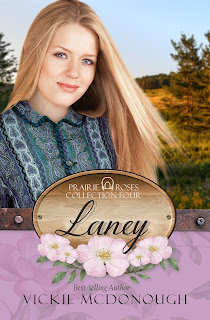 Laney
Vickie McDonough
Laney Dawson is desperate to leave Council Grove, KS. Her abusive father is getting out of prison in a week, and she refuses to allow him to hurt her again. With few options available for a young woman, she poses as Lane, a teen boy, and hires on with a family traveling the Santa Fe Trail. Laney regrets lying to the kindhearted Buckley family, especially Ethan, the oldest of the five siblings. As her feelings for Ethan grow, she knows she needs to tell him the truth, but will he leave her at the next town when he learns she's a woman? Laney is on pre-order at Amazon for just $2.99
Posted by Vickie McDonough at 1:30 AM