Easter is the most passionate holiday season of the year. Beginning with Ash Wednesday, many Christians begin 40 days of fasting and prayer called Lent, recalling Christ’s 40-day fast in the wilderness.

The Easter of 1865 was no exception. Americans were hungry for joy. Blooming trees, colorful clothes and, yes, Easter lilies. Easter lilies symbolized purity, rebirth, and a new beginning. 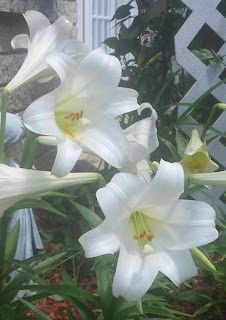 People longed for a new beginning, a rebirth from the haunting memories of pain and deprivation. They sought a reason why their lost loved ones whose chairs would remain empty that Easter Sunday, had died.

The Civil War climaxed to an abrupt end, and Lincoln rose to the task of binding the nation's wounds. Reconstruction was underway—at least in Lincoln's mind it was.

Then it happened. The incomprehensible and unexplained assassination of their beloved leader the day before their Easter celebrations! 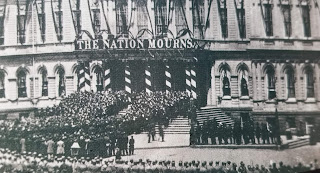 Disbelief, panic, then grief, befell the already mourning public. One American poet, Walt Whitman, put into verse the cries and heart-wrenching agony of his fellow countrymen:

O Captain! my Captain! our fearful trip is done,

The ship has weather'd every rack, The prize we sought is won…

My Captain does not answer, his lips are pale and still,

My father does not feel my arm, He has no pulse or will…. 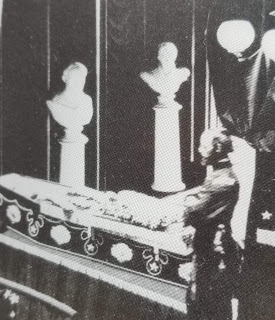 As part of a nationwide day of funeral observance of President Lincoln's assassination, Presbyterian pastor Henry E. Niles, a new pastor for York, Pennsylvania's Presbyterian Church, rose up in his pulpit and preached an unforgettable sermon that grabbed the hearts of his congregation that day. The address rests in the files of the York County Heritage Trust archives.

"And what an Easter Sabbath was that when, all over the land, bells that a few days before, had been ringing out their joy peals on the festal air, were tolling the knell of a nation's Hopes - When flags, which had blossomed out from every window in the sunshine of victory, were fringed in crepe - their exultant folds gathered with bands of funeral black . . . And soberness - usually reserved for Good Friday in observance of Jesus' crucifixion - extended into the churches that Easter. People wore ‘badges of mourning,’ and ‘drapery of woe’ hung in the churches. What a Sabbath, when, instead of swelling anthems of Praise," he proclaimed, "we called for dirges of Grief . . ."

When in our nation's history has a people of a nation mourned so?

There were no flowery bonnets and fluffy bunnies or baskets of chocolate candies that Easter. 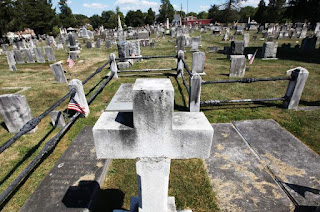 That Easter, no one forgot what the cross and resurrection meant.

Though pagan symbols pop up in a pleasing simulation of traditions, still, the blooming spray of truth intertwined with the crucifixion of Jesus rises into the crowning glory of a resurrected Christ. That Easter in 1865, with Lincoln suddenly leaving the stage of earthly life for his celestial home, says it all too plainly.

William McKinley, said this again some thirty years later: "The purposes of God, working through the ages, were, perhaps, more clearly revealed to him (Lincoln) than any other…. He was the greatest man of his time, especially approved of God for the work He gave him to do."

Here are Reverend Niles' closing remarks that Easter Sunday the 16th of April 1865:

"Today, shall they pledge themselves anew, amid the music of funeral hymns . . . trust in the President of the Universe, our fathers' God, to guide us safely through this whirlwind of confusion and over this sea of blood, into the fair haven of an honorable, a lasting and a glorious Peace."

The Easter lily, shaped like a trumpet, with its tall green stem and flowering pure-white fragrance has become a symbol flower of Easter through the passing centuries as millions of Christians in all parts of the world depict the heralding joy in the resurrection of Jesus Christ.

Our Lord exclaimed from the cross as his last breath escaped his lips, "It is finished."

Like Lincoln, we must finish the work our God has set before us in equal finality and pledge anew to trust in the President of the Universe. If you allow Him, God will guide us safely through the whirlwind of strife and hardship, across the sea of confusion to a lasting and glorious peace. 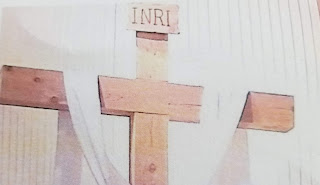 Swept into Destiny (book one of the Destiny series) Ben McConnell is a proud Irish immigrant who is determined not to give up despite hunger and deprivation. He clings to his mustard seed faith believing—nothing is impossible. 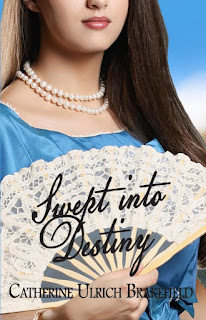 Maggie Gatlan is a rebel disguised as a Southern belle. Ben’s and Maggie’s journeys delve deeply into the truth about faith and devotion.

“Brakefield’s flowing descriptions pull you into Swept into Destiny and keep you immersed in the world of the Antebellum South…This isn’t just a world of beaus, belles, and balls, but of moral ambiguity and searches for truth…” L.H. Reader

“My readers encourage my writing!” Catherine is an award-winning author of the inspirational historical romance Destiny series (Swept into Destiny, Destiny’s Whirlwind, Destiny of Heart, and Waltz with Destiny) and Wilted Dandelions,

She is a longtime Michigan resident. Catherine lives with her husband of 50 years, has two adult children, and has four grandchildren.