We’ve all heard of Stonehenge, the monument near Wiltshire England, made up of standing stones topped with horizontal stones. Many people travel to the Salisbury Plain to view this ancient archaeological site that is a marvel to see. Stonehenge is believed to be 4,000 years old.

We’ve also heard of Easter Island and the mysterious carved statues found there. This island is part of Chilean territory and a remote volcanic island, much more difficult to visit. Still the figures are fascinating as is the mystery surrounding them.

But, how many of us have heard of Iniskim Umaapi? I know I hadn’t until an article about this ancient site was shared with me. What I learned was fascinating.

Iniskim Umaapi is considered by many to be Canada’s Stonehenge. Located in a remote section of Alberta and not easily found, the medicine wheel is huge and believed to be formed by the Blackfoot, an indigenous people. The religious site or geoglyph was formed about 5,000 years ago. Those who formed this geoglyph believe the site has great spiritual power.

Iniskim Umaapi—buffalo calling stones sacred site—is made up of a main cairn surrounded by 28 radiating stone lines. Those lines are encircled by another ring of stones and measures twenty-seven meters in diameter. This is called a medicine wheel because of the shape of the design. Early settlers named it the Majorville Medicine Wheel after a general store and post office that were nearby.

There are many medicine wheels located in the northwest American and Canadian plains. Iniskim Umaapi is far older than any of the others. It is as mysterious as Stonehenge is in England. The history is lost with the people who formed the geoglyphs.

There are theories about why Iniskim Umaapi was built. Perhaps to mark the seasons, a calendar of sorts. There is a possibility this was an open-air temple where people worshiped. We may never know it’s original use but the fact remains that this wheel is “the most intricate stone ring that remains on the North American Plains.” (Quote from Gordon R. Freeman’s book, Canada’s Stonehenge.)

Freeman camped at this site when he was researching his book over thirty years ago. He found amazing similarities to Stonehenge and other ancient temples. There are twenty-eight spokes to the wheel that fan out from the central cairn. This points to a solar calendar and ceremonial purposes.

Although Iniskim Umaapi is much more remote and hard to find than Stonehenge, you can access it. There is a marker at the site. The site is located on government land but also surrounded by private land with access to the site. Permission might be needed to visit. This would be an interesting place to go and see the amazing feat of these Indigenous people.

Have you ever heard of Iniskim Umaapi? Have you ever visited a medicine wheel or Stonehenge? I love seeing historic sites like this and imaging how and why they were built. I’d love to hear your thoughts.

Nancy J Farrier is an award-winning, best-selling author who lives in Southern Arizona in the Sonoran Desert. She loves the Southwest with its interesting historical past. When Nancy isn’t writing, she loves to read, do needlecraft, play with her cats and dog, and spend time with her family. You can read more about Nancy and her books on her website: nancyjfarrier.com.

I have re-released my Sonoran Desert series. These books are set in 1870's Arizona Territory. If you haven't read them, this is your chance. If you leave a comment on my blog post before midnight May 18, 2022, and leave your email, I will gift you an ebook copy of Sonoran Sunrise. 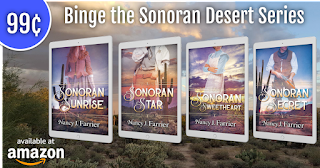 Meet the women of the Sonoran Desert series and the men who fall in love with them. Glorianna, forced to leave her home back east to join her father at his Arizona army post and the infuriating and intriguing lieutenant. Kathleen, who travels to Tucson to visit her cousin, Glorianna, and is mistaken for an outlaw by a handsome deputy. Lavette, an indentured servant, who can’t fall for the gentle blacksmith. And Chiquita, forced to disguise herself and marry a man who wanted her sister. Find the series here.