Common sense might suggest that an artwork bearing the distinction of “Most Stolen” is small enough to be easily concealed and easily transported.

Common sense would be wrong.

The Ghent Altarpiece, also known as The Adoration of the Mystic Lamb, is a 15th century 18-paneled polyptych that measures an incredible 11’5” x 15’1” when the panels are open.

To put that in perspective, the width is three times my height!
Yet, this cumbersome painting is notable for being the target of thirteen crimes and seven thefts.

For example, “The Just (Righteous) Judges” panel was stolen from the St. Bavo Cathedral (Ghent, Belgium) on April 11, 1934.

Noah Charney, the author of Stealing the Mystic Lamb, writes in an article for The Guardian that the thieves demanded a ransom and returned the back half of the stolen panel—a painting of John the Baptist. However, the transaction doesn’t seem to have taken place.

Arsène Goedertier, a stockbroker, confessed to the theft to his lawyer after suffering a deadly heart attack. He left behind a handwritten note which says that the panel “rests in a place where neither I, nor anybody else, can take it away without arousing the attention of the public" (The Guardian).

Strangely, the cheese shop across the street was also robbed that night. Were the two thefts connected? That’s another unsolved mystery.

In describing the importance of the altarpiece, attributed to brothers Hubert and Jan van Eyck, Charney writes:

“It's easy to argue that the artwork is the most influential painting ever made: it was the world's first major oil painting, and is laced with Catholic mysticism. It's almost an A to Z of Christianity—from the annunciation to the symbolic sacrifice of Christ, with the ‘mystic lamb’ on an altar in a heavenly field, bleeding into the holy grail” (The Guardian).

Jordan Cook, who has a master’s degree in Medieval Studies, has this to say about the altarpiece:

“No painting begs such detailed and concentrated looking more than the Ghent Altarpiece. Despite Jan van Eyck never intending the altarpiece to be inspected so closely, his own eyes seemed to work on a microscopic scale. With its refined symbolism coupled with its unparalleled naturalism, the Ghent Altarpiece truly is a testament to the art of painting” (The Collector).

Here's a brief history of the other crimes and thefts:

In 1794, French soldiers plundered several works of art from what is now—but wasn’t then—an independent Belgium. The altarpiece was taken from Ghent and exhibited at the Louvre in Paris. After Napoleon was defeated at the Battle of Waterloo in 1815, the altarpiece was returned to Ghent.

The Diocese of Ghent pawned certain panels in 1815 and didn’t redeem them. The pawned panels were sold in 1816 and again, this time to the King of Prussia, in 1821. Eventually they were put on display at Berlin’s Gemaldegalerie.

The panels that weren’t pawned were damaged in a fire in 1822.

Also in 1822, a museum in Brussels took possession of the panels depicting Adam and Eve.

German forces stole the remaining panels during World War I. These panels and the panels purchased in 1821 were returned in 1920 under terms set by the Treaty of Versailles.

The altarpiece was on its way to the Vatican for safekeeping in 1940 when Italy joined Germany in the war. It was sent instead to a museum in southern France. Hitler seized the altarpiece in 1942 and it eventually ended up in the Altaussee salt mines in Austria. The Monuments Men recovered the altarpiece and a whole lot more in 1945.

My first post in this series shares more about the Monuments Men: New Monthly Series ~ Stolen and Lost Artwork. 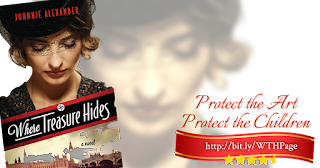 Johnnie imagines inspiring stories in multiple genres. A fan of classic movies, stacks of books, and road trips, she shares a life of quiet adventure with Griff, her happy-go-lucky collie, and Rugby, her raccoon-treeing papillon. Visit her at johnniealexander.com.