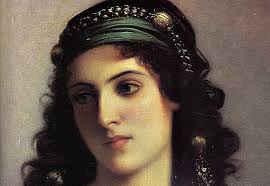 Abigail is the quintessential example of a woman who knows how to deal with difficult people. Many woman are married to abusive men, and Abigail is no exception. We learn about Abigail in I Samuel 25. She is married to a wealthy man named Nabal, the Calebite. It’s possible her marriage was an arranged one. Abigail’s father perhaps offered his daughter as part of a business deal with Nabal. 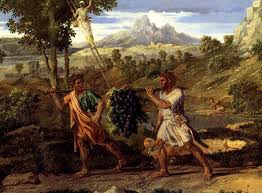 So what do we know about this abusive husband? Nabal’s ancestor, Caleb, was a spy, along with Joshua, who returned from Canaan with a good report of the promised land. So, Nabal came from a good lineage, yet Nabal’s name in Hebrew means stupid, brutal, morally perverse. II Samuel tells us Nabal was surly and mean in his dealings, and he certainly showed this in his dealings with David and his men, returning evil for good. “One of the servants told Abigail, ‘David sent messengers from the wilderness to give our master his greetings, but he hurled insults at them. Yet these men were very good to us. Now think it over and see what you can do, because disaster is hanging over our master and his whole household. He is such a wicked man that no one can talk to him.’” I Samuel 25:14-17. 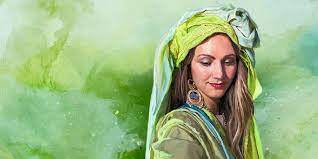 I Samuel tells us that Abigail was beautiful and intelligent.(v.3) So how did Abigail respond, and what can we learn from her? The word ‘intelligent’ means full of wisdom, knowledge, and prudence. She demonstrated these qualities when she thwarted David’s imminent plan to destroy every male of her household. 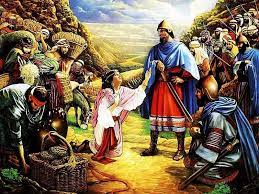 First of all, Abigail acted quickly and intentionally. She sent her servants ahead with two hundred loaves of bread, two skins of wine, five dressed sheep, roasted grain, and two hundred cakes of pressed figs. This was what her husband should have done.Second, she showed humility. When Abigail saw David, she bowed down before him with her face to the ground and begged for forgiveness. “And now, my lord, as surely as the Lord your God lives and as you live, since the Lord has kept you from bloodshed and from avenging yourself with your own hands, may your enemies and all who are intent on harming my lord be like Nabal. And let this gift, which your servant has brought to my lord, be given to the men who follow you.” (I Sam. 25:26,27) 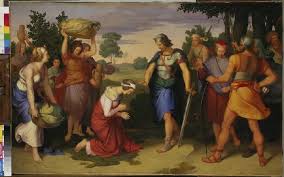 Third, Abigail demonstrated she was a student of the Bible. She reminds David of God’s plan for him to become king of a lasting dynasty, despite the fact that King Saul was pursuing him to take his life. In verse 31, she closes her plea with, “…my lord will not have on his conscience the staggering burden of needless bloodshed or of having avenged himself. And when the Lord your God has brought my lord success, remember your servant.” David accepted her apology and withdrew his command to destroy every male. 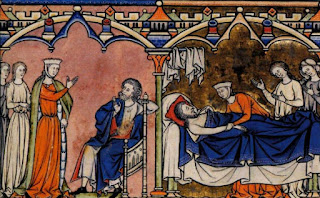 Fourth, Abigail demonstrated the importance of timing and restraint. Instead of confronting her husband when he was drunk, she waited until he was sober in the morning to tell him what she’d done. Verse 37 and 38 tell us Nabal had a stroke, and the Lord struck him dead ten days later. 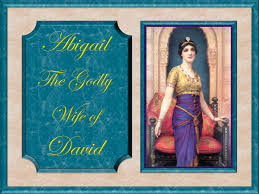 When David sent word to Abigail asking her to become his wife, her response demonstrated humility. She bowed down with her face to the ground and said, “I am your servant and am ready to serve you and wash the feet of my lord’s servants.” Abigail became David’s second wife and gave birth to his second son, Chileab, also known as Daniel. 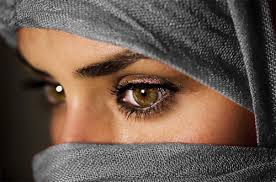 Abigail is often overlooked as one of the great women of influence, but there’s no better example of a woman who brought peace in the midst of an emergency. She is the epitome of I Peter 3:1,2: “Wives, in the same way submit yourselves to your own husbands so that, if any of them do not believe the word, they may be won over without words by the behavior of their wives, when they see the purity and reverence of your lives.” Nabal obviously didn’t get the message. 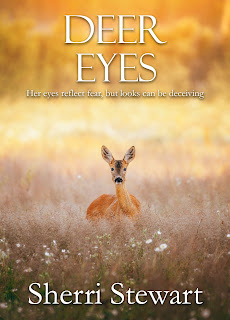 Selah Brighton has reason to be wary, which is why she chose to hide in Bar Harbor, Maine. The fewer people who know her story, the less danger she’ll bring to their lives. It’s not wise to stay in any place for long, but something about Judd Trudeau makes it hard to maintain her resolve. https://amzn.to/3xYfXwy
Posted by Sherri Stewart at 12:30 AM