Charles Carroll of Carrollton, My Ancestor-In-Law

When my husband and I talk about genealogies in our families, my side is boring. But his is rich in history. He has ancestors who came over on the Mayflower; his great-uncle Major General Frank Carroll was instrumental in creating the Army Air Corp and escorted Orville Wright on his last flight before his death aboard a prototype 4-engine prop aircraft; his father helped to pioneer the very first aircraft radio repair shops in the Army Air Corp/Airforce during WWII.
If that wasn't enough, hubs is the direct descendant of one of the signers of the Declaration of Independence, Charles Carroll of Carrollton, even down to the fact that his mother's maiden was Carroll.
Who was this man?

He was the third Charles in a line of wealthy and influential men. In the late 1600s, his grandfather was known as Charles Carroll the Settler, a descendant of Domhnall O’Carroll, the king of Eile of the ruling class in King’s County, Ireland. Years later, a branch of the Carroll family immigrated to Colonial Maryland where his father adopted the name Charles Carroll of Annapolis.

Along came Charles Carroll III, or Charley, as the family called him, on September 19, 1737. He, along with other members of his family, became involved in the formation of the United States of America.

Charles subscribed to Freemasonry, a fraternal order of men of good character that started in England in the 1700s amongst the stone masons. It was to assure good quality, of both skill and character, particularly as cathedrals were built. In the colonies, Charles laid the cornerstone of the Phoenix Shot Tower in Baltimore.
In 1828, the Phoenix Shot Tower was, at the time, the tallest structure in the United States. This building, which resembled a smokestack, was used for producing shot for muskets. Molten lead would be poured from the top of the tower through a sieve and as it dropped, would cool into a perfect sphere, then land in a bucket of water at the bottom to cool further. 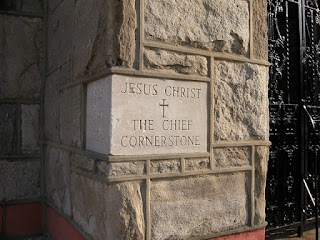 What does it mean to lay a cornerstone? In religious circles, we know this to mean that Christ is our cornerstone. Ephesians 2:19-22. The Freemasons expounded on this idea as they formed the corner of a structure—a cube—to aid in constructing the rest of the building by giving it a good foundation, plumbed and true. This is why the order was important in providing trained master craftsmen.
Charles was a founding member of the B&O Railroad, and at the age of 92, laid the first stone on the historic Mount Clare site in Baltimore which is still on display at the museum.
Charles’s father granted him a 17,000-acre tract of land he’d named Carrollton Manor. Charles never lived on it, but he became a wealthy landowner as he leased to tenant farmers.

As a Roman Catholic, Charles was banned from getting involved in politics, but he couldn’t stand by while the British tried to usurp their position in the land he now called home. He became an opposing voice of taxation as an anonymous author of articles in a newspaper, under the byline “First Citizen.” Due to his involvement in freeing the colonies from British rule, and despite the strict directive from the church, he was elected to the Continental Congress on July 4, 1776, and remained a delegate for two years.

It was by this avenue that he was present to sign the Declaration of Independence. He had been penning his name as Charles Carroll of Carrollton for over a decade, but, according to John Hix, a newspaper journalist in 1940, he had initially signed just his name, without the added distinction. Signing the document meant criminalization, guilty of sedition against King George III. One of the people present was prejudiced against Charles because of his Catholic beliefs and complained that he risked nothing because his name was common in the colonies. As the wealthiest man in the room, Charles knew he had the most to lose. But when the man spoke out, Charles walked back to John Hancock’s desk and added “of Carrollton” to prove his dedication to the cause. No one could confuse him with his father, Charles Carroll of Annapolis, who was still alive, or with other members of his family, Charles Carroll the Barrister, or Charles Carroll of Homewood, who was his own son. 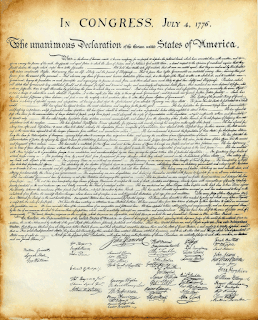 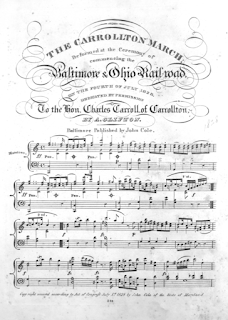 A song was penned in his honor, entitled The Carrollton March, and is the first known train song published July 1, 1828. It was to commemorate the groundbreaking of the Baltimore & Ohio Railroad three days later. To listen to this cheery ditty, go HERE.
Charles Carroll III became the last living signatory, dying at age 95 on November 14, 1832.

When I see images of this great man, I can imagine my husband’s grandfather, Stanley Carroll, with the same features, notably his piercing eyes and distinct nose. I’m amazed at how close the founding of our country is to our family. Is it any wonder we have fiercely defended her through four generations of military service? To see our legacy, go to Blog . . . With A Giggle: Thank You For Serving! 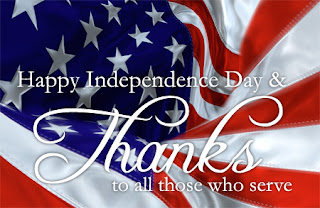 A Bouquet of Brides Collection
Meet seven American women who were named for various flowers but struggle to bloom where God planted them. Can love help them grow to their full potential?
"Periwinkle in the Park" by Kathleen Kovach
1910, Colorado
Periwinkle Winfield is a hiking guide helping to commission Rocky Mountain National Park. But a run-in with a mountain man who is determined to keep the government off his land may place her in great danger.