Although I born in and grew up in Dallas, Texas, I came to Houston at the age of 21 in June of 1957 right after graduation from Baylor University. Since that time I have been fascinated by the history of this city that isn't on the Gulf, but still has a large shipping port at Port Houston on the Houston Ship Channel.

One hundred and twenty years before that Augustus and John Allen founded the city at the junction of Buffalo Bayou and White Oak Bayou in 1837. The brothers had traveled about East Texas looking for land to acquire and develop, and finally decided on the flat prairie along the two bayous as their choice. The brothers purchased the land in 1836 for $10,000 from Elizabeth Parrot. The land encompassed 1247 acres.

In May of 1837, the Texas Congress met for the first time in Houston with the town designated as the Capital of Texas. This is drawing of the building that was constructed to serve as the Capitol Building. 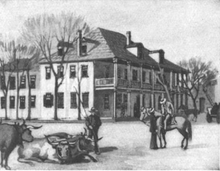 However, in January of 1840, the congress voted to move the capital to Austin where it remains today.

Houston became known as a wild and wooly town and faced financial difficulties as well as an outbreak of yellow fever that drained the town. A large group of citizens made it their goal to gain some type of order. Just two weeks after the capital moved, congress voted and Mirabeau B. Lamar signed for the town to establish a Chamber of Congress which then began a clean-up that allowed the town to grow in a little more orderly fashion. 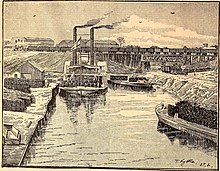 When the first steamship visited the port in December of 1837, the town had only twelve residents. A few months later, 1,500 people had arrived and 100 houses comprised the town. This picture came later as the port grew and became a busy port for the Gulf of Mexico.

Houston was a part of the independent nation of Texas until it was formally annexed as a state in 1846. Then, in addition to the port activity, the town began railroad development. Houston still grew as more people headed toward the coast. By the 1860's the town began to have the look of a city as multi-storied buildings were built along Main Street. This how Houston looked at that time just before the Civil War.

Railroad development ceased as the nation entered the Civil War. Houston then served the Confederacy as a regional military logistics center.
Houston still grew as more people headed toward the frontier and then the coast. During reconstruction in 1869, the Ship Channel Company was formed to deepen Buffalo Bayou and make it easier for ships to access the port. Despite the unrest, Texas businessmen joined together to develop the railroad system. At the same time the cities of Dallas, San Antonio, Fort Worth, and El Paso were being built up and expanded.
Houston continued to grow after it was readmitted to the Union. Freedman opened businesses and worked for wages under contract, the Freedman's Bureau stepped in and prevented abuse of the contracts. However, despite the rich history of the birth of the state and Houston, African Americans had a hard time voting because of Jim Crow Laws the state enacted to make voting more difficult if not impossible for these citizens. Segregation also became legal across the state.
Houston in the 1870's 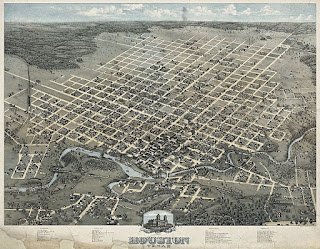 Several significant events took place in Houston. It was the site of the first State Fair of Texas in 1870, but the fair relocated to Dallas in 1878. A new streetcar service conveyed visitors between the fair in "Midtown" and Central Houston. The cars were pulled by mules from 1874 to 1891 when they were switched over to electric streetcars. By the end of the century, at least ten railroads did business in Houston, the Sisters of Charity Hospital had opened its doors, and the Houston Post and Houston Chronicle newspapers had been founded. 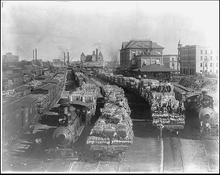 Railroad picture By John D. Roberts - Library of Congress
According to the 1900 census, Houston now had a little over 58,000 living in the city. The city continued to grow. Next month I'll write more about the city in the early days of the 20th Century.
Do you still live in or near the city where you were born? If not, how long have you been away and where are you now?