A couple weeks ago, I watched a 2011 movie titled Fort McCoy, which is the primary camp in Wisconsin where prisoners were sent during WWII before many of them were later sent to temporary branch camps to work. The movie is based upon the true story of a barber's family who lived next door to the camp and interacted with some of the prisoners during the war. (A compelling movie, but rated R for some violence.)

I couldn't recall if I'd ever seen the movie before. Parts were familiar, but it may be that I never saw the whole thing, or that I wasn't thinking about writing a WWII novel at the time I viewed it. Either way, it was interesting to see this take on the period and camp life, after having written my novel Season of My Enemy, which released just last month.

However, since a number of book reviewers found the author's note at the end of Season of My Enemy interesting and informative, I thought I should share a little more about camp life at both Camp McCoy and the branch camps.

Why were they brought here?

As I mention in my author's note, German prisoners captured after 1942 were sent here from England. As England was basically standing alone against the Germans by that point, they were housing several hundred thousand Germans taken captive, mostly from the African campaigns. But then a rumor circulated that Hitler intended to air drop weapons to the prisoners. By then America had gotten into the war, so our government agreed that, logistically, it was in the best interest of all to to put the prisoners on our empty troop and supply ships returning from Europe, and keep them here in the U.S. Besides the many Germans brought to the U.S., there were also Japanese, Italians, Koreans, Russians, and prisoners of other nationalities incarcerated here.

Most Americans were unaware of their presence, an intentional effort by the government. Officials worried that knowledge of the "PW" presence would cause panic and fear of escape or, worse still, retaliation.

The military planned to use pre-existing military bases for the camps. One of those camps, Camp McCoy in west-central Wisconsin, had been built as an artillery camp after the Mexican-American war and named for Major General Robert Bruce McCoy who conceived the idea for it. By WWI, improvements were made that built it into a major training camp. It didn't officially become named "Camp McCoy" until 1926. Then, in the 1930s, it served as a supply base for the Civilian Conservation Corp (CCC). However, with another World War looming on the horizon, Camp McCoy once again became a training ground for the military and, soon enough, a relocation camp for prisoners. (Ford McCoy has played many roles over the years since. Recently, Fort McCoy has served as a housing and relocation site for Afghan refugees.)

During WWII, there were approximately 35 buildings at Camp McCoy. Kitchens, bath houses, messes, and barracks were enclosed inside a 20-acre compound. Later on, the Japanese built their own bath house so they could practice specific bathing rituals. Six guardhouses equipped with powerful spotlights looked over the perimeter fence that was buried five-and-a-half feet deep to discourage digging. McCoy also kept a kennel of trained guard dogs which were used to patrol the border. For entertainment--and to strike dread in the hearts of prisoners--handlers sometimes showed off their dogs' skills in camp demonstrations. 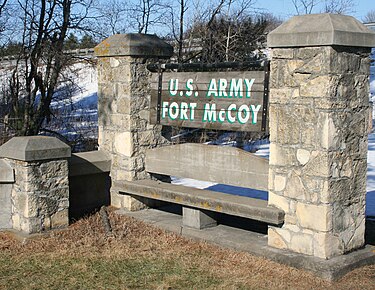 Most prisoners remained within the confines of the camp. There, they completed maintenance and general construction building barracks, roads, and clearing bombing and artillery ranges. They ran the laundry and the incinerators, worked in the kitchen, and performed routine cleaning and other tasks that would free some of the American GI's for important military duty.

Per the treaty of 1926, prisoners could never be forced to work. However, with Camp Ellis, Camp Custer, and Fort Sheridan also in the upper Midwest, Wisconsin capitalized on the opportunity to use prisoners to fulfil labor shortages brought on by the war. A system was devised for prisoners to leave the compound to work in canning factories, on farms, and in other agricultural endeavors and to be paid in camp script--like coupons. Some were marched to factories, but most were transported in trucks to their work location.

Not all the prisoners were allowed to do this. Those considered hardened Nazis or sympathizers remained inside McCoy's fencing. But for those who were allowed to work, the government set up branch camps around the state. In Wisconsin, there were 38 of these branch camps. Housing was, in some cases, unique. Tent cities sprang up in fields and on fairgrounds, while other barracks were set up in old hotels, a curling rink, and even a ballroom and in an abandoned insane asylum.

The scrip prisoners earned equaled about 80¢ a day and could be used to purchase personal supplies in the camp canteens; items such as stationery, cigarettes, soap, socks, sweet treats, and even beer.

In researching my novel, I also found it interesting that many prisoners were able to have savings accounts established for their unspent scrip, and when the war ended, they actually went home with a few dollars in their pockets. However, if their route home took them through France, their savings were usually confiscated. The route through England allowed them to keep their wages and was usually quicker too.

Camp Life
Though many of us have grown up learning the horror stories of starvation among Allied prisoners of war overseas during the war, Axis prisoners here in the states were well cared for, per the Geneva Convention rules that food and housing be equal to the host's military and, in many cases, out of simple human courtesy. Initially, at Camp McCoy, the prisoners were fed the very same things as the American G.I. guards, by 1943 a Prisoner of War circular allowed them to be fed with more of their ethnically traditional foods, as long as the food didn't cost more than the original rations and nothing was wasted.
Soon, the Japanese were able to have rice, sukiyaki, dried fish and pickles included in their menus, while the Germans enjoyed pigs' knuckles, pork, and wurst.
Local citizenry was a bit incensed about the good treatment at times, although some farmers and factory-owners were known to feed their work crews liberally or to bring them treats. Not until 1945, when American soldiers were liberated from captivity in Germany and their poor health conditions discovered, and inspections of their prison quarters were taken into account, did the quality and quantity of prison camp food deteriorate.
Nevertheless, prior to that point, the military made every effort to accommodate prisoners. Church services were available, and each branch camp had a chapel. At some of the branch locations, congregations local agreed to let prison guards march or truck the prisoners to their churches if they wished to attend. At Camp McCoy, the Japanese were even given leave to build a Buddhist shrine. During holidays, traditional foods were provided. Some prisoners even celebrated Hitler's birthday and the Asian new year.
There were other amenities given to the PWs also. Routine medical and dental care were provided and even surgery if necessary. Prisoners were able to send out weekly correspondence, limited to alternating one postcard one week and one short letter the next--censored, of course. They also received incoming mail and care packages, though sporadically as the war lengthened and became more chaotic overseas. Some of the prisoners who remained on base worked in the mail room, woodworking, and other service shops.
Recreation
Camp Life wasn't all work. Many forms of recreation were offered to keep the prisoners content. Often the YMCA provided amenities such as books, musical instruments, art supplies, stationary, and other hobby materials. Prisoners could get rid of excess energy in their free time with volleyball, fist ball, soccer, or calisthenics. Sometimes branch camps held intramural soccer matches or they were given opportunity to swim. In larger camps, PWs were able to watch movies and news reels--usually beset by propaganda--or they could join chorus groups, quartets, and theatrical groups. Some prisoners even had pets ranging from birds and dogs to orphaned fawns.
Once a month, many of the larger camps were open to visitors. You might wonder at this if you didn't realize that Wisconsin has a large German immigrant population. Many German prisoners had relatives here in Wisconsin or other parts of the United States. There's a story of one young woman from Chicago whose brother was visiting their German homeland when war broke out. The brother was summarily drafted into the German army, captured, and wound up as a prisoner back at Fort McCoy. The young woman drove up from Chicago every month to see him. This is not an unusual story of German prisoners with family in the states.
All in all, the prisoners were treated very well while they were confined in Wisconsin. Many reported going home in better health and with more weight than when they arrived. Despite very strict discipline, there were never any reports of abuse in the camps.
Next time I'll share more about the PW experience here and about escape attempts and repatriation. Many of the historic tidbits I mentioned above found their way into Season of My Enemy. If you haven't read it, be sure an join the HHH bloggers next month for our 30-Million-Views celebration where you can have a chance to win a copy along with a multi-author prize package. 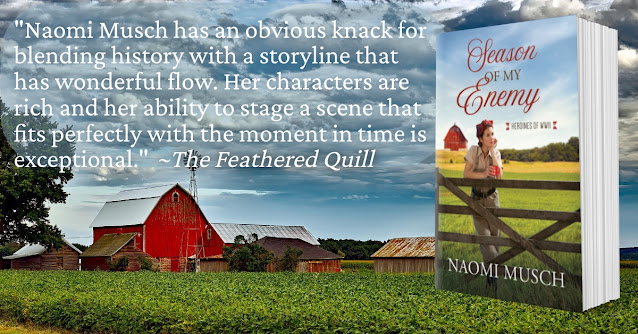 Available in Paperback, E-Book, Large Print, Audio
or talk to your local library about acquiring the Library-Bound version.
Buy Now!
Posted by Naomi Musch at 6:00 AM

Email ThisBlogThis!Share to TwitterShare to FacebookShare to Pinterest
Labels: Camp McCoy, German prisoners of war during WWII, life as a prisoner of war in America, Naomi Musch, Season of My Enemy, WWII prisoners of war