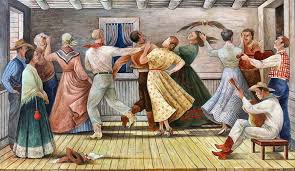 I vaguely remember learning a few square dance techniques in elementary school. Anyone else do this? What I remember well is how intrigued I was by the dance moves. I thought it was the coolest thing to dance according to someone’s directions. No pre-learning dance steps! But just how long has square dancing been around? Who invented it? Do people still do it? Let’s find out.

A square dance requires 8 people, four couples arranged in a square, with one couple on each side, facing the middle. 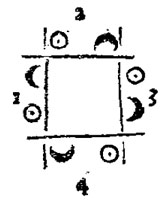 Square dances are actually composed of elements from numerous traditional dances and were first documented in 16th-century England, although their origins can be traced further back to steps and figures used in traditional folk dances and social dances. They also grew very popular in France and throughout Europe about that same time. The English referred to them as English Country Dances and the French called them Quadrilles. North America was introduced to square dancing by the European settlers from various countries and grew widely popular among the American pioneers hungry for a simple form of entertainment they remembered from their homelands. 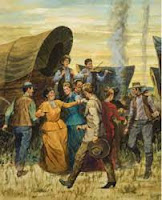 In some countries and regions, through preservation and repetition, square dances have remained popular. In the United States, we tend to associate it with the old America West, in part due to its association with the romanticized image of the American cowboy. I admit, that’s how I think of square dancing – something people did in the past, but I learned that plenty of modern-day people still do it and 31 of our states have designated it as their official state dance. 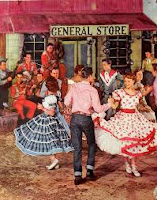 In most American forms of square dance, the dancers are prompted or cued through a sequence of steps by a caller. These callers are very talented, in my opinion, to be able to call out the instructions according to the beat of the music, sometimes even rhyming them. Traditional square dances of the type practiced by America settlers were influenced by such steps as the Morris dance from England as well as moves published in England in 1651 by John Playford in The English Dancing Master.

Europeans brought their dance moves to America, where the quadrille enjoyed considerable popularity after the American Revolution. In the nineteenth century, it became common practice for slave owners to force enslaved Black Americans to serve as musicians at square dances. They would eventually revolutionize the dance form by inventing “calling,” or announcing the steps and formation of the dances to dancers, which helped organize the dance floor. Calling would go on to become a defining characteristic of the form.

The Americanized quadrille, or square dance, is traditionally accompanied by accordion, banjo, fiddle or guitar. Most of the movements are based on a smooth, shuffling walk, but cooperation of the partners is more important than the actual steps. Who knew it was so complicated?

Have you ever been to a square dance? What did you enjoy the most, performing it or watching it? I’d love to hear about your experiences with square dancing.
She needs a place to hide—He needs a woman’s touch
But the sanctuary of Rand's Kansas cattle ranch comes with a price for Carly—a husband. While marrying a man she doesn't know or love means sacrificing her dreams, it's better than being caught by the law.
Or is it?
Posted by Cindy Regnier at 1:30 AM