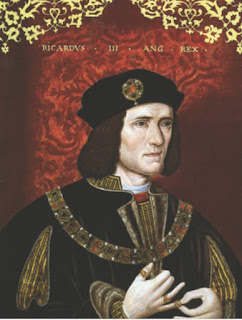 King Richard III. NPG 148/from David Williamson, The National Portrait Gallery
A King’s grave is lost... How can that happen?

This is one of the many mysteries surrounding the life and death of King Richard III, the last king of the Plantagenet dynasty. He ruled as King of England for only two years, from 1483 – 1485.

How did King Richard III die?

He was killed in the Battle of Bosworth Field on August 22, 1485 – the last battle in the Wars of the Roses. During the brutal fighting, King Richard III boldly placed the royal crown on his helmet for all to see. He was killed while courageously leading a cavalry charge aimed directly toward his opponent, Henry Tudor. After winning the battle, Henry (the future King Henry VII) arranged for Richard III's dead body to be taken to the nearest town, Leicester and displayed for all to see. The coronation of King Henry VII inaugurated the reign of the Tudor dynasty.

Was King Richard III really as wicked, physically-deformed and power-hungry as the legends about him claim?

More than a century after Richard III’s death, Shakespeare wrote a play called King Richard III, portraying him as a limping deformed hunchback and a villain with no conscience, who delighted in killing anyone who posed a threat to his power. (In medieval times, a body deformity was considered a punishment from God and proof of the presence of evil dwelling within that person.)

It is known that Richard III became king in 1483 by seizing the throne after the unexpected death of his brother, King Edward IV. Richard had been named as lord protector of his brother’s 12-year-old son, who was hastily crowned King Edward V. But Richard disputed his nephew’s right to the throne. He claimed that his brother had previously been betrothed (a legally-binding tie) to Lady Eleanor Butler, so King Edward IV’s later marriage to Elizabeth Wydeville wasn’t valid, and therefore both of their young sons were illegitimate. Richard insisted that he was the rightful heir to the throne.

After he was crowned King Richard III, he took custody of his two nephews, and they mysteriously disappeared. Richard was accused of murdering his two nephews, along with other rivals. But English medieval history was rife with violent power struggles.

Some modern-day historians wonder if the diabolical acts attributed to King Richard III might have been exaggerated or even invented by Henry Tudor. Henry could have deliberately tarnished Richard III’s reputation in order to cast himself in a favorable light, as the hero who defeated an evil king in battle, thereby strengthening his own claim to the throne.

Richard III demonstrated many positive traits. He proved his daring and courage in several battles. And years before he became king, Richard remained loyal to his brother, King Edward IV after he was deposed in 1469 by disloyal family members, allowing Henry VI to seize the throne.

Soon after Edward IV regained the throne in 1471, Henry VI was killed, and his brother George was executed as a traitor. Richard’s level of involvement in these deaths is a matter of speculation. And during his two-year reign as king, Richard III tried to institute financial reforms and clean up corruption in the royal court. He also provided for King Edward IV’s widow Elizabeth and her daughters.

So... How did King Richard III’s grave become lost to history?

Richard III’s dead body was put on display in Leicester, but his burial site was shrouded in mystery. It was rumored that his body was dumped into a pit dug into the floor of a local church – the church of the ‘Greyfriars’ (friars wearing robes of grey). But during the religious turmoil of the 1500’s, Greyfriar’s church was destroyed. Stories circulated that Richard III's body had been dug up and thrown into a river.

How was his grave discovered?
Fast Forward to the year 2004...

"I just felt I was walking on Richard III's grave," said Philippa Langley, a writer from Edinburgh. One day, while walking around the city of Leicester, she was struck by a sudden bolt of supernatural intuition about the location of Richard’s grave. 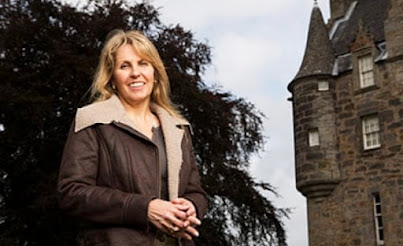 For years, Philippa Langley had been researching the life of King Richard III, because she felt his life would make an interesting screenplay. But as she dug deeper into the historical facts about him, she became convinced he had been unfairly maligned. She decided she might gain additional insight into his character by walking the streets of Leicester, the last city King Richard III visited before dying in battle.

Philippa headed to a parking lot on New Street, bordered by the ruin of a medieval wall that was believed to be the site of Greyfriar’s priory. When she turned to leave, she felt compelled to enter the gated parking lot across the street. As she stood on a parking space near the red brick wall at the far end of the lot, a cold sensation penetrated her body, and chill bumps rose on her skin. She felt sure she was standing on Richard III's grave. A year later Philippa returned to that parking lot, to see if she still felt that same eerie sensation. She was surprised to find that someone had painted a large “R” on that parking space, to mark it Reserved. She took the painted "R" as a cosmic sign to investigate further.

Over the next seven years, Philippa worked hard, and with the aid of the Richard III Society, she raised £34,000 to conduct an archaeological dig at the site. She obtained a permit to dig from the Leicester City Council and enlisted the expertise of archaeologist Richard Buckley from the University of Leicester. He was eager to locate the site of Greyfriar’s church, but he had his doubts about finding Richard III’s grave. 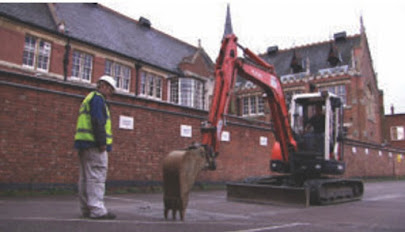 Excavating the parking lot (University of Leicester)
In August 2012, the dig began. The first bits of stonework were identified as remnants of a Victorian outhouse. But then... five feet down, they found two long human leg bones, along with fragments of stained glass and medieval stonework.

They obtained a permit to exhume human remains in September 2012, and then unearthed the skeleton. Carbon dating corresponded to the time Richard III died. DNA was extracted and compared with a living descendant of Richard III’s sister—a cabinet-maker in London named Michael Ibsen. His DNA was a perfect match with the skeleton!

The spine wasn’t curved like a hunchback, but it was curved slightly sideways, as in scoliosis. The arm bones were straight, as were the legs, disproving the myths that Richard III had a withered arm and walked with a limp. 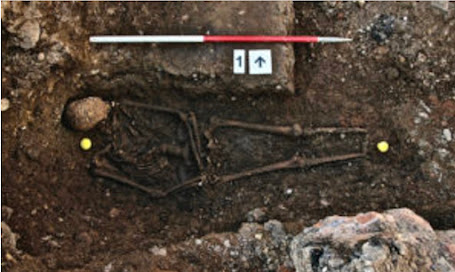 The skeleton discovered (University of Leicester)

Death was caused by blows to the skull, likely made from a halberd (medieval battle axe). 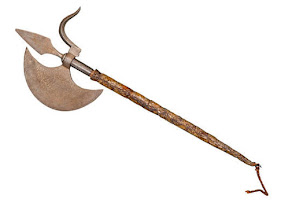 Halberd - British Battle Axe (Public Domain)
A digital artist worked with life-size 3-D scans of the skull to do a facial reconstruction, adding skin, hair and eye color. The finished result is a close likeness to the portrait of Richard III in the National Portrait Gallery. 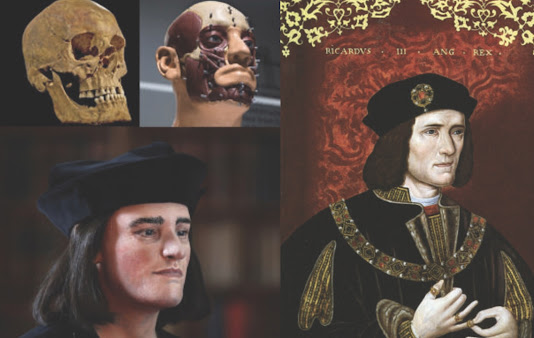 In 2015, King Richard III was given an honorable reburial at Leicester Cathedral, in a coffin made by Michael Ibsen, his seventeenth-generation nephew. 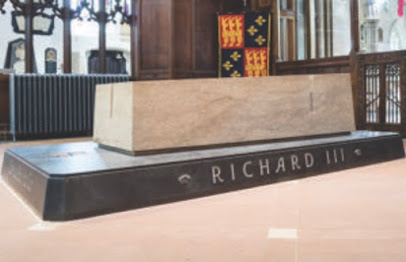 Philippa Langley has co-written a book and has participated in TV projects about the discovery of Richard III’s grave. She still plans to have her screenplay about Richard III made into a film.

The discovery of King Richard III’s skeleton disproved the legend that his body was dug up and thrown into a river, as well as the myth that he had a grossly deformed physical appearance. I wonder... how many stories about his villainous behavior are also untrue?

_____________
Mary Dodge Allen is the winner of the 2022 Christian Indie Award from the Christian Indie Publisher's Association, and two Royal Palm Literary Awards from the Florida Writer's Association. She and her husband live in Central Florida, where she has served as a volunteer with the local police department. Her childhood in Minnesota, land of 10,000 lakes, sparked her lifelong love of the outdoors. She has worked as a Teacher, Counselor and Social Worker. Her quirky sense of humor is energized by a passion for coffee and chocolate. She is a member of the Florida Writer's Association, American Christian Fiction Writers and Faith Hope and Love Christian Writers.
Website: www.marydodgeallen.com 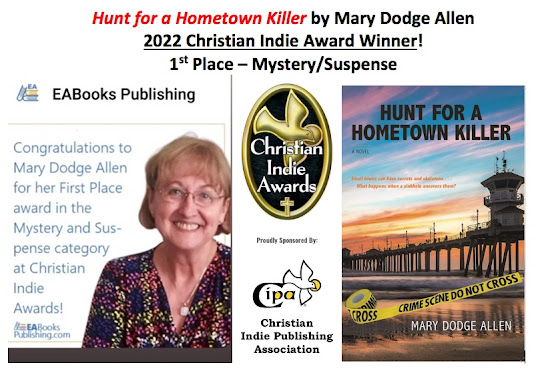