On April 19, 1775, in the shadowed mist of a new dawn, a group of fifty men consisting of farmers and merchants, ill equipped and untrained, awaited the British regiment at Lexington Green in Massachusetts.

The surprised British officer didn’t take them seriously. He ordered the farmers and merchants to, “Lay down your arms and go back to your homes!” 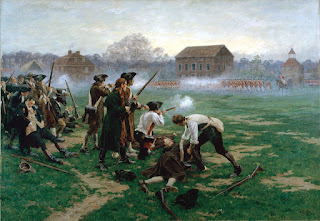 Captain Parker, leader of the minutemen, yelled to his men, “Don’t fire unless fired upon. If they mean to have war, let it begin here!”

At Concord, Massachusetts, a larger force of minutemen waited. Every bullet must count. There was no turning back now. The scantly armed minutemen turned the British on their heels, peppering their back with buckshot, their red coattails fluttering behind them in shocked retreat as they fled across the old North Bridge and over the Concord River.

On July 4, 1776, our framers drew up The Declaration of Independence, placing their fate and the lives of the Colonists in the hands of God with these immortal words (highlighted):

“WE hold these Truths to be self-evident, that all Men are created equal, that they are endowed by their Creator with certain unalienable Rights, which among these are Life, Liberty, and the pursuit of Happiness…

“We, therefore, the Representatives of the united States of America, in General Congress, Assembled, appealing to the Supreme Judge of the World for the Rectitude of our Intentions, do, in the Name, and by Authority of the good People of these Colonies, solemnly Publish and Declare, That these United Colonies are, and of Right ought to be Free and Independent States; that they are absolved from all Allegiance to the British Crown, and that all political Connection between them and the State of Great-Britain, is and ought to be totally dissolved; and that as Free and Independent States, they have full Power to levy War, conclude Peace, contract Alliances, establish Commerce, and to do all other Acts and Things which Independent States may of right do.—And for the support of this Declaration, with firm Reliance on the Protection of divine Providence, we mutually pledge to each other our Lives, our Fortunes, and our sacred Honor.” 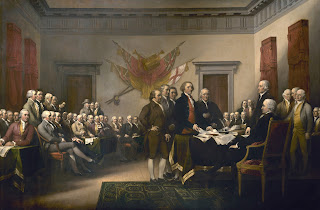 Independent states with the authority to govern themselves. All bound to a common cause—to uphold the nation’s rights of free, God-fearing men. Three times the founders boldly claimed their allegiance to God. Three times they proclaimed their faith, hope, and love, believing in the Supreme Judge of the World, the Triune God, appealing to His Almighty Greatness to guide them through the uncharted waters never navigated by human hands before.

John Winthrop’s vision inspired from Matthew 5:14,16 was a pen stroke away from happening. “A city that is set on a hill cannot be hidden…Let your light so shine before men, that they may see your good works and glorify your Father in heaven.”

The bloody seven-year war concluded on September 3, 1783. Victory came at a high price—6,800 Americans were killed in action, 6,150 were wounded, 20,000 were taken prisoner, and an unimaginable amount of men died from illness and bullet wounds.

In our Capitol, just off the rotunda, is a room always open to members of Congress, the focal point of which is a stained-glass window showing George Washington kneeling in prayer with the words of Psalm 16:1, “Preserve me, O God, for in thee do I put my trust” (KJV). The immortal words of Thomas Jefferson, in “A Bill for Establishing Religious Freedom,” Section 13, that inspired our First Amendment are written below:

“Well aware that the opinions and belief of men depend not on their own will, but follow involuntarily the evidence proposed to their minds; that Almighty God hath created the mind free, and manifested his supreme will that free it shall remain by making it altogether insusceptible of restraint; that all attempts to influence it by temporal punishments, or burthens, or by civil incapacitations, tend only to beget habits of hypocrisy and meanness, and are a departure from the plan of the holy author of our religion.”-

When our founders placed God as the nation’s Supreme Judge, they were aware there would be no pretext of naiveté. Any violation of God’s commandments would be willfully committed.

Every immigrant seeking citizenship receives this message from the Director U.S. Citizenship and Immigration Services: 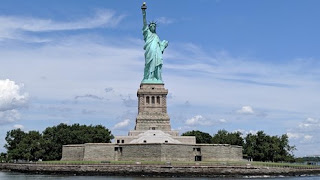 “Make no mistake, we have been presented with a timeless framework for self-government, but in order to preserve this wonderful gift, we must hold these principles close to our hearts. I encourage you to read and understand these documents. I promise you will be nothing short of inspired.”

On the Jefferson Memorial in Washington D. is inscribed: “God who gave us life gave us liberty. Can the liberties of a nation be secure when we have removed a conviction that these liberties are the gift of God? Indeed I tremble for my country when I reflect that God is just, that his justice cannot sleep forever.”

A new dawn, a new nation, and a humble appeal to the Supreme Judge of the world—the course of the United States of America was set. It’s up to each generation to keep these principles alive.

Without leaving your home, take a thrilling journey through the momentous pages of history. From the romantic Antebellum Era to the unforgettable Civil War; from the Gibson Era to Roosevelt’s Rough Riders; from the War to End All Wars and the Roaring Twenties, to the Great Depression; from the Big Band Era to fighting alongside the heroic men of World War II. Sprinkled with true-to-life romance, these award-winning books will inspire all ages and make wonderful birthday and Christmas gifts! 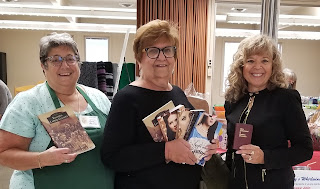 An award-winning author, Catherine's inspirational historical romances include Wilted Dandelions, and her faith-based Destiny series Swept into Destiny, Destiny’s Whirlwind, Destiny of Heart, and Waltz with Destiny. She lives with her husband of 50 years and their Arabian horses in Addison Township, Michigan.