By Rebecca May Davie 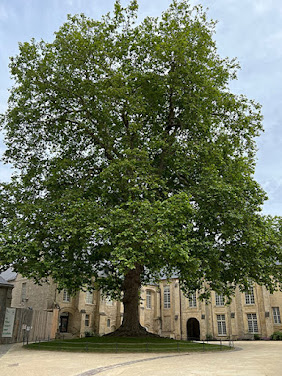 The last two posts were about Trail Trees that give directions to important locations: Part 1 and Part 2. This time the discussion centers around trees that point toward freedom.
This spring as I planned for a trip to Europe with a fellow writer, I read about the “Liberty Tree” in Bayeux, France. Of course, I wanted to see it in person. It did not disappoint! The French planted “Un Platane,” an American Sycamore tree, in 1797. It is still thriving 225 years later. Opposing parties cut down or destroyed other Liberty Trees; so it is amazing that this magnificent tree survived. 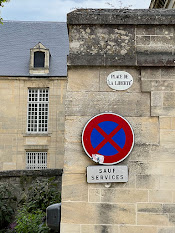 If the individuals who placed this tree in the ground could see
what is transpiring this summer of 2022, they would be in awe. First, the tree lives. Second, colorful light displays like holograms flash over the bark and across the leaves to celebrate peace. In the Place de la Liberté Square and upon the cathedral, spectators can view the show from nightfall through midnight. 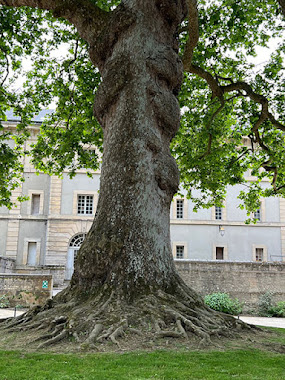 Why did the French plant this tree? The French revolutionary government decided upon the symbol of Liberty Trees in 1792, based upon the American tradition. Many small trees were placed in Bayeux. This sole remaining Liberty Tree supplanted all others in 1797.
After returning from Europe, I visited Virginia with my family in July. While there, I read about a Liberty Tree at the American Revolution Museum at Yorktown. This 17-foot metal fabrication stands in celebration of the symbol. Twenty hanging lanterns display messages. View the images and a description on their website. While investigating, you can post a message on one of the lanterns of the tree. There is also a map of displayed messages from visitors across the globe.
What or who inspired this symbolic movement? How did it come about? Below, read a timeline of America’s first Liberty Tree in Boston, Massachusetts:

1664 – Individuals planted an elm on Orange Street in direct opposition of British rule. The settlers wanted to separate from the oppressors and rule themselves.

1765 – August, an effigy hung from the tree in opposition to the Stamp Act (passed by the British Parliament in March).

People posted notices and complaints on the tree. They gathered below the branches to discuss the state of events.

During the American Revolution there was violence, mobs, tar-and-feathers, and other demonstrations. A town meeting resulted in a vote against the violence. After, a copper plate affixed there stated, “Liberty Tree.”

1766 – Lanterns hung in the tree to celebrate the repealing of the Stamp Act.

Around Liberty Trees Americans plotted, planned, and protested in resistance to British rule. Other cities and communities installed Liberty Trees as the stories spread. As you read above, another country also adopted the symbol.

For more information, read: The Story Behind a Forgotten Symbol of the American Revolution: The Liberty Tree.

As a child, Rebecca loved to write. She nurtured this skill as an educator
and later as an editor for an online magazine. Rebecca then joined the Cru Ministry - NBS2GO/Neighbor Bible Studies 2GO, at its inception. She serves as the YouVersion Content Creator, with over 75 Plans on the Bible.com app.

Rebecca lives in the mountains with her husband, the youngest of their two sons, and a rescued dog named Ranger. If it were up to her, she would be traveling - right now. As a member of ACFW, FHLCW, Jerry’s Guild, and Hope*Writers, Rebecca learns the craft of fiction while networking with a host of generous writers. She is working on her first fiction novel. This story unfolds from the 1830s in Northern Georgia.
Connect with Rebecca:
Clubhouse Facebook Goodreads Instagram Pinterest Twitter Website 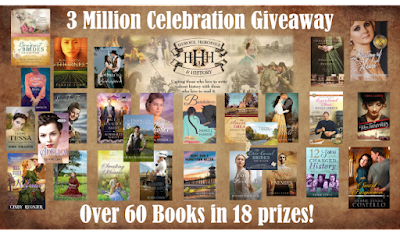 To celebrate reaching 3 Million views, HHH is hosting a HUGE giveaway of over 60 books in 18 prizes, so there are many chances to win! One grand prize will consist of 10 books, two readers will win a second prize containing 5 books, and there will be 15 winners of a third prize containing 3 books each. There are several ways to earn entries, such as following, or commenting on the HHH blog each day. Thank you for being part of the HHH community, and best wishes in the giveaway!
Posted by Rebecca Davie at 12:00 AM