In my blog post last month, we explored the origins of the Pony Express. You can read it here if you missed it: https://www.hhhistory.com/2022/07/origins-of-pony-express-by-donna.html This time around, we’ll look at what caused the Pony Express to close, and then I’ll share some things about the business you might not have known.

Most sources say that technological advancement killed the Pony Express. The transcontinental telegraph was completed in October 1861, and served as the immediate cause of the closure of the delivery service.

However, Russell, Majors and Waddell knew from the beginning that the telegraph was going to be built, and knew that its completion would negatively impact their business. In fact, about ten weeks after the Express began, Congress authorized the Secretary of the Treasury to subsidize the building of the telegraph line across the country. Still, it didn’t mean its immediate dissolution. The telegraph was much like the first interstate in that it ran a relatively straight line across the country. It didn’t, however, serve any cities or towns off the main line for months and years later. Which meant that those towns and cities needed a system of getting telegrams from the main line. The funny thing is, many parts of the West lay claim to being a Pony Express home station that were never on the original line. I found one several years ago at a trading post in the Superstition Mountains in Arizona.

The point is, the telegraph wasn’t the only reason the Pony Express closed. There were others, not quite as large in scope, but still were factors in the business’s demise. 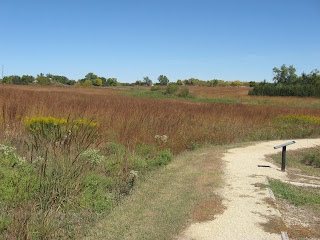 Wagon trail used by Pony Express, Hollenberg, KS
The parent company was in dire financial condition. The partners lost a lot of money when a large wagon train pulled by oxen froze to death in Nevada in a blizzard, resulting in the loss of dozens of animals as well as thousands of dollars worth of supplies. Native uprisings and attacks on stations in the west and the east caused problems. The company lost many stations to Indians and outlaws. Station keepers were killed or run off, and horses and equipment were stolen.

Internal problems cropped up between the company’s founders because of a difference in vision for the future of the business.

But a primary factor was that the general public didn’t use the Pony Express as hoped. At a cost of five dollars per ounce, only important missives made the trip, including the announcement of Abraham Lincoln’s re-election in November 1860. Even when they reduced the price to one dollar per ounce, ordinary people couldn’t afford the cost. They chose to send letters with others heading the direction of the recipient (needless to say, most were never delivered), or if the letter was going to the West Coast, they mailed it with a competing company that sailed it down around the Horn and back up the west coast.

In October 1860, a full year before the official end of the Express, Russell had already begun selling off assets to satisfy creditors. But still the Pony Express floundered forward, losing an estimated thirteen dollars on every letter delivered. When the Express ended, Majors sold all he owned to pay the creditors and establish his own small freighting company, which also failed.

The fact of the matter is that the government was looking for a way to keep the country united. There was a lot of ground between Missouri and California that wasn’t officially part of the United States, and with the very important election of 1860, Washington DC wanted to make sure folks in the West felt like they were part of what was going on in the East. Talk of secession was already abounding in California.

Russell, Majors, and Waddell had no such patriotic interests in the creation of the Express. They hoped to be awarded the US Postal Service mail contract to deliver mail between Missouri and California. Their competitors, the Butterfield Overland Mail Company, operated a southern route that took at least a week longer, or the three-month option of the sailing ship.

In the end, after the Express dissolved into bankruptcy, the government stepped in and combined both companies, with the original express delivering from St. Joseph, Missouri to Salt Lake City, Utah, and Butterfield taking over from Salt Lake to Sacramento, California.


Ten things you might not know about the Pony Express:

1. The Pony Express cut mailing time from twenty-five days on the southern route, or months on a sailing ship, to ten days.

3. Pony Express riders had to weigh between 100 and 125 pounds to keep the pony’s load as light as possible. Jockey-size.

4. Riders swore a loyalty oath to the Express, and promise not to cuss, drink alcohol, and not fight with other riders. They also swore they would be honest, faithful to their duties, and win the confidence of their employers.

5. A specially designed mailbag, or mochila, was designed to slip on over the saddle, and then the rider sat on it to keep it in place. When changing horses, the rider simply lifted the mochila off and slapped it onto the next mount. Three locked pockets contained mail, the fourth the rider’s time card. Only station keepers had a key. Up to 20 pounds of cargo were carried on each ride.

6. As discussed in this blog post, ordinary people couldn’t afford to use the Express. The $5 original cost works out to about $130 in today’s money.

7. The longest ride by a single rider was completed by Bob Haslam in May 1860. He made his usual 75-mile ride from Friday’s Station to Buckland Station, Nevada. However, his relief rider wouldn’t venture out because of Native activity, so he continued, eventually completing 190 miles that day. He rested a bit, hopped on a new mount, and headed home to Friday’s Station, passing a burned out station. He traveled 380 miles in less than 40 hours.

8. Riders dealt with extreme weather conditions, hard terrain, and occasional threats from Natives and bandits, but the stock keepers and station keepers had the more dangerous work.

9. Buffalo Bill Cody probably wasn’t an Express rider, although he laid claim to having been one in his autobiography. He did keep the memory of the Pony Express alive in his Wild West show from 1883 to 1916.

10. The transcontinental telegraph dealt the death blow to the Express, but other factors would likely have brought the service to halt within the next year.

Giveaway: Leave a comment, and I’ll draw randomly for a winner to receive either a print (US only) or ebook copy of Hollow Hearts, Book 2 in the “Hearts of the Pony Express” series. Please remember to cleverly disguise your email address like this: Donna AT livebytheword DOT com

Middle-aged widow Edith Cooper walks away from the cemetery along the Green River near Simpson’s Hollow, Utah Territory. Away from the husband buried there this morning. Away from their plans and dreams for their future. Along the way, two men offer their hand in marriage. For her protection, one says. For his children’s sake, says the second. Were any of these reasons enough to marry? She must choose one. But which?

Albert Whitt, stationmaster of the Pony Express Station, loves his independent life. Twice stood up by women, he takes the only course that ensures no more rejection: stay clear of them. But when he learns that the stoic Widow Cooper is considering two proposals from men not worthy of lacing her boots, he must do something. But what?

Can Edith and Albert find a new beginning in the midst of tragedy, or will they choose the most convenient path—alone?

A hybrid author, Donna writes squeaky clean historical and contemporary suspense. She has been published more than 50 times in books; is a member of several writers groups; facilitates a critique group; teaches writing classes; ghostwrites; edits professionally; and judges in writing contests. She loves history and research, traveling extensively for both, and is an avid oil painter.