Gertrude Ederle - The First Woman to Swim the English Channel 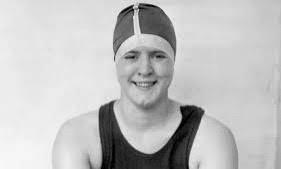 Gertrude Ederle (Public Domain)
In 1925, nobody believed a woman could swim the treacherous and stormy English Channel. At that time, only five men had accomplished this feat:

She was born on October 23, 1905, the third of six children. Her parents Anna and Henry Ederle were German immigrants. Her father, a Manhattan butcher, purchased a summer cottage at the Jersey shore, where Gertrude learned to swim. When she became a member of the Women’s Swimming Association as a young teenager, she learned a streamlined, eight-beat version of freestyle swimming called the American crawl (based on the original Australian crawl).
From 1921 to 1925, Gertrude set 29 U.S. and world amateur records for swimming. In 1922, she set seven records in a single day at Brighton Beach, New York. 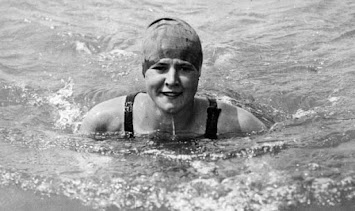 Gertrude at swim practice (Public Domain)
In the 1924 Paris Olympics, Gertrude won a gold medal as part of the 400-meter freestyle relay team, and she won two bronze medals in the individual 100-meter and 400-meter freestyle events. She had been favored to win gold medals in these individual events, and the bronze medals were a disappointment. But Gertrude had won these medals while swimming with an injured knee, and she and the other U.S. women athletes were also suffering from fatigue, after traveling six hours each way to the Olympic event center for daily practice sessions and events. The U.S. officials had housed them in hotels far from the city because they didn’t want the women corrupted by the bohemian lifestyle in central Paris.
While at the Paris Olympics in 1924, Gertrude was inspired to swim the English Channel. She began an intensive training program with swim coach Jabez Wolffe, who had made 22 previous attempts to swim the channel. In June 1925 she was the first woman to swim from Manhattan’s Battery Park to Sandy Hook, New Jersey in 7 hours, 11 minutes, breaking the men’s record. 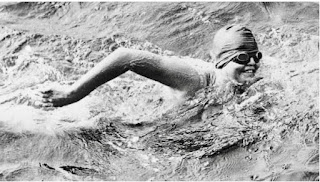 Gertrude practice swimming in the English Channel (Getty Images)
In August 1925 at the age of 19, Gertrude Ederle attempted to swim the English Channel. But after swimming 23 miles in 8 hours and 46 minutes, Gertrude was hastily retrieved from the water because her swim coach Wolffe, who was in the support boat accompanying her, was afraid she was drowning in the large swells. Gertrude was livid when her attempt was cut short. She insisted she had simply been resting while floating in the waves.

Gertrude was determined to try again. She began training with a new swim coach – Bill Burgess, who had successfully completed the channel swim in 1911. 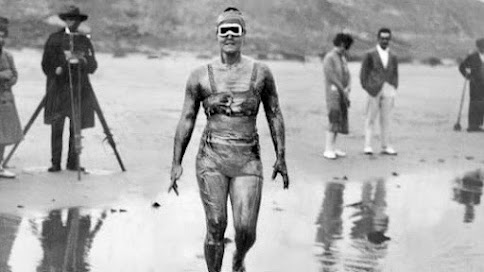 Gertrude beginning her second English Channel swim (Getty Images)
On August 6, 1926 at 7:08 a.m. Gertrude entered the English Channel at Cape Gris-Nez, France. She was now 20 years old, and much better prepared for the swim. In her first attempt, she had worn the traditional heavy wool one-piece bathing suit, which dragged in the water and rubbed against her skin. This time, she wore a lightweight, yet modest two-piece suit that she had designed with the help of her sister Meg. Gertrude donned motorcycle goggles to keep salt water out of her eyes and pulled a snug pink swim cap over her hair. She also slathered her body with sheep grease to insulate her body from the frigid water and protect her skin from jellyfish stings. Small craft warnings had been posted that morning, and the channel surface looked choppy. Gertrude prayed, “Please, God, help me.”

A number of family, friends and a few select reporters rode in the support boat alongside her, including her father Henry, her sister Meg and her coach Bill Burgess. The boat was stocked with soup, chicken legs and oranges to sustain her while swimming. A second boat also followed her, packed with other reporters.
Wireless machines on the boats allowed reporters to send frequent updates on her progress. It was an early ‘play-by-play’ athletic event.

As an incentive, Gertrude’s father had promised her a brand-new red roadster if she completed the swim. While she was swimming, people in her support boat held up encouraging signs like, “One wheel” or “Two wheels” to indicate how close she was getting to winning the roadster. Gertrude often sang, “Let Me Call You Sweetheart” with the beat of her swimming strokes, to maintain her pace.

During the twelfth hour of her swim, the channel’s unfavorable winds grew stronger, stirring up the waves. Bill Burgess feared for her safety. When he urged Gertrude to come out, she shouted back, “What for?” and kept on swimming.

By 9:00 p.m., lights from the boats accompanying her became visible from the English shoreline. As Gertrude swam toward Kingsdown, England, a huge crowd gathered on the beach and built bonfires to guide her. Loud cheers rang out as she finished her swim and walked ashore in the rough surf. She refused all offers of assistance from people who had waded out to meet her, even though she was exhausted, and her face was swollen and bruised from the battering of rough waves. As the crowd continued cheering, a British immigration officer met Gertrude on shore and requested her passport... with a grin.

Gertrude had completed the swim in 14 hours, 31 minutes! She was the first woman to swim the English Channel, and she’d also beaten the previous record by over two hours!
Gertrude was later quoted as saying, “I knew it could be done, it had to be done, and I did it.” Her accomplishment made a lasting contribution to women’s athletics. The next four swimmers who successfully completed the channel swim were all women. Gertrude’s record time wasn’t broken until twenty-five years later, when Winnie Roach-Leuszler beat her by an hour in 1951. 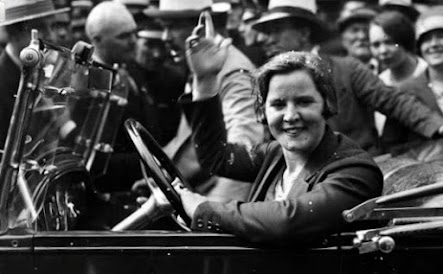 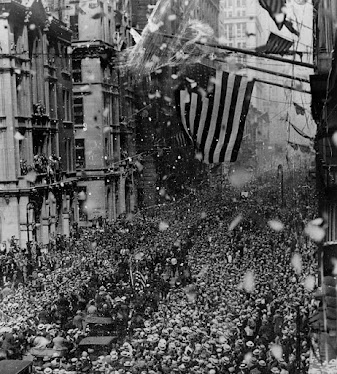 Gertrude was welcomed back to New York City, where she was given a huge ticker-tape parade on August 27, 1926. Calvin Coolidge later invited her to the White House and called her “America’s best girl.” The press treated her like a celebrity, and marriage proposals arrived in the mail every day.

But Gertrude’s fame was soon overshadowed by Charles Lindberg in May 1927, when he became the first person to fly an airplane across the Atlantic Ocean.

Gertrude Ederle joined a touring vaudeville act and even made a short Hollywood movie about herself. But after a few years, she quit the vaudeville tour because she was going deaf. She had suffered a hearing loss at the age of five after contracting measles, and swimming in the salt water of the English Channel had worsened her hearing. Then in 1933, Gertrude was severely injured when she fell down a stairway in her apartment building. Her back was in a cast for four years. But by 1939, she had recovered enough to appear in Billy Rose’s Aquacade at the New York World’s Fair.

Despite receiving many marriage proposals, Gertrude remained single. She had one romance which almost resulted in an engagement, but the relationship fell apart because of her increasing deafness. For many years in her later life, she taught children’s swimming lessons at the Lexington School for the Deaf in New York. She died on November 30, 2003 at the age of 98.

Gertrude was regularly interviewed by the press on the anniversaries of her record-breaking channel swim. In one of her later interviews, she said, “I have no complaints. I am comfortable and satisfied. I am not a person who reaches for the moon as long as I have the stars.” 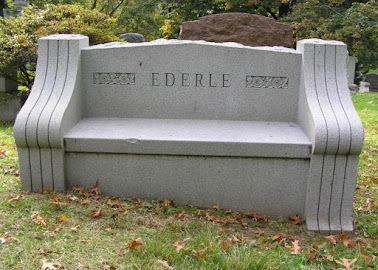 Gertrude Ederle's grave, Woodlawn Cemetery, New York City (Public Domain)
_____________
Mary Dodge Allen is the winner of the 2022 Christian Indie Award from the Christian Indie Publisher's Association, and two Royal Palm Literary Awards from the Florida Writer's Association. She and her husband live in Central Florida, where she has served as a volunteer with the local police department. Her childhood in Minnesota, land of 10,000 lakes, sparked her lifelong love of the outdoors. She has worked as a Teacher, Counselor and Social Worker. Her quirky sense of humor is energized by a passion for coffee and chocolate. She is a member of the Florida Writer's Association, American Christian Fiction Writers and Faith Hope and Love Christian Writers.
Website: www.marydodgeallen.com 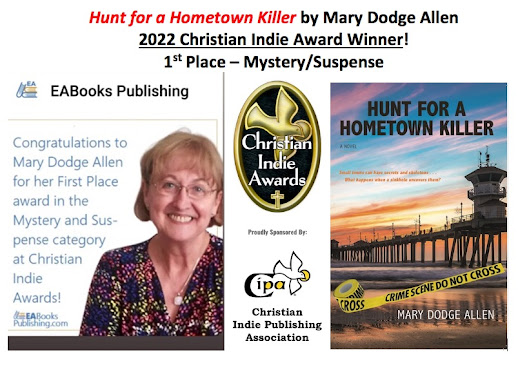