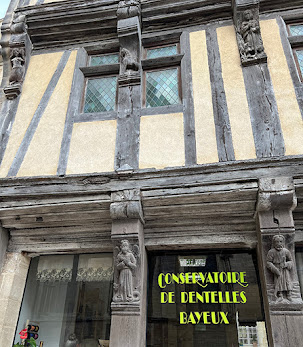 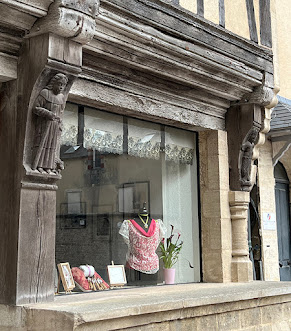 I visited the Lace Conservatory in Bayeux with a writing colleague during our research trip this summer. Founded in 1988, Le Conservatoire Dentelle de Bayeux moved to its current location within La Maison d’Adam et Eve in 2001. The building dates to the 15th century. To think of all the people passing by or occupying this space since the 1400s is intriguing. Restoration of the ground floor occurred in 1976. Look at the carvings of Adam and the angel with the serpent that appeared that same year.
Bayeux is in the Normandy region of France. Normandy lace derived from these cities : Alençon, Argentan, Bayeux, Caen, Courseulles, La Perrière, and Villedieu les Poêles. This lace consists of linen, silk, and then cotton in the later years. They also used cotton in times when materials were difficult to obtain. 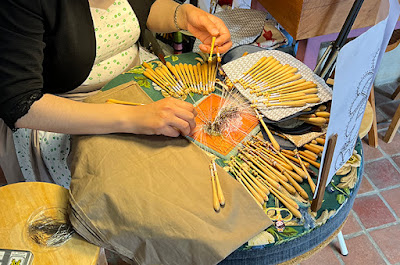 Bobbin lace was the primary form of Bayeux lace until the late 17th century, although they also made needle lace. At the end of the century there were three factories in Bayeux. Lace making continued through the 1800s. Noteworthy lace such as Chantilly, reigned during this time. By the mid-20th century, the only lace in production was from a school. 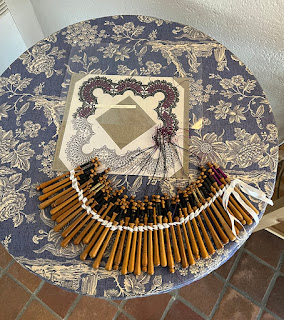 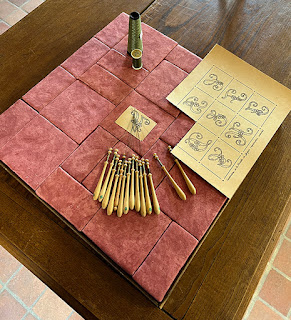 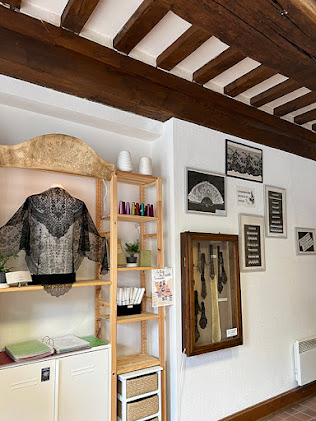 This Conservatory exists due to a 1901 law seeking to reignite interest in Norman lace. The association creates bobbin lace and needle lace to this day. Notice the photos of samples. Classes are available for those living in the area who would like to learn the trade. For visitors, intensive internships are available. There is a store onsite to purchase pieces such as doilies, bookmarks, bracelets, and earrings. The last photo shows a bracelet I bought for my mom.
I asked how long it took to create the pieces in the shop. My estimation based on what the artist stated is around 30 hours per inch. Depending upon the complexity, the time could be longer. Consider this labor the next time you see a vintage photo of a woman with clothing adorned in lace. The years invested in one dress is astonishing. 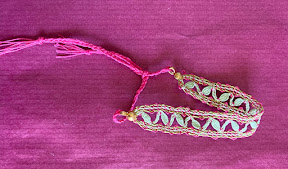 Louis XIV comes to mind. Can you imagine how many lacemakers were employed to outfit the court? Add to that the realization that each member changed clothing several times per day. In current times, machines design lace in a fraction of the time. Nothing can compare to the lovely lace woven by hand. This is awe-inspiring Art!

As a child, Rebecca loved to write. She nurtured this skill as an educator and later as an editor for an online magazine. Rebecca then joined the Cru Ministry - NBS2GO/Neighbor Bible Studies 2GO, at its inception. She serves as the YouVersion Content Creator, with over 75 Plans on the Bible.com app.
Rebecca lives in the mountains with her husband, the youngest of their two sons, and a rescued dog named Ranger. If it were up to her, she would be traveling - right now. As a member of ACFW, FHLCW, Jerry’s Guild, and Hope*Writers, Rebecca learns the craft of fiction while networking with a host of generous writers. She is working on her first fiction novel. This story unfolds from the 1830s in Northern Georgia.