"Who would ever want to use one?" ~ Tidbits of Telephone History

A question that has entered my peripheral research time and again centers around whether or not my characters’ households would own a telephone. Given the era of the story, that might seem like a no-brainer, but actually it is a question never easily answered. The biggest factors for each story depend upon locales. Are settings urban or rural? In well-off households or less so? Where did the lines run and how far out did they reach during the years in which my story takes place? What was the rate of home phone ownership there at that time? Would it have been likely that this character would have owned such a resource?

Ah, such rabbit trails! There’s a little wiggle room of course, but not much in my desire for historical and story accuracy. 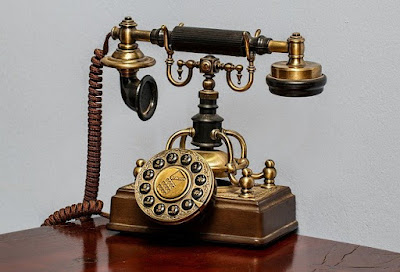 I’m asking myself that question in another work-in-progress today. Would these people, in this small town, have their own telephone, or would they have to go to another place to use a public telephone? At the workplace or a nearby store perhaps. I continue my quest to be sure. In the process, I uncover some interesting historical tidbits about the telephone that drew a grin:
In 1876, when President Rutherford B. Hayes examined the telephone for the first time, he said to Alexander Graham Bell: “That’s an amazing invention, but who would ever want to use one of them?” (I suppose some of us still feel that way.)
The same year, as Bell struggled with his company, he offered to sell the patent to Western Union for $100,000 and was roundly turned down. Western Union’s reply:

“We do not see that this device will be ever capable of sending recognizable speech over a distance of several miles. Messer Hubbard and Bell want to install one of their ‘telephone devices’ in every city. The idea is idiotic on the face of it. Furthermore, why would any person want to use this ungainly and impractical device when he can send a messenger to the telegraph office and have a clear written message sent to any large city in the United States? … Mr. G.G. Hubbard’s fanciful predictions, while they sound rosy, are based on wild-eyed imagination and lack of understanding of the technical and economic facts of the situation, and a posture of ignoring the obvious limitations of his device, which is hardly more than a toy … This device is inherently of no use to us. We do not recommend its purchase.”

I bet bet they regretted that decision for a long, long time.

Over in Britain, they thought the device might be useful to Americans because we lacked domestic servants, while in that country, there was a “superabundance of messengers, errand boys and things of that kind.” (Ah. . .servants. What a novelty.)
Engineers and visionaries saw it differently. They looked to the future of the telephone a lot like we view space travel today. I presume that's what G.G. Hubbard's "fanciful predictions" seemed like.
When we view the telephone in light of the past, it’s easy to see how the general public had the same hesitancies about the new device as we’ve had about the internet and our various "smart" technologies today. There were concerns about invasion of privacy back then too—a very real concern with having to use the telephone in a public place. Then, once lines were brought house to house, there was the invasion of eavesdroppers over the shared lines. Even the telephone operators were privy to more private conversations than was probably fit for public consumption.
"AHOY!"
Nowadays we have voice mail to collect our phone calls and some of us still use answering machines to screen our calls. We can leave greetings on them for when the phone picks up. But what about that first, "Hello, Musches"? It was Thomas Edison who suggested we say hello when picking up a ringing phone. Bell's suggestion that we answer with a smart, "Ahoy" never caught on. (I might have to try that sometime.)
Telephone use became common to nearly everyone during the first half of the 1900s (though I still have that conundrum of how far lines reached and when). In 1946, Bell's company hired 250,000 women as switchboard operators for both public and business services. 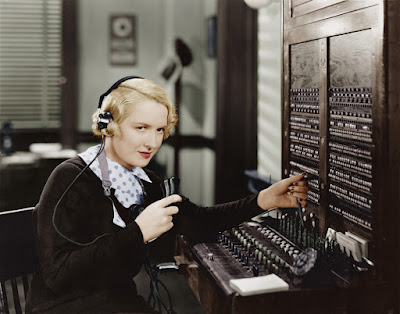 They say President Lyndon Johnson's preferred method of handling white house communications and accomplishing most presidential work was the telephone, and he used it profusely. In fact, when he took office after President Kennedy's death, he had phones installed in so many places around the white house, he could literally move from phone to phone like a relay system, continuing conversations while going about his tasks. There were phones on coffee tables, in bathrooms, and on window sills. Even a phone beneath both the dinner table and the hammock. Not only did he prefer working by telephone, but LBJ is known to have secretly taped at least 9000 of his conversations😮. He used the transcripts to review his daily work. 6000 of them are available through the Miller Center at the University of Virginia. 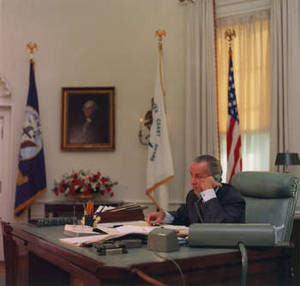 Another fun bit of history is the ring system. Nowadays, we select a tone we want to hear when our cell phone rings. We can pick jazzy music or funny movie lines. Back in the early days of home phones and the party line, individual households had their home's ring pattern to help them know if the call was for their house or for another family on their line. It might be two short rings followed by two long, or one long and three short, and so on. I'm old enough to remember when my grandparents and our family got a "private line".

Now we're back to wondering who might be listening in. Not because of party lines of course, but because of concerns we have about Big Brother. 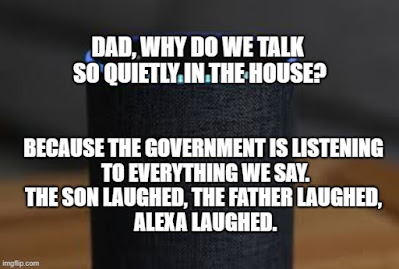 What foreseeable changes do you think are coming to our ways of communicating? Will you welcome them, or do you abhor the notions?
Do you have a favorite read featuring old telephone systems or characters who are switchboard operators? One of my favorites lately is Candice Patterson's Saving Mrs. Roosevelt, in which Coast Guard characters include switchboard operators and spies on the home front during WWII.

There are a host of terrific Christian novels out there featuring switchboard operators. I had fun in my novel The Love Coward involving an off-scene operator who had the habit of spreading bits of gossip she'd overheard on the line, but she could be very helpful too.
Do you find yourself ever being nostalgic about those old telephone days when we were still attached to the wall instead of the computer? So many useful storylines remain to be written! I still crack up when Oliver Wendell Douglas has to climb the telephone pole to answer the telephone on Green Acres.
One of the richest blessings I've had lately regarding modern telephone technology happened only this morning as I was writing this post. A reader looked me up and gave me a call. She had stumbled upon Season of My Enemy at her library, and because of some connections she had to a town I mentioned in the book, she decided to search me out. Surprisingly, once she found me online, she discovered we had some close ties through my immediate family, so she rang me. We had a lovely time acquainting ourselves. I so appreciated the technology that brought that about!
Researching tidbits of telephone history has kept me hopping with several of my books. Here are a few titles where that research has played out.