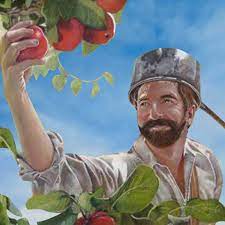 Maybe you first learned about him in elementary school or maybe you’ve seen an animated movie produced by Disney in 1948 about him.
The real Johnny Appleseed, actually named John Chapman was no fairy tale, but several myths about this remarkable man do exist and are commonly believed. Let’s find out about the real John Chapman and why we remember him today. 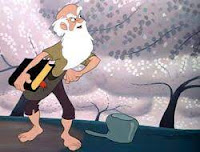 John Chapman was born, on September 26, 1774, in Leominster, Massachusetts. Not much is known about his early years, but by the turn of the century as the American frontier was moving westward, John became a familiar figure. In some areas in the days of homesteading, settlers must plant 50 apple trees and 20 peach trees in three years to prove up on their claim. Chapman recognized a business opportunity in this requirement and set about to make it happen.

His plan was to plant apple tree nurseries or orchards, them sell them for profit to those wanting to homestead, and thus was born the legend of Johnny Appleseed. From Pennsylvania to Illinois, John would go ahead of the settlers, planting fruit trees. He probably actually did carry a bag of apple seeds along in his travels, seeds he got for free from cider mills, but contrary to popular opinion, he did not scatter them wherever seemed a good spot for an apple tree. He cultivated small plots of land that he purchased at reduced prices, planted his apple trees from seed, then would leave them in care of a person living nearby. He would come back every year or two to tend his orchards, selling entire plots at a time to settlers or selling individual trees to them, all at a hefty profit. 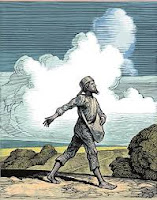 Chapman was a religious man, seeing himself as a missionary of sorts, In his travels he would stop at homes along the way and share his beliefs with those he met. He was also a great storyteller and accepted meals or an occasional night under a roof in payment for his stories. He was a member of the Swedenborgian Church, a Christian belief system most of us would find very odd today. For instance, he planted everything from seed as the religion forbade grafting, believing it caused the plants to suffer. He also believed all animals must be treated with kindness, even mosquitoes and rattlesnakes. He did not believe in marriage and became a vegetarian later in life. He did indeed go barefoot, even in snow, and wore old ragged clothing, or even an old sack with holes, and a tin pan for a hat, but not because he was poor. It had more to do with his belief that he would be rewarded in heaven for his abstinence and frugality, and also the fact that many folks paid for their apple trees with their own garments.

Another common belief of most folks today is that Chapman planted apple trees as a source of food. Actually, his trees produced largely sour and bitter apples we would consider unfit to eat. In reality, John's trees were used in the production of cider, specifically, hard cider. To quote writer Michael Pollan "Up until Prohibition, an apple grown in America was far less likely to be eaten than to wind up in a barrel of cider. In rural areas cider took the place of not only wine and beer but of coffee and tea, juice, and even water."

It is probably true that a family farm in Nova Ohio still has the last remaining tree ever planted by John, but sadly, most of his orchards didn’t survive a lot longer than he did.
John died in 1845 and during Prohibition, apple trees were often chopped down by FBI agents. True story! Research suggests he owned about 1200 acres of valuable land at his death, not a poor man by anyone’s standards.

As a child, what did you learn about Johnny Appleseed? In my opinion, the fictional part of the Johnny Appleseed tale is much more fun than the real-life story. What do you think? 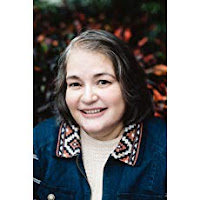 Cindy Regnier, author of Mail-Order Refuge, works for her local school district as clerk of the board of education and is active in her church and community. Her experiences with the Flint Hills setting, her natural love for history, farming and animals, along with her interest in genealogical research give her the background and passion to write heart-fluttering historical romance.