They Put the Stuffing Where?? 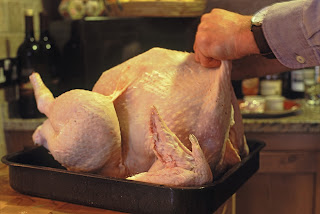 Who was the first to do that?
A question I often ask myself, especially when the subject makes little to no sense. Who was the first to open a clam and thought, Yummy! I’ll bet that slimy membrane is tasty. I’m going to suck it right out of there. Or frog legs. Hey, Buford. Pass me one of them croakin’ toads. I’ll bet them legs taste just like chicken. And don’t even get me started on Rocky Mountain Oysters. Look it up.

Who was the first to take a turkey and cram food in . . . there? The answer surprised me, and no, it wasn’t the pilgrims or their indigenous guests. There’s no evidence of stuffed food on the first Thanksgiving.
The earliest recipe came from a Roman cookbook around the first century AD. It was created by a chef named Apicius and entitled, Apicius: de re Coquinaria, (culinary art). Among a wide variety of ancient recipes are several for stuffed game and domestic animals. It’s like Apicius became hyper-focused and grabbed everything that wandered by the kitchen. Chicken, rabbit, pig, dormouse.

Dormouse.
Whatever would fit into a rodent? In most of his dishes, Apicius mainly used vegetables, herbs, nuts, chopped liver, and brain.

Among other organs. And I thought giblets in my mother’s stuffing were gross.

Another succulent delight also dates back to the ancient Romans. Stuffing an animal with an animal. This technique is called engastration.

Could any cooking term be more unappetizing? Ok, spatchcocking comes to mind. Precisely why I don’t cook.
One such engastration recipe called for a cow stuffed with a pig stuffed with a goose stuffed with a duck stuffed with a chicken. The practice has continued to this day, the most notable being the turducken, or a turkey stuffed with a duck stuffed with a chicken, all deboned. Cajun chef Paul Prudhomme claimed to have invented this combination in the 1970s. I remember when this one hit the news. I thought it was a joke. However, it is, apparently, quite tasty. The English version is gooducken, replacing the turkey with a goose.
I can’t pin down when bread was first used as a base for stuffing. Stale bread seems to be the most popular, or cornbread. I wonder if it had to do with the “waste not, want not” mentality. My mother would set out slices of bread the day before to dry. Rice was used in Mediterranean dishes. 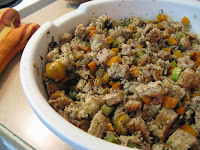 Somewhere in the mid-19th century, the term for stuffing was changed to dressing. Many attribute it to the delicate Victorian sensibilities who found the former word crude. (No matter what you call it, sweetheart, the food still goes in . . . there.) The two terms wrestled for dominance until they finally found their footing, albeit as soft as the fluffy substance itself. Stuffing is now more referred to as the blend actually cooked in the cavity. Dressing is normally baked in a casserole and served as a side dish, although many still use the words interchangeably.
I have no problem eating stuffing that came out of the bird, although I tend to flick the offending giblet pieces to the side. I also am fine with homemade dressing prepared in a casserole dish.

Titanic: Legacy of Betrayal
A TIME-SLIP NOVEL
A secret. A key. Much was buried on the Titanic, but now it's time for resurrection.

Kathleen E. Kovach is a Christian romance author published traditionally through Barbour Publishing, Inc. as well as indie. Kathleen and her husband, Jim, raised two sons while living the nomadic lifestyle for over twenty years in the Air Force. Now planted in northeast Colorado, she's a grandmother—and soon-to-be great-grandmother—though much too young for that. Kathleen has been a longstanding member of American Christian Fiction Writers. An award-winning author, she presents spiritual truths with a giggle, proving herself as one of God's peculiar people.