One of the oldest Christmas hymns known to man is, “God Rest Ye Merry Gentlemen.” In fact, it is so old that no one actually knows who wrote this. What historians do know about this famous hymn is it was the only song in Charles Dickson’s A Christmas Carol.

(A Christmas Carol was first published on December 19, 1843) and “God Rest Ye Merry Gentlemen” appeared in Shakespeare’s 1599 play entitled As You Like It. 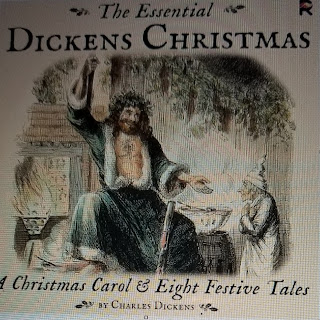 God rest ye merry, gentlemen
Let nothing you dismay;
Remember Christ, our Savior
Was born on Christmas Day
To save us all from Satan's pow'r
When we were gone astray 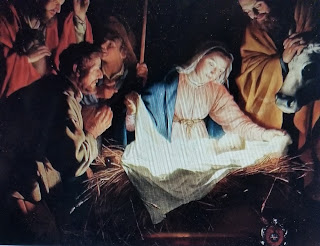 The custom of exchanging Christmas gifts began with the wise men and shepherds who brought their gifts to the Christ child.

Nicholas was very young when he became bishop, and it was his kindness and loving nature that won him the respect of schoolboys and adults alike. He would leave the warmth of his cozy fire to tread beneath the cloak of darkness and quietly leave his gifts for a needy family. That nameless benefactor, not wanting his good deeds known, has become world-renowned.

However, renown for his name didn’t happen till after his death, when he became the patron saint of Christmas in the Netherlands. It was then that St. Nicholas’s fame spread far and wide. The French know him as Père Noël; La Befana by the Italians; and Christkindli by the Swiss. The Dutch who settled in New York called St. Nicholas, Sint Nicolaas. American children could not pronounce his name so they called him Santa Claus. 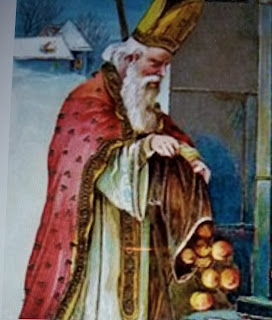 With our distinct American style, our interpretation of this good saint, Santa Claus, evolved. It was Washington Irving’s picture of a fellow resembling a typical Dutch settler in the state of New York, In A History of New York dating to 1809 that began the legend. Irving pictures the saint as a guardian of New York. He’s a right jolly-looking fellow with a broad-brimmed hat and huge breeches.

It wasn’t until 1823, from the immortal pen of Clement C. Moore, American minister, and poet, that Santa became a robust, fun-loving saint who loved to enter houses through chimneys, “dressed all in fur, from his head to his foot.” He could pack anything and everything in his large bag and still make it down anyone’s chimney, no matter how small that chimney may be. With his twinkling eyes, snow-white beard, and “nose like a cherry,” this friendly saint has filled many a child’s night before Christmas with dreams full of “visions of sugar plums.” Santa always rode out of sight in his sleigh driven by eight flying reindeer. Later, Rudolf was born to lead the way on foggy nights. Moore’s poem was first named “A visit from St. Nicholas” but later; it was called “The night before Christmas.” 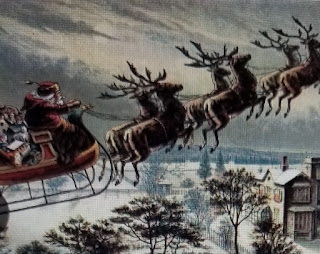 If Nicholas returned today and saw that his giving spirit had replaced the real reason for Christmas, what would be his response?

If Washington Irving and Clement C. Moore could walk the sidewalks of New York, Boston, or Los Angeles, what would be their reaction? Would they wish they never had thought up the jolly old Santa with the twinkle in his eye if it meant our current generation would forgo the real Christmas message of the Savior of our world wrapped in swaddling clothes lying in a manager “To free all those who trust in him From Satan's pow'r and might” (“God Rest Ye Merry Gentlemen” third stanza). How can a just God compete against Santa who grants wishes like sugar drops as did the witch in C.S. Lewis’s The Lion, the Witch and the Wardrobe? 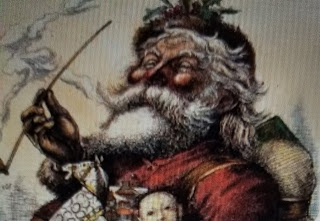 Modern-day Americans are taught a new type of freedom, born not from sacrifice—but entitlement. Our forefather’s liberty is being replaced with the WOKE movement and politically correct ideals. Our children and grandchildren seek a college education only to find themselves immersed in the indoctrination of godless and socialistic ideals.

Is the salvation message of Jesus lying in a manager a forgotten symbol for Christmas?

Below are the complete lyrics of “God Rest Ye Merry Gentlemen.” The author is unknown; however, the lyrics continue to ring with the truth about the real meaning of Christmas:

God rest ye merry, gentlemen,
Let nothing you dismay;
Remember Christ, our Savior
Was born on Christmas Day
To save us all from Satan's pow'r
When we were gone astray

In Bethlehem, in Jewry
This blessed babe was born
And laid within a manger
Upon this blessed morn:
The which his mother Mary
Did nothing take in scorn. [Refrain]

From God our heav’nly Father

And unto certain shepherds

Brought tidings of the same,

How that in Bethlehem was born

The son of God by name. [Refrain]


“Fear not,” then said the angel
“Let nothing you affright;
This day is born a Savior,
the true and radiant light,
To free all those who trust in Him
From Satan's pow'r and might.” [Refrain]

Now to the Lord sing praises,

All you within this place,

And in true love and fellowship

Each other now embrace;

This holy tide of Christmas

Is filled with heav’nly grace. [Refrain]

There is nothing wrong with the idea of Santa, Christmas trees, and gift exchanging. Only, where is the Christ Child? Has the god of this world blinded today’s generation’s eyes from the Truth? Only if you allow this. Jesus started with twelve apostles (one of them betrayed Him.)

In America, we still have freedom to let our voices be heard—the fate of Christmas and our Christian beliefs rest on your shoulders. Don’t betray Him—your voice is needed more than ever now. 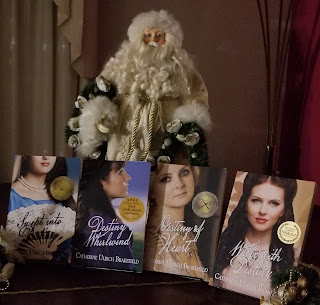 CHRISTIANITY—ROMANCE—PATRIOTISM in a sweeping saga of true-to-life adventure:

Get whisked into the lives of the McConnell women in this historical Christian fiction four-book series by Catherine Ulrich Brakefield. Follow these strong women from the days of the Civil War through the epic battle with Hitler. Discover what has inspired readers all across the world as these four books are brought together as a set for the first time.

"The message of the Destiny series is even more applicable today than when it first released. Praying for America’s repentance and to embrace God like never before." Debra B.

Catherine is an award-winning author of the inspirational historical romance books: Wilted Dandelions, Swept into Destiny, Destiny’s Whirlwind, Destiny of Heart, and Waltz with Destiny.

She is a longtime Michigan resident. Catherine lives with her husband of 50 years, has two adult children, and four grandchildren. See https://www.CatherineUlrichBrakefield.com for more information about her.

Posted by Catherine Ulrich Brakefield at 3:30 AM