Way back in January, I announced this year’s 2022 Stolen Art Series. Now it’s December, and this series is coming to a close. Though I may write about stolen and missing art again—it is one of my favorite topics!

Over the past few months, we’ve traveled back in time to art thefts that took place in Europe, the United States, Canada, and Asia. Not all the thefts involved famous paintings. Thieves also steal jewelry, figurines, vases, amber, and even Faberge eggs.

Though my artistic talent could fit in a thimble, an art motif often pops up in my fiction even when I don’t plan for it. My interest began about ten years ago when I stumbled across a documentary about Nazi looting during World War II. I’ve been fascinated by this subject ever since.
The amount of looting that took place in such a relatively short period of time is astounding.

According to Greg Bradsher, the Nazis looted approximately twenty percent of Europe’s art—both from public and private locations. It’s been estimated that over 100,000 items—including china, crystal, and silver—has never been returned to their rightful owners.
"The Nazi art confiscation program,” Howard Spiegler writes in an article published in the Connecticut Journal of International Law, “has been called the greatest displacement of art in human history."
Additionally, the Nazis were determined to collect and destroy Jewish books and writing. Take a look at these staggering numbers compiled by Mark Glickman.

· 4,000 volumes from the Federation of Jewish Societies of France

· 20,000 books from the Lipschuetz Bookstore

· 28,000 from the Rotschild family’s personal collection

Thousands of books were also stolen from other Jewish families.

According to Glickman, both the Jewish Community Library and a library owned by the Italian Rabbinic College were located at Rome’s central synagogue. He writes that the Germans shipped all the books to Germany in 1943.

As I wrote in last January’s post, the Allies put together the Monuments, Fine Arts, and Archives unit—more commonly known as the Monuments Men—to protect, find, and recover historic buildings and stolen cultural artifacts.
Additionally, the Office of Strategic Services (OSS)—the forerunner of the CIA—created the Art Looting Investigation Unit in November 1944. They were tasked with gathering information on the massive looting, prosecuting war criminals, and providing restitution when possible (DFS; Hussey).

Here are two of my favorite book/movie combos—one featuring the Monuments Men and the other dramatizing the legal battle of one Jewish family against the Austrian government. 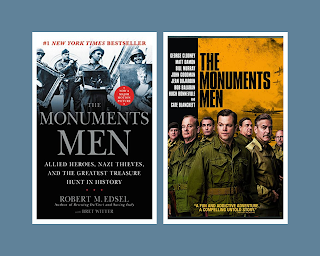 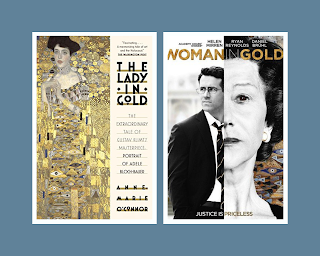 Of course, none of this loss compares to the millions who lost their lives in the horrific war and all those who are still bearing the scars caused by this worldwide tragedy.

In case you missed any of this year’s posts about other notorious thefts, here’s a round-up.

The Three Thefts of Russborough House

The Unsolved Mystery of the Amber Room 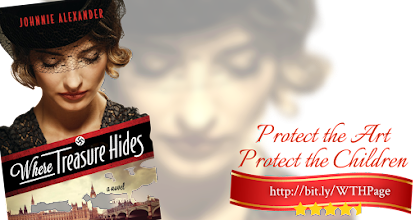 Photo Credits ~ All photos (except the book/movie collages) are in public domain and were downloaded from "Nazi Plunder" (Wikipedia).

DFS. “The OSS and the Search for Looted Art.” New York State Department of Financial Services (DFS). (Originally retrieved 10 May 2017 for Wikipedia article titled “Nazi Plunder” which was retrieved for this post on 6 December 2022.)

Posted by Johnnie Alexander at 3:30 AM