Our Finest for the Fuhrer

If you were getting married in Germany between 1933 and 1945, you could expect to receive a special gift, much like some couples receive a family Bible from their church today. You’d be the proud owner of the wedding edition of Adolf Hitler’s Mein Kampf (“My Struggle”), in a slipcase with the seal of the province embossed in gold on a parchment-like cover. This edition was published with a leather spine and would contain an extra presentation page in the front with blanks for the names of bride and groom and the signature of the mayor of the city, town or village. Hitler hoped that Mein Kampf would eventually replace the Bible in German households. 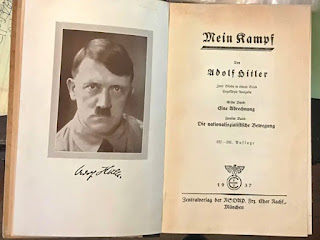 Exactly eighty years ago today, Adolf Hitler ordered German troops at Stalingrad to fight to the death. To do anything other than obey was unthinkable—at least to Hitler. The word Fuhrer means “Leader” in German, but it holds much more significance, thanks to Hitler giving himself the title and all it stood for. The 13 million Germans who voted for the Nazi party in 1932 were fed up with life as they knew it. Adolf Hitler brought strength, charisma, and an “everyman” persona to the ballot with his humble origins. Voters were ready to reject privilege and embrace this “man of the people.”

Short of food and clothing, many German soldiers were freezing or starving to death. Yet, discipline and obedience to authority prevailed. Finally, knowing that resistance no longer served any useful purpose and to save the lives of his remaining men, Field Marshal Friedrich Paulus disobeyed Hitler and surrendered.

Hitler had assumed that Paulus would fight on or take his own life. Nevertheless, when Soviet forces closed in on Paulus’ headquarters in a ruined department store, Paulus surrendered. The remnants of the German forces in Stalingrad surrendered on February 2, 1943. The Soviets took 91,000 tired, ill, and starving Germans captive. To their delight, and to the dismay of the Reich, the prisoners included 22 generals. Hitler, humiliated and understandably angry, stated that Field Marshal Paulus “stood at the doorstep of eternal glory but made an about-face.”

With the benefit of hindsight, we often wonder how people could have been so duped by Hitler or any other dictator. Countless books and commentaries by writers far smarter than I explain the phenomenon that allows humans to be brainwashed—oh so gradually—until it’s too late. By then, seeing the truth is too painful. Admitting we may have been wrong is too humiliating. And standing up for what’s right becomes deadly. Is anyone among us immune?

Perhaps this is another area where historical fiction can come to our aid in understanding. If you’ve read The German Wife by Kelly Rimmer, it’s easy to see how good people can be drawn into an ideology like Nazism. It’s also simple to understand how anti-Nazi thinking led to discrimination against North American Germans in the war and post-war years.

The bottom line? Any time you sense extreme nationalism, or a necessity for the absolute unity of the population behind a single charismatic leader, or the supremacy of the good of the nation over the rights of individuals—beware.

novels. Rose Among Thornes won the 2022 Word Award for best cover and the Debra Fieguth Social Justice award. Lilly’s Promise won the Braun Book Award. Terrie lives with her husband, Jon, in Portage la Prairie, Manitoba, Canada where they raised their three children. They are grandparents to five boys.

Orphaned and adopted as a toddler in 1922, Lilly Sampson pursues a nursing career in hopes it will redeem the shameful crime of arson she committed as a child. When her self-sabotaging choices only build the ash heap higher, Lilly prepares to sacrifice everything for the sake of a child she tried to abort. Can Lilly reconcile with the one person who shares all her secrets and find the strength to raise a son with special needs?

2019: While unraveling a mysterious link in her ancestry, 36-year-old Diana DeWitt is fear-stricken by the two most staggering invitations of her life: to adopt a teenager’s baby, and to marry her best friend. Will the truth Diana uncovers about her Grandmother Lilly release the grip of rejection and free her to embrace a life she only dreamed of?