The Viking name brought fear and foreboding up and down the coastlines of England, France, Germany, Ireland, Italy, and Spain between the 700s and 1100s. The Vikings were bloodthirsty pagans who pilfered, plundered, killed and captured women and children. They killed, stole, and burned anything that crossed their path. Churches throughout Europe had a special prayer vigil concerning the Vikings and would chant, “God, deliver us from the fury of the Norsemen.”*

The world trembled hearing the name Viking! Especially when their dragon-like ships with their mammoth billowing sails pounded the waves, heading toward some distant shoreline—only no one knew where they would land. The Vikings would hide their boats, then pounce on unsuspecting villagers.

The Vikings spoke a German dialect that resembled the language spoken in England today. They were also called Northmen, Norsemen, or Danes. A Nordic people, their ancestors were of the Norwegians, Swedes, and Danes of today. They were skillful and daring seamen and efficient shipbuilders. The ships were propelled with oars and with a single sail to help in maneuvering. They carried small crews of 30 to 40 men. These skillfully made ships allowed the Vikings to go anywhere with them.

The Viking raiders struck swiftly and brutally with a zest for fighting and the efficiency of a surprise attack, and before anyone could muster a counterattack, they were gone! 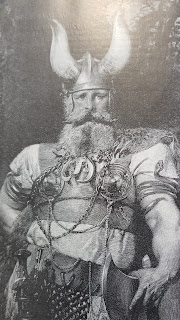 None was more barbaric than the man whose hot-headedness and murderous temper had given him the lofty title of Eric the Red. Because of his fiery temper, red hair and beard, he was thought to have Irish blood coursing through his veins. He’d been first banished from Norway and then Iceland. It seemed that only a continent of his own would give any of his enemies ease. So, Eric the Red discovered and settled on Greenland, becoming the first European settler.

The only thing Eric the Red hated more than his enemies on Norway and Iceland, was Christianity. He’d slice a man in two if he professed his Christian faith or if he was caught wearing a cross!

Eric the Red’s son knew all of this. Still, a new wind blew against the heartstrings of Leif Erikson. The tide of his conscience shifted beneath his feet, and Leif could not deny it. He believed. Leif Erikson converted to Christianity. To make matters worse, it was King Olaf of Norway and the bishop who baptized Leif into Christianity.

King Olaf and the bishop asked Leif to spread the Christian faith throughout the lands, especially to Greenland, and to convert the Norse settlements.

While other converts hid their crosses beneath their clothing, Leif boldly displayed his and returned to Greenland with a zeal and a hunger to introduce this new religion to his father’s pagan colony. The worst of the pagans being his own father.

For about two years, he and the priest met with the villagers throughout Greenland, teaching them about Christianity. Telling them about Jesus and teaching the Ten Commandments, forgiveness, and another life without sorrow and pain—their heavenly home that awaited them.

Leif’s mother accepted this new religion without hesitation. His father never did.

Leif wasn’t satisfied. He felt as if God was urging him to discover new lands. He felt a new Viking spirit-stirring in his heart.

His ancestors, even his father, had accepted that challenge and discovered Greenland. Leif’s newly awakened faith in God spurred him into action.  More lands to discover, people to witness to, villages to convert. All the world needed to feel the Holy Spirit’s guidance and to learn about this True God, and His Son, Jesus Christ. 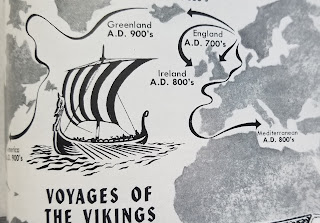 Leif set sail west somewhere in AD 1003 to seek a strange land once rumored of. At the time, it was thought the world was flat and that at any moment their ship could fall off the edge—or be eaten by fire-breathing dragons. Many of his crew members, though Christians, still believed in the old pagan superstitions. A number of times they wanted to turn back. After all, when the wind didn’t blow, all they could do was row. Rowing was exhausting work, and supplies were becoming scanter by the day.

Historians believe that Leif first sighted the land of Newfoundland, and then sailed along the coast to Cape Cod and Rhode Island. No one knows for sure.

In an Ottilie A. Liljencrantz book, and in the screenplay by Jack Cunningham, based on that novel The Thrall of Leif the Lucky, says it was in Newport, Rhode Island, where Leif Erickson landed and planted the first wooden cross, met the first Native American, and built the first watch tower. He stated, “Let this cross and the tower I have built be the signs of peace and friendship between us.”

Leif Erickson set foot on American soil approximately half a millennium before Christopher Columbus did and for the reason of spreading the Good News about Christianity.

The watch tower stands to this day in Newport, Rhode Island.

On September 2, 1964, Congress authorized the president of the United States to proclaim October 9 of each year as Leif Erikson Day.

To this day, historians continue to argue as to the direct landing of Leif and his crew (Leif left no maps). However, this unreversible truth remains.

Leif set sail for a distant land that turned out to be America, under the belief that the earth was flat.

With only the wind to guide him, his new faith to sustain him, Leif did what was considered impossible. God blessed Leif Erikson’s faith and commitment to his Christian beliefs. Leif safely returned to Greenland and after Eric the Red died, Leif became Greenland’s ruler.

Leif set down the first cross, built the first watch tower, and church and witnessed to the heathens of America about the one true God and His Son, Jesus Christ.

For this new year, what is inhibiting us from making a resolution not to fail our forefathers, or men like Leif Erikson in spreading far and wide our Christian beliefs and faith—no matter what the oppression? 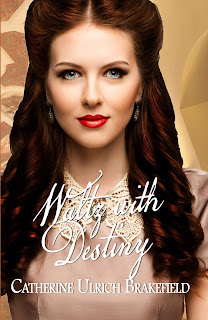 Waltz with Destiny: The splendors of Detroit's ballrooms spin Esther (McConnell) Meir around like a princess in a fairy tale when she meets the handsome Eric Erhardt. Japan bombs Pearl Harbor and suddenly it’s a battle for survival. Eric is drafted into the Army and faces insurmountable odds traveling up the boot of Italy. 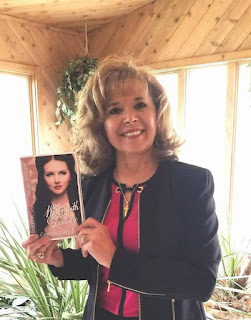