Sweet Sixteen: The Date, Not the Age!

Pam Hillman here... I’ll be your hostess the 16th of every month.

I was born and raised on a dairy farm in and spent my teenage years perched on the seat of a tractor raking hay. In those days, Daddy couldn’t afford two cab tractors with air conditioning and a radio, so I drove the Allis Chalmers 110. Even when Daddy asked me if I wanted to operate the baler, I told him I didn’t mind raking. Raking hay doesn’t take much thought, so I spent my time working on my tan and making up stories in my head. Now, that’s the kind of life every sixteen-year-old girl should dream of!

From an early age I loved horses and all things western. I was a bit of a tomboy and cut my teeth on Louis L’Amour westerns. Our neighbor’s husband worked in the oil fields of and was gone months at a time. She’d invite my brother and me over to watch John Wayne movies on Friday nights. We’d have popcorn and soda, or she’d bake a butter cake (the smell of hot butter cake fresh from the oven still makes my mouth water!).

Writing a novel reminds of making mud pies as a little girl. You just get in there and have the best time ever playing in the mud, forming pies in the tin pie plates Mama let you borrow from her kitchen. Getting it all out there is fun and exciting. Cleaning it up can be a little daunting, but sticking with it yields great results, and then the final cleanup with my editors is even more thrilling. I use a spreadsheet to plot turning points, starting with the big picture, drilling down to each act, each chapter, then each scene. Then I layer in more texture in my second and third pass. By the time the final draft goes to my editor, I hope the novel has plenty of yummy goodness and not a trace of that mud pie remains!

I’ve always loved stories involving the great Westward expansion, and television shows such as Bonanza, Little House on the Prairie, and Gunsmoke. The western writer, Louis L’Amour, kept me mesmerized with his tales of cowboys and Indians, outlaws, prim schoolteachers, hot dry deserts and boom towns.

My love of the old west and lifetime of country living bring authenticity to my work and depth to my characters, something that has been recognized many times in the industry through writer’s awards. My work has placed in dozens of writer’s contests, including being a four-time finalist in Romance Writers of America’s prestigious Golden Heart contest for unpublished novelists with Claiming Mariah, my second novel, winning the coveted Golden Heart. My debut novel, Stealing Jake, is a 2013 Epic eBook Awards finalist.

I’m excited to be part of CFHS. 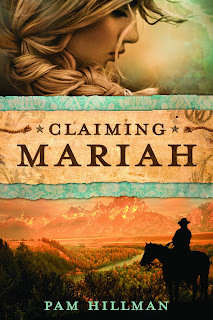 1880’s : In light of her father’s death, Mariah Malone sends a letter that will alter the lives of her family. When Slade Donovan, strong willed and eager for vengeance, shows up on her front porch, Mariah is not ready to hear his truths: her father’s ranch, the only home she’s ever known, was bought with stolen gold. With Slade ready to collect his father’s rightful claim and force Mariah and her family out on the streets, Mariah must turn to God for guidance. Though Mr. Fredrick Cooper, a local landowner, promises to answer her financial woes if she agrees to be his bride, Mariah finds herself drawn instead to the angry young man laying claim to her home…and her heart.

The Prize Vault is Open!

www.pamhillman.com
Posted by Pam Hillman at 1:00 AM