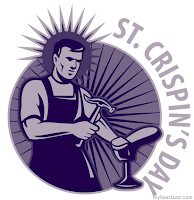 If ever I Saint Crispin’s day forget
may my feet be never free from wet,
But ev’ry dirty street and lane pass through
without one bit of sole to either shoe.

In colonial times, a cordwainer was a shoemaker as opposed to a cobbler. Cobblers had as much as five years less training than cordwainers and were often prohibited by law from making shoes.
Shoemakers had arrived in Jamestown, VA, by 1607, and were flourishing by 1616. Christopher Nelme, a British shoemaker, arrived in Virginia in 1619. He was the first officially recorded shoemaker in America. Thomas Beard, the first shoemaker in Plymouth, arrived in 1629. Some resources say that Captain John Smith was a cordwainer, but this was never established.
Before leaving England, each colonist was allotted four pairs of leather shoes called “Well-Neat Leather” shoes. Colonists walked everywhere, and with the rough conditions in the wilderness of the new world, all four pairs of shoes wore out quickly, and were expensive to replace.
Working shoes were fully welted and made from heavy leather on the top and bottom. The earliest shoes did not have buckles but were secured with overlapping straps. They were made on a straight form, which means that there was no right or left shoe. Shoes could be worn on either foot. To ensure an even wear and to make the shoes last longer, men and women would shift the shoes from one foot to the other.

Boot making was the most sophisticated and prestigious branch of the trade. By tradition, the making of boots and shoes for men and the making of shoes for women were separate pursuits. Dancing shoes had lighter soles and were usually made out of material.
The shoemaker’s took kit included items with names such as “helling sticks,” “petty-boys,” and “St. Hugh’s Bones.” 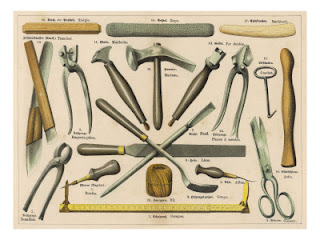 There’s an interesting story about St. Hugh, a prince of Britain in 300 AD, who fell on hard times and became a shoemaker who preached the gospel.   He fell in love with a woman who was arrested and condemned to death for her devotion to God. He too was condemned because of his association with her. It is said that his fellow shoemakers held a vigil during his execution while he was made to drink poison. He was so destitute, all he had to leave behind were his bones. After his death, his friends pulled his body from the gibbet and distributed his bones. These were made into shoemaking tools. Hence, the name “Hugh’s Bones.”

Cordwainers in New England set up small shops, sometimes in their homes, where they made shoes on request.  For custom made shoes, models were made of people’s feet. These models, called lasts, were carved out of wood and kept for subsequent shoe orders. Large plantations usually had a shoemaker to maintain the families’ shoes.
Cobblers travelled from town to town, exchanging shoe repair for room and board and circulating news and gossip. They sometimes used a unique shoemaker’s lamp, an oil lamp with water-filled globes that amplified the light at the work area.
Saint Crispin is the commonly recognized patron saint of shoemakers, though there have been others. Since medieval times, October 25 has been celebrated as St. Crispin's Day feast day and the shoemakers’ holiday. Boot and shoemakers would close their shops on this day in celebration. 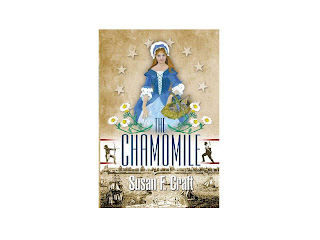 My prize will be a copy of my Revolutionary War romantic suspense, The Chamomile, as well as a packet of chamomile flower seeds, and a mobcap (the white ruffled cap that most colonial American women wore.)