They Never Sleep: The Pinkertons

Allan Pinkerton was a Scottish immigrant and barrel maker who accidentally discovered a talent for catching criminals—in his case counterfeiters using a neighboring island in the Fox River as their base. Meanwhile, Allan’s brother, Robert, was also using his wits to catch bad guys, first as a railroad contractor and then as a provider of guards for the Wells Fargo coach line.
The brothers joined forces in 1850, and the Pinkerton National Detective Agency was born along with the motto “We Never Sleep”. Their three-story Chicago building boasted their logo, an eye painted in black and white, that was the origin of the term private eye.
According to the Pinkerton Agency’s website, www.pinkerton.com/historywww.pinkerton.com/history, the Pinkerton Code is as follows:


Pinkerton agents were well trained and well paid. Their expertise in surveillance was beyond comparison. Allan Pinkerton was an early proponent of using female agents, determining that often it was the lady who was least suspected of being a detective.
One famous lady Pinkerton was the widow, Kate Warne, thought to be the clean-shaven person standing behind Mr. Pinkerton in the photograph from the Library of Congress archives. Kate Warne, a woman who it is claimed walked into the Pinkerton offices seeking a secretarial job only to leave as a detective, is one of the more memorable Pinkertons, and definitely the first female agent. 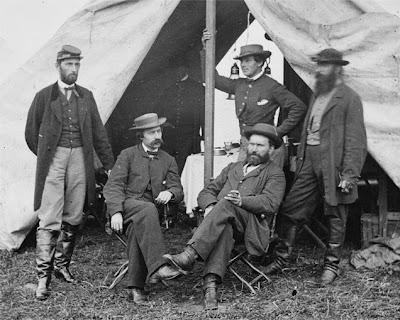 Among Mrs. Warne’s many accomplishments was the detection of a plot against President-elect Abraham Lincoln. Not only did she learn of the plot, but she also saved the president’s life by helping to smuggle him into Washington DC for his inauguration disguised as her invalid brother. Later, during the Civil War, it has been alleged that Mrs. Warne was quite adept at fitting in on both sides of the lines and brought back valuable intelligence to the Pinkerton offices. Quite the accomplishment considering women were not yet accepted as valuable members of any other crime fighting organization.
Such is the legacy of agents such as Warne and her fellow Pinkertons that the agency is still in existence today. Now called Pinkerton Government services, they employ more than 4,000 security officers and claim a 90% government security clearance rate. Thus, even today, Pinkertons are on duty.

Bestselling author Kathleen Y’Barbo is a multiple Carol Award and RITA nominee of forty-five novels with almost two million copies of her books in print in the US and abroad. A Romantic Times Top Pick recipient of her novels, Kathleen is a proud military wife and an expatriate Texan cheering on her beloved Texas Aggies from north of the Red River. To find out more about Kathleen or connect with her through social media, check out her website at www.kathleenybarbo.com.

Flora Brimm, a not so prim and proper Natchez belle with four fiances whose untimely deaths kept them from arriving at the altar has just discovered she is the subject of a Pinkerton investigation and just may be engaged to a jewel thief. Meanwhile Pinkerton agent and inventor Lucas McMinn is trying to decide whether the lovely lady is part of the solution or the problem. Southern historical with a dash of steampunk, Flora's Wish is in stores now.
Posted by Kathleen Y'Barbo at 1:00 AM