Rise Up and Walk!

This week, I’m celebrating a huge personal milestone. As many of you know, I have dealt with constant back issues since I was assaulted by a patient some 28 years ago. It was my ‘thorn’ as Paul would put it, and after several years of being angry at God, I finally accepted it as part of this race I’m on.

But a few years back, the pain increased to the point where I could barely function. Sitting and standing became impossible, and I found myself flat on my back for the majority of my days. I was terrified by the possibility of surgery but when weighted against the unbearable pain, Danny and I decided I didn’t have any other choice. So, today, exactly one year ago, I gave this problem over to the Lord and went under the knife. 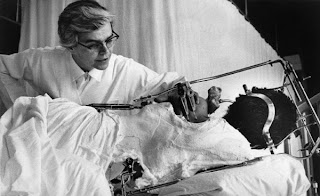 Which is why I took noticed of the recent obituary of Dr. Jacquelin Perry in the New York Times.  Dr. Perry passed March 11th at the age of 94 after a life dedicated to studying the complexities of walking and developing surgical techniques to help polio victims in the 1940s and 1950s regain their capacity to walk.

Studying the complexities of movement is an extraordinary feat, but Dr. Perry broke the act of walking down into eight movements using twenty-eight muscles. By using this method, she was able to develop surgical techniques for straightening curved spines and fusing vertebrae. She also helped with inventing a device to help polio victims break their dependance on the iron long by provided extra support for their neck muscles--a vest with a ring encircling the head called a ‘Halo.’

As I continued to read Dr. Perry’s obituary, a fresh sense of gratitude fell over me. Here was this woman, born in 1918 who pushed aside the expected norms of her day to become not only a doctor, but an orthopedic surgeon passionate for helping those once thought beyond help.  Because of her research and work in the fields of polio and spinal fusion, I’m walking and sitting relatively pain free after my spinal fusion, writing my stories and enjoying my life for the first time in years.

Thank you, Dr. Perry! Thank you for letting God use you!