Living on the Frontier

Homes and Kitchens From Yesteryear by Martha Rogers

As I shared last month, cooking in the 19th century was no easy task for the women in the family. As families moved west, lifestyles changed. A family on the prairie may have lived in a dirt soddy that served as their home until one could be built. Those who moved into heavily timbered areas had natural resources at their fingertips to build log cabins or larger farm houses for the family. Some of these old farmhouses are still standing today.

No matter how many were in the family, most log cabins were about ten by twenty feet. Smart women maximized the space by having the men build lofts across the cabin roof or lean-tos across the rear of the cabin. Typically, frontier cabins featured only one room, which served as kitchen, dining room, living room, workroom, and bedroom. Finding a family of six to ten living in these cabins was quite common in frontier days.

These log cabins or wood frame homes sprang up across the land in areas where timber grew in abundance. However, in the treeless lands of the plains, the homesteaders turned to the ground beneath their feet to build shelters. The sod house, or “soddy” was the most common in the frontier west.

The long, tough grasses of the plains had tight, intricate root systems, and the earth in which they were contained could be cut into flexible, yet strong, bricks. Settlers used rain or snow soaked earth for construction. They used an ox or horse drawn sod cutter to harvest long, narrow strips of sod which was then chopped up into two to three foot squares about four inches thick. These were stacked to form the walls of the structure. They then used interlacing twigs, thick branches, and hay over another layer of sod for the roof of the structure. Many were built into the side of hills or high embankments because it saved time by having to build only a front wall and a roof.

Cooking in these log cabins and sod houses was a challenge for the cooks. Many settlers draped the ceilings of their sod houses with cheesecloth or muslin to catch falling debris. If they didn’t, some of that debris would wind up in the food. 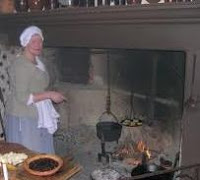 The open hearth presented the easiest way to cook and vent holes were left to insure proper ventilation for the fireplaces. Large cast iron pots hung by hooks over the fire. Some had openings that served as ovens in the early homes. One rule of thumb for the frontier housewife was this bit of advice: Always take two to three steps back from the fire before turning away. This will keep your swishing skirt from catching on fire as you turn around. Sounds like good advice to me.

The equipment a cook may have in her kitchen contained the usual pots and pans and stirring utensils much like what we have today, but they had none of the more modern conveniences we use to make their cooking easier. Wooden spoons mixed the batters instead of electric mixers. Many kitchens had racks where their equipment could be stored. As seen the pictures, handles had loops or curved ends so they could be hung over the racks.

Another type of kitchen cabinet appeared in homes with larger, separate kitchens and held more pieces the cook needed to prepare meals. It was also used as a preparation station. My great-grandmother actually had a similar cabinet in her kitchen and it was painted white. In the upper left bin, she stored flour and it came down the "shoot" you see under it. That "shoot" was also a sifter. Everything she needed was right at her fingertips.

Many cooks in later years established a "mixing center" in their own kitchens and kept all equipment for mixing and baking in one location. Today, with our convenience food, frozen foods, mixes and take-out, kitchens may not have as much equipment as our ancestors, and what we do have is far more convenient than that of the 19th century.

I hope you've enjoyed this foray into the past. Even if you don't cook much anymore, you can appreciate what you do have in your kitchen today. 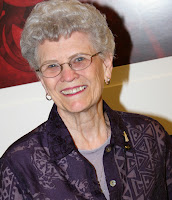 Martha Rogers is a free-lance writer with fourteen novels and novellas published. She also writes a weekly devotional for ACFW. Martha and her husband Rex live in Houston where they enjoy spending time with their grandchildren and attending football, baseball, and basketball games when one of the grandchildren is playing or performing. She is a member of several writing groups. The first book in her new series, Love Stays True, releases in May, 2013.


My cast iron skillets are my favorite kitchen utensils and I use them for everything from cornbread to frying chicken to pineapple upside down cake.

Leave a comment and tell me about your favorite piece(s) of kitchen equipment or utensils.