The Scottish in Me

Louise Gouge here, wearing the plaid and celebrating my Scottish heritage, just as Cynthia celebrated hers yesterday. As promised last month, I’m continuing to discuss my ancestral connections who came to the shores of what is now the United States. 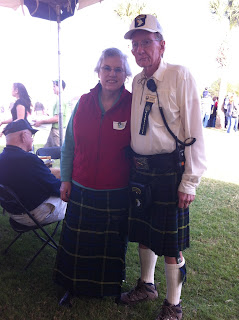 I don’t have a great deal of information to go on with my Scottish heritage except that my paternal grandmother’s maiden name was MacCaskill. Like many Scottish surnames, this spelling is just one of many, but most of them seem to refer to a “sept” of the Clan MacLeod of Lewis. (There’s also a MacLeod of Harris.) Historically in Scotland, a sept was a smaller clan (family) that attached itself to a greater clan for protection and shared resources.


A Proud Heritage
But being a smaller sept didn’t mean the MacCaskills were considered inferior. One William MacCaskill led the entire MacLeod clan against a fleet at Clanranald at Eynot. No doubt he was chosen to lead because the MacCaskills were skilled seamen and sailors. In the mid-nineteenth century, Angus MacAskill (note different spelling, but same family) grew to be 7 feet 9 inches tall. Naturally, he was called The Giant. 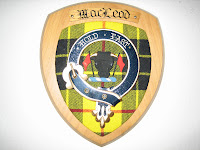 This is the MacLeod of Lewis crest. I love that the motto is "Hold Fast." No wonder I'm so tenacious! That's a bull in the center. Yes, I suppose I can be bull-headed sometimes. The background plaid is the MacLeod tartan.


How would you like to call this little place home?
ere’s a picture of the Clan MacLeod family seat at Dunvegan Castle (for over 800 years), the oldest continuously inhabited castle in Great Britain. Rather romantic looking, don’t you think?
My family loves to participate. 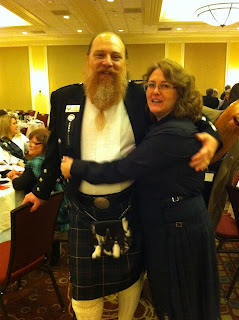 Some years ago, my younger son became interested in his Scottish heritage, having married a lovely lassie whose father is from Scotland. (Her father has that charming accent and even plays bagpipes!) They became involved with organizing the Central Florida Scottish Highland Games, serving on the Games committee, and eventually pulling my husband and me into the fun. Here are Timothy and Heidi Gouge at the 2013 Central Florida Scottish Highland Games kickoff dinner. 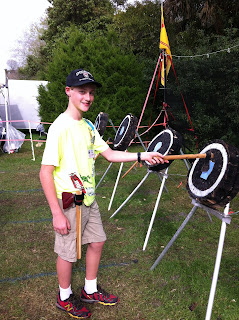 The Next Generation
Now we have the next generation joining us. This year, our twelve-year-old grandson entered the Games and placed second in his age group (which went all the way up to 15) in the ax throwing contest. Way to go, Forest.

In addition, this year the Central Florida Scottish Highland Games were honored to have a Princess Merida lookalike (from Disney’s movie Brave). Here’s Miss Caitlyn Boyd all the way from Scotland posing with my beautiful granddaughters, Savannah and Emmy. Emmy looks like she just stepped out of that MacLeod castle, doesn't she? 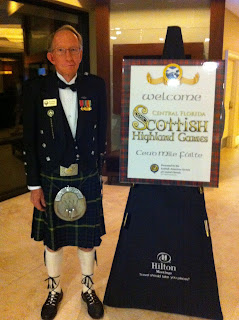 No doubt you remember that those Scots were a rowdy bunch and often fought amongst themselves, as well as fighting the English. But the annual Games are a wonderful way to celebrate all the best of Scottish culture without any of the crazy stuff that makes up every people group. My favorite thing is to see my dear hubby in his dress kilt made from the United States Army tartan. Those medals on his chest were earned in Viet Nam, where he served in the 101st Airbourne.

And yes, I love haggis, that unique Scottish culinary delight, which I suspect American Scots have adapted to our more tender appetites.


Coming up next time

In the next couple of months, I’ll be discussing my other ancestral connections, including some of those empire-building English and a few poetic Welshmen. The Welsh connection is a bit vague, but it shows up in the DNA, so I hope to find out some interesting details. Please come back to see what I’ve learned.

You gotta love these giveaways! 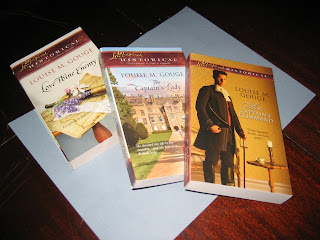 Do you have a Scottish connection? I’d love to hear about it. Leave a comment, and be entered in our drawing. At some time this month, I’ll be giving away a set of my Revolutionary War novels from Harlequin’s Love Inspired Historicals.
Thanks for stopping by!
Florida author Louise M. Gouge writes historical fiction set in England and the U. S. Visit her Web site at http://blog.Louisemgouge.com
Posted by Louise M. Gouge at 1:00 AM