** I'm one of several offering a giveaway this month. Read to the end to find out the details and what is being offered.

All right, last month, I discovered just how little most folks know about the DuPont and Nemours family in the little state of Delaware. Most have heard the name and are familiar with some of the products they've manufactured, but the majority had no idea of their history. Perhaps one day I'll be writing books featuring them more.

And speaking of books, I ended up getting a one-month extension on my current book, so it isn't done yet. It's hard having to request those extensions, as I don't like to *not* meet my deadlines. I was doing great for a while there too. Then, the kids got sick off and on for 5 weeks, and it put me behind schedule. So, once this post is done, it's back to the storyboard to finish the revisions.

For now, let's move on to Mackinac.

How much do you know about Mackinac Island? Perhaps you've visited there and had the fortune of walking the largest front porch in the world at The Grand Hotel?  Or maybe you've sampled some of the famous Mackinac Island Fudge? You might have even seen the movie, Somewhere in Time starring Jane Seymour (Dr. Quinn) and Christopher Reeve (Superman). Or, perhaps your experience is limited to books, photos, and stories...like me. 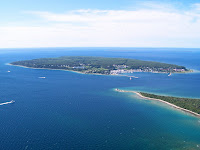 Well...long before Americans set foot on this soil, natives stood on the mainland shore, looked out over the Straits between two newly formed great lakes (a result of retreating glaciers) and saw an island with unusually high bluffs. They thought it resembled a large reptile and called it mish-la-mack-in-naw or "big turtle." A bit of exploration revealed natural limestone formations, and the caves became burial grounds.

French-Canadian courieur de bois Jean Nicolet is believed to be the first white man to see Mackinac during his explorations on behalf of Samuel de Champlain, governor of Canada, in 1634. It didn't take long for the area to become a key fur trading site for the French. The British acquired the island in the French&Indian War, and from that point until 1815, the island went back and forth in ownership between the British and the Americans, eventually being restored to the Americans by treaty.

During the 1800's, the island became the center of John Jacob Astor's American Fur Company and eventually became a well-known site for fisherman, processing barrels of fish for eastern markets, driving out Astor's company and forcing him toward the northwest states. This began the growth of small hotels and eating places which catered to the sporting crowd. The families in my Michigan Brides series (Copper and Candles, Hearts and Harvest, and Patterns and Progress) vacationed on Mackinac every summer, making that overnight train trip from Detroit to the Straits aboard the Michigan Central. 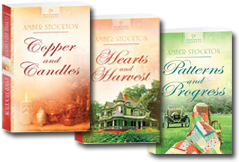 It was Victorians, like the families I portrayed in my books, who made Mackinac Island one of the nation's most favored summer resorts. In the post-Civil War industrial age and before automobiles, vacationers traveled by large lake excursion boats from Buffalo, Cleveland, Chicago, and Detroit, to the cooler climate of Mackinac Island. They danced to Strauss' waltzes, listened to Sousa's stirring marches, dined on whitefish and strolled along the broad decks. To accommodate overnight guests boat and railroad companies built summer hotels, such as the Grand Hotel in the late 19th century. Victorians, like travelers everywhere, shopped for souvenirs, and Mackinac shops supplied them.

In the 1890's wealthy Midwestern industrialists who wanted to spend more than a few nights on Mackinac built their own summer cottages on the east and west bluffs. Soon a social life developed, including tennis, hiking, bicycling, examining the local natural wonders, and at the turn of the century, golf on the new Wawashkamo Golf Course.

The first impression most visitors get of Mackinac Island is the absence of automobiles. In fact, no cars are allowed on the island. When Somewhere in Time filmed there, they had to get special permission for the car Christopher Reeve drove by the Grand Hotel. Visitors and residents travel by foot, bicycle or horse drawn carriage. This tempo is more comparable to the 19th century. Tour carriages and taxis will take you wherever you want to go and eventually, you adjust to the slower pace.

In my current book, tentatively titled Threads of Time, I have a bookworm heroine and a footloose/fancy-free best friend who chides her about Mackinac being the perfect vacation spot, considering how old-fashioned she is. She even remarks about the hotel having indoor plumbing. :) Of course, my heroine (Alyssa Denham) also assures her friend the island has all the modern conveniences such as electricity, telephones, running water, and even all the wonderful resort activities her best friend (Libby Duncan) wants to experience.

The best part about this island is Congress took steps in the early 1870s to ensure that some of the "old-fashioned" treasures would be preserved for posterity. In 1872 the federal government designated Yellowstone America's first national park. In 1875 portions of federal land on popular Mackinac Island were given similar protection.

When the Park Commission purchased a Victorian cottage near Fort Mackinac in 1945 and designated it the Governor's Summer Residence, it's led to a number of politicians beating a path to its door. John Kennedy rocked on the porch with Governor G. Mennen Williams in 1960 and won his important support for the Democratic nomination that year. And more recently Bill Clinton, Newt Gingrich, and Bob Dole conferred with state politicians here.

And to tie this back into writing, many famous people have penned words inspired by the island's beauty:

And of course, I've already mentioned Somewhere in Time (1979), but in 1946, there was also a romantic tale of lost and found love called, This Time for Keeps, starring the famous swimmer Esther Williams and Jimmy Durante.

So, what did you find the most fascinating about this history? What would you like to know more about? Have you ever been to this island? If so, what is your favorite aspect of the island? If not, what intrigues you and makes you wish you could visit?

Leave your answer to any one of the questions along with your name and email address (name [at] domain name [dot] com) for your chance to win a complete autographed set of my Michigan Brides series. A second winner will win an autographed copy of Threads of Time, but it doesn't release until August 2014. Rest assured, I'll keep your information on file and contact you ahead of time to be sure your address hasn't changed.

Posted by Tiffany Amber Stockton at 12:00 AM