A Short History Of The Wristwatch

Hi.  Winnie Griggs here.  On an out of town trip I took a while back I lost my wristwatch.  I just looked down at my wrist at some point and it was gone.  No doubt the leather strap or the buckle broke - but regardless of what happened, it was nowhere to be found.   Since I’m lost as a goose without a watch, I immediately rushed out to the nearest department store and picked up a replacement.

And because this has become such an indispensible accessory for me, it got me to wondering about just when folks started wearing timepieces on their wrist.  I did a bit of research and it turns out that wristwatches have not been in general use nearly as long as I’d imagined.

True, there are some examples as early as the 1500s - in fact  Queen Elizabeth I was said to have been given one as a special gift.  But even so they were few and far between and were usually pieces specially commissioned for royalty..

That changed in the middle of the 19th century.  But even then men still clung to their pocket watches, viewing wristlets, as they were called at that time, as a feminine and foppish adornment.  In fact, men were quoted as saying they  “would sooner wear a skirt as wear a wristwatch”.

The watch making community itself was at least in part to blame for this.  They looked down on them as inferior timepieces.  Because of their size, few believed they could achieve an acceptable level of accuracy and the vast majority of those being produced were made as decorative pieces with delicate fixed wire or chain link bracelets.

All of that began to change when military men discovered how useful these hands free timepieces could be in battle situations.  Soldiers found pocket watches difficult to handle while engaged in physical combat and began to fit them into makeshift leather straps to wear on their wrists. Not only did this leave their hands free for other things, but being able to check the time at a glance instead of having to dig through their pockets gave these soldiers a strategic advantage over those less well equipped, especially when synchronization of activities was critical.

Officers in the South African Boer war (1899-1902) were the first to use wristwatches extensively and were not afraid to sing their praises.  By World War I, the military not only encouraged but began to demand them for their troops.

By the 1920s, wristwatches had become the most popular type of personal timepiece among both men and women.  Rolex is credited with creating the first water resistant watch, a model of which was worn in 1927 by a female channel swimmer.  Both Amelia Earhart and Charles Lindbergh wore wristwatches for their celebrated transatlantic flights.  Today, wristwatches have become as much a symbol of status and style as a utilitarian instrument to tell time.

While I have one watch that I wear most often - my go to watch if you will, I will admit to being somewhat of a collector - having one for just about every mood and occasion.  Over time I've amassed a rather large collection - below is a photo.  Some of these were gifts from friends and family who know me well, some of them were impulse buys when I stumbled on one I couldn't resist or that would fit in perfectly for some special occasion event I was attending. 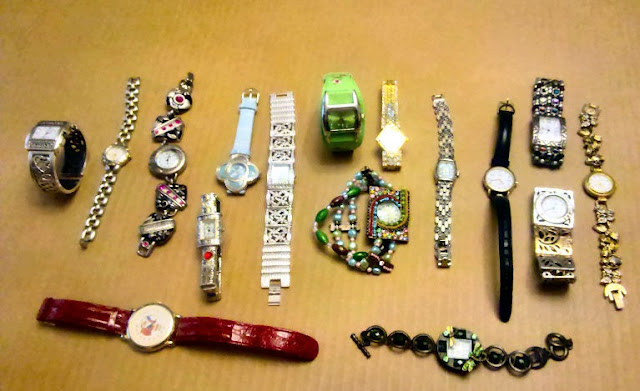 So what about you?  Do you feel the need to wear a wristwatch most of the time or are you like a friend of mine who'd rather not be bothered with it?  And if you wear one, what is your personal style - do you select your watch(es) purely for their function, or do you look for one that reflects something of your style and personality?
Posted by Winnie Griggs at 1:00 AM